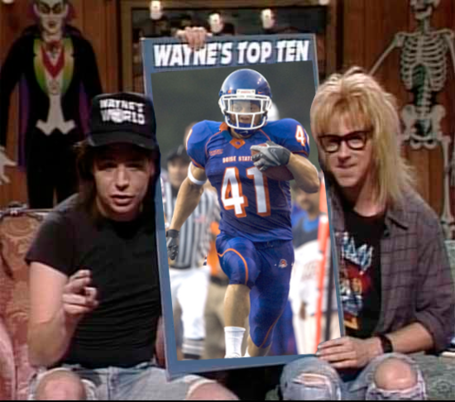 The running back position at Boise State has produced a first-round NFL draft pick, a record-setting touchdown machine, a three-time All-American, and a big fat Boise State wedding. How could anyone possibly rank these guys? Throwing darts blindfolded is a start. Here's OBNUG's dart board.

10. David Mikell (Class of 2003) - Beginning with a six-touchdown freshman year, David Mikell was a scoring machine, be it on the ground, through the air, or when teams went against their better judgment and kicked off to the guy. He is fifth on Boise State's career TD list with 39 in four years, and that's not bad for a player who never really had the backfield to himself until his senior year. That season, Mikell ran for 1,142 yards and 13 scores and came up big in two of Boise State's biggest games with 235 yards against Idaho and a 75-yard TD run against TCU in the Fort Worth Bowl.

9. Terry Zahner (1980) - Zahner enjoyed the spotlight as one of Boise State's Four Horsemen, along with QB Joe Allioti, FB David Hughes, and RB Cedric Minter (see below). Zahner actually got the better of Minter their freshman year, finishing with an honorable mention Big Sky honor. The speedy Zahner's 205 yards rushing against Northern Arizona was a single-game Bronco record that lasted for all of ... three games, when Minter topped it.

Zahner's most famous contribution was a the flicker in a flea flicker TD pass that provided the winning points in Boise State's playoff win over Grambling. Way to flick those fleas, Terry Zahner. 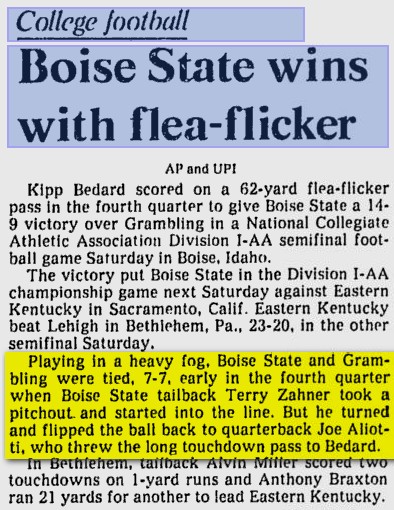 8. Rodney Webster (1983) - After the Four Horsemen, there was the Lone Ranger, Rodney Webster. After a freshman year watching Minter and Co. run their way to a national championship, Webster put together two 1,000-yard seasons in his next three years, earning all-Big Sky honors in 1981 and 1983.

7. John Smith (1975) - Smith holds Boise State's career mark for rushing average at 6.24 yards per carry. His quality-over-quantity running style also earned him a spot at No. 1 and No. 3 on the single-season rushing average list and three of the best single-game marks.

Smith not only was an effective runner but also was a top-notch receiver. Fun fact to impress your Bronco friends: Smith had 1,623 career rushing yards and 1,608 career receiving yards (with an 18-yards-per-catch average). Boy, can't wait to see your friends' reaction to that one, followed by a quizzical, "Who's John Smith?"

6. David Hughes (1980) - One of the most talented fullbacks you ever will see, Hughes was not just a block-headed battering ram but also a certified offensive weapon. He rushed for over 1,800 yards during his illustrious career and capped it with a DI-AA championship, alongside Minter, Zahner, and Allioti.

Until Ryan Clady came along, Hughes was the highest Boise State draft pick ever, going No. 31 overall to the Seattle Seahawks. He led the Seahawks in rushing in 1984 (with 327 yards, not the best rushing attack the NFL has seen), the first year that the team made the playoffs.

5. Chris Thomas (1991) - If you were to look up "consistency" in the Bronco Wikipedia that I am currently working on, Thomas' name would be there. He had at least 800 yards rushing in each of his four seasons of work at Boise State, earning all-Big Sky honors for the final three. Like many Bronco backs, Thomas returned kicks (including a 94-yarder for a score against Northern Arizona), and his 4,800-plus all-purpose yards are sixth-best at Boise State all-time. You'll also find Thomas in the record books for carrying the ball a ton (second all-time to Brock Forsey), scoring all the time (32 TDs), and cracking the 100-yard mark (13 times during his career).

4. Brock Forsey (2002) - Perhaps Boise State's best all-purpose player ever, Forsey is tops on the Broncos' career all-purpose yardage list with 6,670 yards - a full 1,300 yards ahead of runner-up Cedric Minter. Over 4,000 of those all-purpose yards came from rushing, including a senior year's worth of 1,611 yards. That senior season was something else. Forsey led the nation in scoring with 32 touchdowns and was named the WAC Offensive MVP in what had to be a pretty easy vote.

His 68 total touchdowns remains a school record, and he is third all-time in rushing yards. The NFL liked watching him tear up WAC defenses enough to make him a fifth-round pick of the Chicago Bears. Not bad for a former walk-on.

3. Doug Martin (2011) - Once coaches found a way to work Martin into the backfield (he was on defense for awhile, which sounds bizarre in hindsight), Martin's career took off. In basically three seasons of work, Martin scored 47 touchdowns and ran for over 1,200 yards as a junior and a senior. His running style could best be described as beautiful anger, as he ran with a combination of power and moves that you don't see too often in a running back. His qualities were rare enough that the Tampa Bay Buccaneers took him in the first round of the NFL Draft. Now Shiloh Keo cannot watch any Bucs games without thinking of this:

2. Ian Johnson (2008) - Perhaps Boise State's most notable face, Johnson burst onto the national scene with a sophomore season that included 1,714 rushing yards (No. 1 all-time at Boise State), 25 touchdowns, a first-team All-American selection by Sports Illustrated and CBS, an eighth-place Heisman finish, a Fiesta Bowl win in dramatic fashion over Oklahoma, and a highly convenient marriage proposal on live TV after the game. The rest of his career failed to match that lightning-in-a-bottle sophomore season, but still, Johnson finished as Boise State's second-leading rusher all-time and the WAC's career TD leader. He is now speaking motivationally around America and chasing the NFL dream on practice squads.

1. Cedric Minter (1980) - Boise State's all-time leading rusher, Minter was a three-time All-American and all-Big Sky player who formed the lead horse in the Broncos' famed Four Horsemen backfield. A local high school product, Minter burst onto the scene with a 210-yard game during his freshman season, one of four 200-yarders he would get before his career was up (he holds the single-game record with 261 yards against Northern Michgan; poor Northern Michigan). Those big games and his propensity for big gains make his career rushing record look even better since it comes with a 5.95 yards-per-carry average, which is third-best all-time.

If there is an all-time-anything team, Minter is probably on it, including the Big Sky's Silver Anniversary offense, the Boise State 35 Team, and the Bronco Hall of Fame. He now is OBNUG's top BSU running back of all time, so he should maybe clear some shelf space for that, too.