It's palindrome day again, which really just means that we're 11 days closer to kickoff than we were on the last palindrome day. Math can be fun.

We've got 66 days until kickoff, but that roster number was recently vacated by center Thomas Byrd, so today I'll highlight a player who could wear the number in the future—Steven Baggett 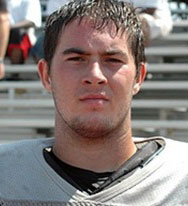 Texas recruiting really picked up last year and Baggett is proof, as the Broncos snuck into TCU's back yard and got a commitment from the future O-lineman. Baggett is plenty seasoned, having started 38 games for the powerhouse program. Steven garnered first team all-area and first team all-district honors as a senior guard and was able to snag honorable mention all-district recognition as a sophomore and a junior as well. Baggett was given a 3-star rating by Scout.com and chose the Broncos over offers from Air Force, New Mexico State and Western Kentucky.

Who ever said the mafia never gave us any good nicknames? 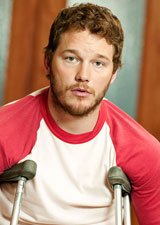 Andy Dwyer from Parks and Recreation

Baggett was probably going to redshirt anyway—nearly all O-lineman do—but after seeing his current measurables via Broncosports.com, I'll make Baggett my stone-cold lock of the decade to redshirt. I don't know if Baggett wrestles in the offseason to cut weight or just got a case of mono...but currently our future guard weighs about 40 lbs. less than our starting fullback—this has to change (and will). I have no idea as to whether Baggett's current weight is correct, mind you—Broncosports has been prone to typos in the past and his Scout.com profile has him at 260, but whether he needs to put on 55 lbs. or 15 lbs. (minimum), he's got a little ways to go to be at an ideal weight to play guard. The good news is that gaining weight is a whole lot funner than losing it, and he'll have his requisite redshirt season to gain some ground. The other good news is that the Broncos put much less emphasis on girth with their O-line than other institutions tend to, valuing athleticism and versatility above all. Of course, if Baggett can't gain the desired weight he could always transfer to Air Force, where 225 lb. guards are welcomed to blow out opponent's knees. I'm kidding, obviously, we want Steven on The Blue and not into the blue yonder.