We're through one month of countdowns...that should make you feel good on this first second day of summer.

We've got 70 days until kickoff, but that roster spot has yet to be claimed so today I'll highlight a player who could wear the #70 in the near future—Darien Barrett 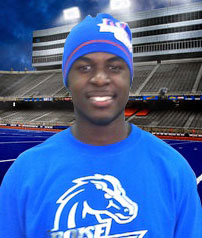 By way of U-turn. Barrett was apparently all set to sign with San Diego State (he'd verballed) but spurned the Aztecs after taking a late January trip to The Blue™. How late? About 3 days before LOI day...close call. Barrett's complete high school stat lines are hard to come by, but we do know that he was an All-Ocean League first-teamer as a senior after making 42 tackles (4 for loss), 10 sacks and 2 forced fumbles. Like I stated before, Barrett chose the Broncos over his one other offer from SDSU. I could probably tell you more about Barrett's prep career, but this video will explain more thoroughly than I ever could: 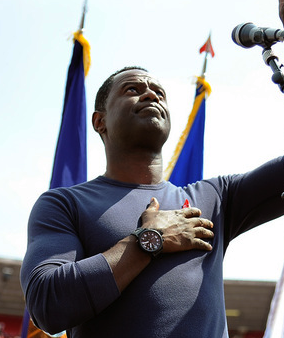 Very intrigued by Barrett. Very. After coming "late to the party" as a last-minute signee with the Broncos, we didn't get as much opportunity to break down Barrett the recruit. Now, given the right opportunity to shine a light on the freshman—I really like what I see. In fact, the more film I see of Barrett the more I like him—kind of like the opposite of that kid that played young Anakin in The Phantom Menace. Take a look at this video of Barrett going against some of the best recruits on the West Coast at USC's football camp and tell me you can't see this kid contributing in a hurry.

He has very good closing speed, a good motor, and has the height to be disruptive and jam up the passing lanes. Very good skills to have in a light year for the D-line. Barrett still needs to add a few lbs. to his frame, but he's probably already in better shape weight-wise than some of our other new DEs. If pressed, I'd say that the Broncos might be able to afford a redshirt for Barrett with a presumptive top 4 of Lawrence, Koontz, Ukwuachu, and Horn. Beau Martin has also been getting some good press and we all know that Kharyee Marshall is capable of making noise. If my math is right, that looks to be 6 lightly-seasoned DEs for this year—probably about how many the Broncos will end up playing. Any injury or other forms of attrition could leave a spot open for another youngster to get some playing time—that youngster would be either Sam McCaskill or Darien Barrett, in my opinion. Both fit the mold of the STUD DE/OLB hybrid (McClellin backer) quite well. Camp performance always reshuffles the depth chart, however...and the coaches have no qualms whatsoever about playing true freshman—provided they're playing better than their counterparts. Seeing Barrett in 2012 is probably about 50/50 right now...but if there were any year to play a freshie on the D-line, this would be it.

Darian is the great-grandson of Asa Barrett, the man that coined the phrase "Talk to the hand". Of course, Asa, wasn't trying to be sassy at the time, but had been born with his ears attached to his palms.