Why Craig Thompson deserves to be Bronco Nation's Public Enemy No. 1

Share All sharing options for: Why Craig Thompson deserves to be Bronco Nation's Public Enemy No. 1 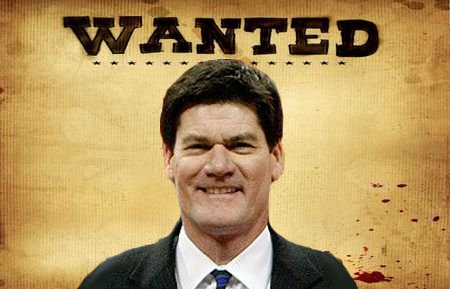 Time to name the next Public Enemy No. 1. I say we name him "nubbie." Craig Thompson's case is heard today. Others to follow.

One year from now, Boise State will no longer exist under the Dep-soaked reign of Mountain West commissioner Craig Thompson. The Broncos will be free - free to wear whatever uniforms they want and free to rule the Big East as they see fit. Thompson's Mountain West has not been all bad for Boise State, but Thompson as commissioner? Eh. I have a rule to never trust someone whose hair does not conform to the natural laws of physics. This is why I never got on board with Jimmy Johnson.

There are many reasons for Bronco fans to loathe Craig Thompson - his stringing the Broncos along with a MWC invitation, his playing hardball with Boise State's Olympic sports, his overseeing the Mountain West exodus of all good teams. And the icing on his Public Enemy cake is the blue-on-blue uniform ban. Years from now we will tell our grandkids and robot servants the story of how a football team was told to change its clothes because its clothes looked like its field. Our robot servants will be so confused. The inanity of the rule is one thing, but the real maddening part is Thompson's caving to the vocal minority among the conference's coaches and administrators. Sure, Rocky Long is loud, but that doesn't mean he has to get what he wants. Just talk over him.

These final months of Mountain West residence may give us a few more reasons to hate Craig Thompson (e.g., Boise State must play conference games with 10 men because 11 is an unfair advantage). But if his resumé stops at grudge-holding, flip-flopping, and Tim Gunn-ing, I think we have enough evidence to vote him as Boise State's Public Enemy. So let's do that. Vote in the poll below.