Share All sharing options for: ESPN: Boise State never deserved a shot at the national championship 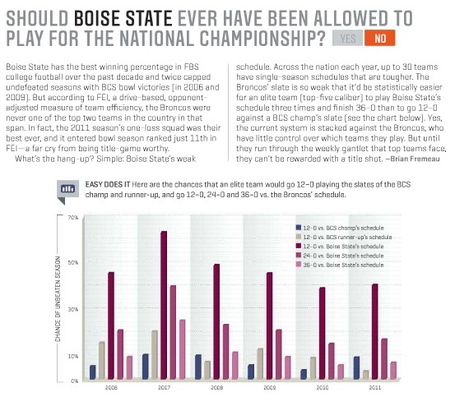 The latest ESPN the Magazine seeks to settle a variety of sports debates, none as important to Bronco fans as the age-old "Should Boise State ever have been allowed to play for the national championship?" ESPN's conclusion: Nope.

The fishwrap of the Worldwide Leader surmises that Boise State's schedule, replete with WAC nobodies and Mountain West cupcakes, was never strong enough to justify the Broncos' inclusion with the top teams in the country. Boise State did not deserve a title shot because the schedule was weak, an argument that gets a "hear-hear" from most of America and a "whaaat?" from Boise, Idaho. I will go so far as to say that this argument has merit, mainly in that the concept of deserving is so subjective. ESPN thinks BCS conference teams deserve BCS championship spots. I think every team in Division I-A deserves one.

The Broncos were never one of the top two teams in the country (over the past 10 years).

How do you know the Broncos were never a top two team? Twice in the past 10 years they beat everyone on the schedule. We'll never know if those teams were top-two-worthy because those teams never got a chance to prove it on the field. To discredit their football prowess based on eyeball tests or computer formulas (ESPN chose the latter) is irresponsible.

Now about that debate of who is the greatest NFL running back of all-time? Jim Brown. Nailed it. (And for good measure, No. 2 is Barry Sanders and No. 3 is Future Doug Martin.)

What do you think about the strength of schedule argument? Do you buy it? Did Boise State deserve a shot at a national championship? Share your thoughts in the comments.