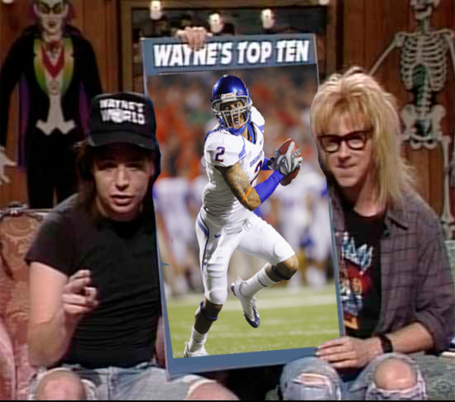 Wide receivers - can't live with 'em, can't live without 'em. Though they may have a reputation for being divas and bad blockers, the Boise State collection of wideouts also has a rep for being really incredibly good. Just take a look a the honorable mention list at the end of this post and tell me any Mountain West team wouldn't kill to have those guys in their school's uniform.

The Top Ten of all-time Boise State receivers is below, including a guess at how to settle the eternal debate of Austin Pettis or Titus Young (or Don Hutt).

9. Jeremy Childs (2008) - The Bronco record holder for single-season receptions, Childs was on track for the top of Boise State's WR record books before deciding to turn pro after his junior year. Still, his Bronco career was Top Ten-worthy, as his three-years' worth of receptions (168 total) are fourth-best all-time and he was named first-team All-WAC twice. If only he hadn't listened to that NFL draft adviser née magic eight ball.

8. Ryan Ikebe (1996) - Before Austin Pettis and Titus Young came along, it was Ikebe and Don Hutt atop the Bronco record books. Ikebe's stretch during the 1990's was the best of a decade's worth of great WR play, and he ended his career as Boise State's all-time leader in receiving yardage and second-best to Hutt in catches and touchdowns. His four catches for 140 yards and two touchdowns against Appalachian State in the 1994 I-AA playoffs were a career highlight.

For reasons that are not immediately clear, Ikebe was never an all-Big Sky pick. Maybe the Big Sky was too afraid it might mispronounce his name (sounds like Don Beebe, not High Dweeb).

7. Lou Fanucchi (2002) - With over 130 catches and 2,500 yards for his career, Fanucchi broke a 27-year-old Boise State record for career receiving average with a robust 19.49 per catch. The record lasted two years before Lawrence Bady topped it by half-a-yard (on only 59 career catches).

Fanucchi was one of an explosive wide receiver trio during the Ryan Dinwiddie heyday, piling up yards and catches along with wideout friends Billy Wingfield and Jay Swillie. His career receiving record was buoyed by touchdown catches of 97 yards (second longest all-time), 87 yards, and 80 yards, and he was named All-Big West his sophomore year in 2000 before the Fanucchi-Wingfield-Swillie triumvirate caught fire and split votes during the WAC era.

6. Mike Holton (1976) - Nicknamed "Motormouse" (a relative of Mighty Mouse, I presume?) for his mouse-like speed (mice are fast, I presume?), Holton finished his career with 139 catches, 2,300 yards, and three all-Big Sky honors. He was an honorable mention All-American in 1974 and 1975. He is second all-time in career 100-yard receiving games with 11, including a clinic he held under the guise of a football game against UNLV where he went for 14 catches and 252 yards, both Top Five marks all-time.

5. Al Marshall (1972) - The Robin to Don Hutt's Batman (or the Pettis to Hutt's Young or the Young to Hutt's Pettis, depending on who you ask), Marshall provided a deep threat for the dangerous early-70's teams of Tony Knap. His senior season of 1972 is one of nine 1,000-yard seasons in Boise State history, and his play that year earned him all-Big Sky and All-America honors.

4. Kipp Bedard (1981) - A star at local Capitol High School and a transfer from THE Notre Dame University, Bedard helped Boise State to its I-AA national championship in 1980 and then helped himself to spots all over the Bronco record book. His 1,100 receiving yards in 1981 stood as the single-season Boise State record for 21 years, and during his three years with the Broncos he was named All-Big Sky three times (with assorted All-America honors twice).

How's this for a clutch performance: In the 1980 championship game, Bedard had 11 catches for 212 yards, including three big grabs on Boise State's frantic, last-minute, game-winning drive.

3. Austin Pettis (2010) - With the finest hands you will ever see on a wide receiver, Pettis caught a lot of passes at Boise State - like, more than anyone. His 229 career receptions is an all-time Boise State record, and his 2,800 receiving yards are second all-time. His propensity for catching things also included touchdowns, and Pettis remains the record holder for career TD grabs with 39 - nine scores better than runner-up Don Hutt. Before Tyler Shoemaker's greedy 16-TD catch season last year, Pettis also held the single-season record with 14 TD passes in 2009, the highest mark that Bronco fans had seen in 35 years. 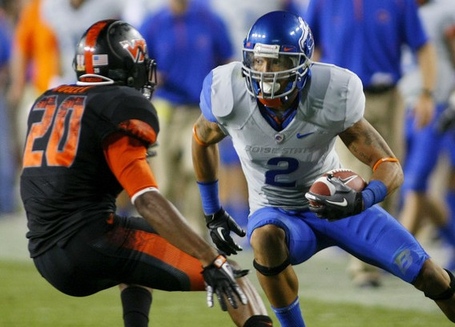 2. Don Hutt (1973) - Before there was Austin Pettis and Titus Young, there was Don Hutt - the obvious Best Bronco Receiver of All Time. If you account for inflation from receiver stats of the 1970's to the receiver stats of now, Hutt was right up there with the best of them. For his career, he had 189 catches (third all-time behind Pettis and Young), 2,728 receiving yards (fourth all-time), and 30 touchdowns (second all-time). His records stood for decades before the new crop of receiving talent burst onto the scene.

A three-time Big Sky first-teamer and a three-time All-American (honorable mention twice and first-team once), Hutt was the first and only Boise State wide receiver to be drafted into the NFL until Legedu Naanee, Pettis, and Young came along 25 years later.

1. Titus Young (2010) - Records? Young's got 'em. He holds the career and single-season marks for yards, including two of the nine 1,000-yard seasons ever at Boise State. He is runner-up to Pettis in receptions and fourth in touchdowns (unless you count kickoff return TDs, which he has loads of). A two-time all-WAC pick, Young may have been the most explosive player in Boise State history, a fact that the NFL and the Detroit Lions recognized and in so doing drafted him No. 44 overall in 2011. He may go down as the most accomplished pro wide receiver to come out of the Bronco offense factory, considering his rookie year included a Bronco-alumni-best 48 catches, 600 yards, and six scores. 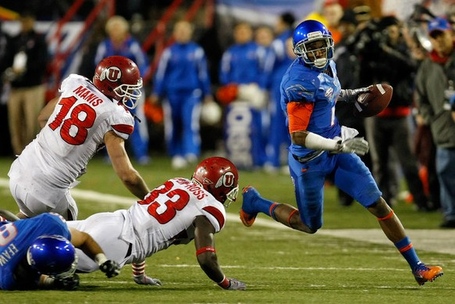