We're inching ever closer to the Broncos date with density destiny in East Lansing. Of course, I've had my game face on since February.

We've got 78 days till kickoff, so today I'll be highlighting #78 on the Boise State roster—Charles Leno

As a three-year letter-winner in basketball at San Leandro, Charles Leno might not be the guy you'd expect to draw comparisons to All-Pro offensive tackle Ryan Clady, but that's exactly what many are saying about the big, athletic lineman. Of course, Leno played a little football at the Oakland-area high school as well—gaining first-team all-conference honors as an offensive tackle and second-team all-conference honors as a defensive end his senior year. But rather than bore you with further accolades from his prep career, take a look at what ESPN said about Leno shortly before he committed to play for the Broncos in the class of 2009:

Leno is on prime time when he's on the field. He has very good size and is extremely athletic. Runs more like a tight end than a tackle; gives great effort when leading downfield on the screen pass or getting crossfield to pick up a defender.

I'm foregoing the usual Jay Leno/Late night talk show angle this year. Plus, tell me he doesn't totally look like a "Chuck" 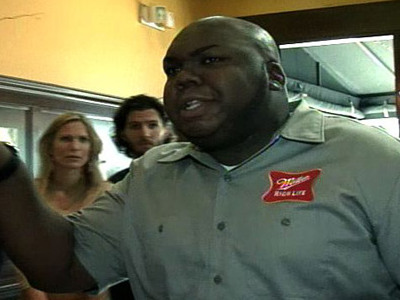 Selected Bay Area "Cream of the Crop" while at San Leandro. Named first-team All-Metro. Made two game appearances in 2010 and even made the tight end depth chart due to injury. Started all 13 games at right tackle for the Broncos in 2011 (one of only two O-lineman to start every game; the other—Nate Potter).

Not a lot to say about Leno's prospects in 2012. He'll be the starter (likely at right tackle) unless something crazy happens. And I'm talking "Ryan Clady decides to come back for long-posponed senior season" crazy. Or...I guess, an injury /knocks on wood. Leno was solid for the Broncos last season and I see know reason why he won't be again. Kellen Moore was hardly ever sacked...the running game looked pretty darn good—what more could you want? The real question mark is hovering over the left tackle spot with the 2012 season looming. There's a possibility that Leno could move to LT if they feel a more natural fit at RT emerges...but it isn't broke, so I doubt they'll try to fix it. Leno should be the easy #1 on the depth chart now and into the Fall and will probably be backed up by either Faraji Wright or Michael Ames—the O-lineman being so interchangeable that it's hard to say which. One thing is certain, however— Leno is not moving to guard...even after adding 16 lbs. of bulk to his frame since last year. His footwork and athleticism, as referenced in the ESPN blurb above are tailor-made for the position and he'll be one of the stars on the O-line for the next two years.

Leno and Joe Kellogg once went to Golden Corral and ate so much the restaurant had to be closed. To this day, Leno is still known as "public enemy number one" among Boise's senior citizen community