Five Boise State defensive linemen from last year's Bronco defense are camping with NFL teams this summer, so you could expect a significantly recent flavor to BSU's all-time D-line list. But don't forget about the college Hall of Famer and Boise State's all-time leader in sacks. Lesson: Boise State has always been good at defensive line things.

10. Michel Bourgeau (Class of 1983) - The Montreal native lettered as a freshman on Boise State's national championship team and went on to earn all-Big Sky honors for the 1981 and 1983 seasons (plus an honorable mention All-America in '81 to boot). He was named to the Big Sky's Silver Anniversary D-line, and his pro playing career included a cup of coffee with the New Orleans Saints and defensive tackle stops with the Ottawa Roughriders and Edmonton Eskimos.

9. Billy Winn (2011) - Names a freshman All-American by the Sporting News, Winn anchored the Boise State defensive line during one of the best stretches of Boise State defense ever. One of college football's biggest crimes was that Winn never was named first-team all-conference anything, forced to settle for second-team honors twice in the WAC and once in the Mountain West. He finished his career with 15.5 sacks and 36.5 tackles for loss, meaning he spent more time in the backfield than some Idaho Vandal running backs.

7. Chris Wing (1996) - A walk-on and an Air Force airman, Wing was one of Boise State's best sackmeisters. He holds the single-season record with 20 sacks in 1996 and the record for tackles-for-loss with 33 TFLs the same year. What a season, said all the Big West teams at once before then agreeing to ship Boise State up to the WAC just as soon as possible.

6. Kimo Von Oelhoffen (1993) - Von Oelhoffen's Boise State career spanned only two seasons after the big-bodied DT joined the Broncos from Walla Wall JC by way of Hawaii. His BSU career included an all-Big Sky award in 1993, and then it was on to the NFL where Von Oelhoffen really made a name for himself. His 14-year NFL career included stops with the Bengals, Steelers, Jets, and Eagles, and he won a Super Bowl while anchoring the D-line in Pittsburgh.

5. Shea McClellin (2011) - McClellin went from small-town afterthought to prolific Boise State defensive captain to the No. 19 overall pick in the NFL Draft, a draft that he attended and got to bro hug the NFL commissioner. His draft story was a fitting end to a Bronco career that saw him earn two first-team all-conference honors and climb to sixth on the school's all-time sacks list with 20.5. 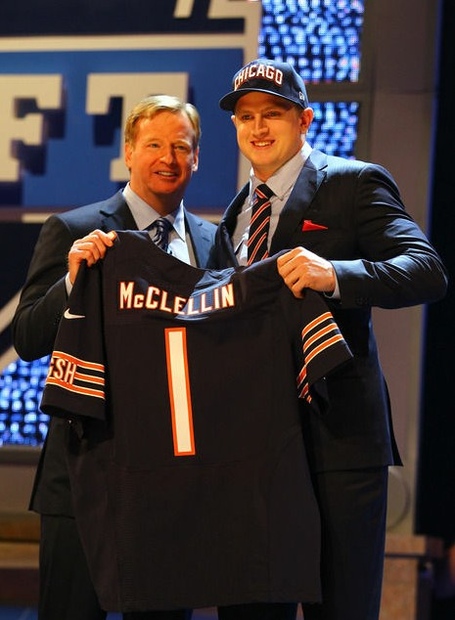 4. Pete Kwiatkowski (1987) - You know him as Boise State's wizard of a defensive coordinator, but Big Sky quarterbacks knew him as the bane of their existence. Kwiatkowski's 1987 season in particular was rough on opponents. He was a consensus first-team All-American, the Big Sky's Defensive Player of the Year, and a Bronco record maker with 15 sacks and 24 tackles for loss. In fact, Kwiatkowski holds three of the Top Ten TFL single-season marks in Bronco history with his 24 in 1987 (fifth-best all-time), 20 in 1985 (8th), and 18 in 1986 (9th). He trails only Erik Helgeson on the career TFL list.

Note: Sacks were not recorded until the 1987 season, so Kwiatkowki's single-season total of 15 is also his career total. Who knows where'd he be on the career chart if statheads had accepted the sack as a thing earlier.

3. Ryan Winterswyk (2010) - Hard to believe that Winterswyk was a walk-on and a converted safety who just so happened to become one of Boise State's all-time best defensive ends. He was first-team all-WAC three times and finished his career with 21.5 sacks, good for fifth all-time.

2. Erik Helgeson (1990) - How do none of Boise State's recent crop of defensive line studs not make the top of the all-time D-line list? Blame guys like Helgeson. He was named first-team All-American three consecutive times and holds Boise State's career records for sacks (54.5) and tackles-for-loss (68.5). The sacks mark in particular will likely never be broken since it would take a freshman Bronco D-lineman four straight years of 14 sacks each year to break it.

1. Randy Trautman (1981) - What's better than a three-time All-American? How about a College Football Hall of Famer? Trautman is the only Boise State player to receive the loftiest of lofty college football honors. His career achievements include two All-America teams, including one in 1980, the year Boise State won it all in Division I-AA. As a defensive tackle, Trautman recorded 266 career tackles, which sounds like a stupid, made-up number but is in the Boise State media guide so it must be true.