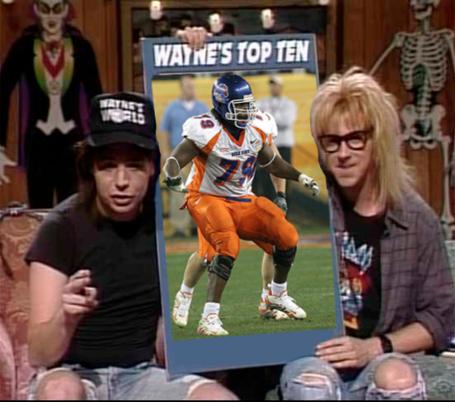 Offensive linemen are the glue that hold any good football team together. Not that too many people actually care about the glue when there is running back glitter and quarterback scratch-and-sniff stickers to look at. Still, without the O-line, Boise State's pinball offenses of years past would have been significantly less effective (see "Fresno State," any year). There have been a ton of good Bronco offensive linemen. Here are the ten best.

10. Rob Vian (2002) - The all-WAC guard was a road paver on the prolific Dinwiddie-Forsey Boise State offenses. He signed as an undrafted free agent with the Detroit Lions.

9. Thomas Byrd (2011) - Byrd started on the O-line as a freshman, with fellow freshman Kellen Moore taking snaps. His reputation as a smart, savvy leader earned him raves throughout his career and a first-team all-WAC selection his junior year. He was in and out of the lineup his senior year when his old man knees stopped cooperating.

8. Scott Huff (2002) - An all-WAC center his senior season, Huff was named to Bronco Stadium's 35th Anniversary Team back in 2005 for his contributions to three conference champion squads and for snapping the ball on an offense that led the nation in total yards and scoring in 2002. He now coaches tight ends and special teams for the Broncos.

7. Andrew Woodruff (2008) - Woodruff was a key cog on the Bronco offfensive line that chauffeured Ian Johnson to a school-record 1,700 yards rushing in 2006. He earned all-WAC first-team honors at guard following the 2008 season and then was drafted in the second round of the CFL Draft, his native football league.

6. Dennis Brady (1981) - As one of the standouts on Boise State's national championship team, Brady was the Broncos' original rock star offensive tackle before the Colledges and Cladys gained fame. Brady earned honorable mention All-America honors from the Associated Press in 1980 and 1981, and he was voted first-team All-Big Sky the same years.

5. Matt Hill (2001) - A former quarterback at Grangeville High School in Idaho, Hill made his mark at offensive tackle with the Broncos, earning all-WAC honors in 2001 and then hearing his name called in the NFL Draft that spring. A fifth-round pick of the Seahawks, Hill started two games for Seattle during his career.

4. Mark Villano (1978) - Villano was a two-time All-American at center for the Broncos, earning AP honorable mention in 1977 and AP third-team in 1978. For his trouble, the Big Sky named Villano to its silvery anniversary team.

3. Nate Potter (2011) - A local Timberline High product, Potter made good on Boise State's offensive tackle pedigree by scoring three consecutive all-conference spots (including a unanimous Mountain West pick his senior year) and All-America honors for his football-playing and his book-learning. He was the best player on an offensive line that routinely was at the top of the national rankings for fewest sacks allowed.

He is now an Arizona Cardinal and teammates with ...

2. Daryn Colledge (2005) - One of the the Golden Era's most recognizable stars, Colledge excelled during his four years as a starter at Boise State. He was a three-time all-WAC player and was named an All-American his junior season. Colledge was a second round pick of the Green Bay Packers where he started for five years, won a Super Bowl, and then signed a fat contract with the Cardinals.

1. Ryan Clady (2007) - His Boise State career only lasted three seasons (by choice, he left early for the pros), but those were three years well spent. His freshman season (2005), he earned freshman All-American honors for the WAC champion Broncos. In 2006, he earned regular All-American honors on the second-team while helping Boise State win that Fiesta Bowl against Oklahoma. And in his third and final season, he grabbed first-team All-America honors from the Sporting News, the AFCA, CBS, and Playboy. Finding WAC competition boring, he moved on to the NFL and was drafted 12th overall by the Denver Broncos where he has made Pro Bowls and has his own Fathead.