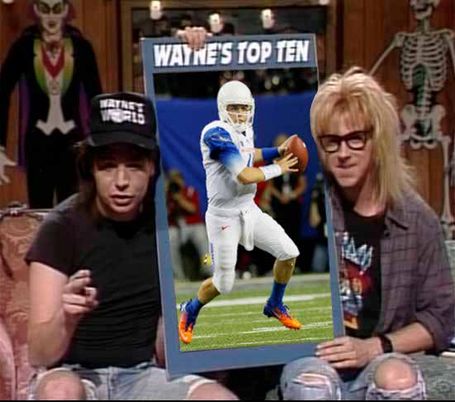 From Kellen Moore to Ryan Dinwiddie to Jim McMillan (but definitely not Kirby Moore that one time he tried to throw a pass), the lineage of Bronco throwers runs deep and wide and all over the all-conference teams of Boise State's past. Can one really rank such a lofty list of the all-time best Boise State quarterbacks?

10. Taylor Tharp (2007) - Tharp had the ignominious distinction of serving as stopgap between Fiesta Bowl winner Jared Zabransky and quarterbacking perfection Kellen Moore. Tough cookies. Nevertheless, in his one season under center, Tharp threw for 3,300 yards and 30 touchdowns, both of which still stand as Top Ten marks in Bronco history, and his 69 percent career completion percentage was Boise State's best ever, until that Kellen Moore guy showed up. Tharp was second-team all-WAC (Hawaii's Colt Brennan was first-team), and he helped lead the Broncos to the Hawaii Bowl - a game that never happened, according to Bronco Nation.

9. Mike Virden (1990) - Virden led the Broncos to the Division I-AA semifinals in the 1990 season and holds a spot in the Top Ten on Boise State's career passing yardage chart. He may be better known, however, as Boise State's interception king, setting the season mark at 20 back in 1989 and the single-game mark at six against Montana the same year.

8. Eric Guthrie (1971) - The 1971 Bronco football team, captained by Guthrie, was full of firsts - e.g., first meeting against Idaho and first win against Idaho, 42-14 in what the official Boise State yearbook calls a "throttling;" and first bowl win in the nationally-televised Camellia Bowl over Chico State. Guthrie was named MVP of the bowl game and was first-team all-Big Sky and honorable mention AP All-American that year. Notable: Guthrie also served as the team's kicker and is tied atop the Bronco record books for most punts in a game and most field goals in a game.

7. Joe Aliotti (1980) - One of Boise State's most accurate passers in school history (his completion percentage record stood for 27 years), Aliotti was a two-time All-American, earning AA first-team honors in 1979 along with the Big Sky Offensive Player of the Year trophy and AA honorable mention honors in 1980, the year that ... oh, right, Boise State won the national championship. Aliotti threw for 358 yards in the championship game against Eastern Kentucky. His one shining moment came on a 4th-and-20 touchdown pass with 20 seconds left and the Broncos trailing the Eastern Kentuckans by five. Too bad YouTube didn't exist back then.

6. Jared Zabransky (2006) - Zabransky's claim to fame is his role on the 2006 Fiesta Bowl Broncos, which is commonly regarded as one of Boise State's all-time best teams. Zabransky was Offensive MVP of the Fiesta Bowl where he threw for three touchdowns (two-and-a-half, if you're being particular about the hook-and-ladder). His career was marked with incredible highs - two undefeated seasons - and frustrating lows - the Georgia game Part One and the Human Bowl against Boston College. When he was good, Zabransky ("Z" to his friends and himself) was one of Boise State's all-time best. When he was bad, well, I don't want to talk about. Quick, change the subject. Hey, video game cover. 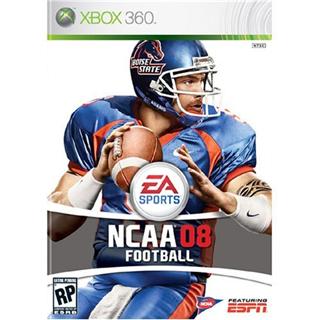 5. Tony Hilde (1996) - Hilde's most prolific season came in 1994 when, as a sophomore, he helped lead the Broncos on a magic carpet ride all the way to the Division I-AA national championship game. Along the way, the Broncos beat the No. 1-, 2-, and 3-ranked teams, just a year after going 3-8. Hilde's 1994 season included nearly 3,000 yards and 26 touchdowns. For his career, Hilde held the record for total offense (B.K., before Kellen), and he is Boise State's most prolific rushing quarterback with over 1,000 career yards and 19 rushing touchdowns (Kellen won't touch that one).

Many consider Hilde to be the father Abraham of Boise State's remarkable run of quarterbacks.

4. Jim McMillan (1974) - McMillan is the only Boise State player to have his number retired by the school. 'Nuff said, but here's some more stuff anyway. McMillan was a unanimous first-team All-American in 1974, picked by the AP, United Press, and Kodak (yes, that Kodak) in addition to being the Big Sky's Offensive Player of the Year. For his dominance over Big Sky competition, McMillan was named to the conference's silver anniversary team.

3. Bart Hendricks (2000) - Hendricks helped usher in Boise State's Golden Era of Division-I domination by dominating the Big West award shows in his final two seasons. He was the conference's Offensive Player of the Year both seasons, and he led Boise State to its first two Division-I bowl wins - an upset over Louisville in 1999 and a win over UTEP the following year, sealed with a 77-yard touchdown scamper. His career is immortalized in the Bronco record books where his yards and touchdown passes are just stupid good for a guy who played football before passing yards and touchdowns were cool. Before the final two guys on this list, Hendricks was the far-and-away most legendary of Bronco quarterbacks.

2. Ryan Dinwiddie (2003) - Immediately following Hendricks' reign of awesome, Dinwiddie stepped in and managed to outdo just about everything Hendricks had done. By the time he was finished at Boise State, Dinwiddie was the NCAA's highest rated passer ever (later to be topped by Tim Tebow), the Broncos' all-time leader in yards and touchdowns and everything else that you judge quarterbacks by, and the ringleader on back-to-back, one-loss bowl champions. For his efforts, the WAC gave him its Offensive Player of the Year award in 2003 and first-team all-conference honors in '03 and '02.

1. Kellen Moore (2011) - Considering that he may be one of college football's greatest quarterbacks ever, Moore certainly deserves the title of best Boise State quarterback of all-time. I won't bore you with the details in any format other than fragmented sentences. Wins. Conference MVPs. All-American teams. Heisman invite. Yards. Touchdowns. Object of Joe Tessitore affection. Finger guns.