Share All sharing options for: The mock draft of Boise State football things

Tis the season for mock drafts, and instead of trying my hand at one in which the first 15 picks invariably end up being Boise State alums and Brian Reader to the Bills, I thought I'd go in a different direction, albeit a direction that still involves a whole lot of Boise State.

Drew, Nick, and I bunkered down in our respective war rooms to bang out a mock draft of Boise State football things. The rules were simple: Draft a Boise State person, place, thing, or idea when it's your turn. We did this 32 times. Check out the results, and feel free to add Nos. 33 and beyond in the comments.

Kevan: You can't go wrong with the patriarch of Boise State football. He's the left tackle of No. 1 overall picks. Sexy? No, because he's old. Effective? You bet, because he's the greatest coach in Boise State history.

Drew: C'mon...I'm not going to pass on the 2nd greatest coach (for now) in school history now that Lyle Smith is off the board. You know what to do, Nick...pick Tony Knap.

Nick: Sorry, maybe my memory doesn't go back quite as far or I'm not quite as nostalgic. Or maybe I'm just picking our next great coach...

Kevan: The signature "Where were you when ..." moment in Boise State sports. (Chris Myers' answer: In a sousaphone, lurking.) 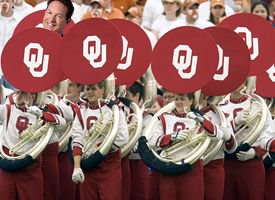 Nick: I can't believe the Blue Turf is still on the board

Kevan: Boise State has won 12 straight over Idaho in such dominating fashion that Nos. 13 and up are givens at this point. Can't wait for 2030 when cash-strapped Idaho athletic director Robb Akey makes a desperate move to schedule a game with the Broncos in the new 45,000-seat downtown Bronco Stadium atop the IKEA, and Boise State agrees because, hey, they need an NAIA cupcake on the schedule that year.

Drew: Doug Martin is a better all-around back and more likely to run through a plate-glass window if an endzone was on the other side, but I don't think we can discount what Johnson's production or personality did for the program during his tenure here. He was the feel-good story when Boise State was still the feel-good team. I still feel good about them, mind you, but the lovable underdog tag has since been replaced with the schoolyard bully whose body of work is questioned constantly by principal Craig James.

Nick: Yes, I'm talking about the bucking bronco over the state of Idaho. Classic, and Boise State should still be selling merchandise with this logo.

Kevan: I thought about trading up for this pick.

Drew: I think a new era of linebacker excellence is close at hand, but in my book, Korey Hall is the gold standard.

Nick: I wasn't born yet, but I hear it was a good time. Plus that team had Cedric Minter!

Drew: Only the Raiders take a kicker in the first round, but I just thought I'd remind everyone about placekicker clutchness. It exists.

Nick: Great special teams tradition, and no, Fresno, you weren't the first.

Kevan: I know most people may be partial to Statue Left, but for my money, Circus was the play of the game for Boise State in the 2007 Fiesta Bowl. Consider this pick my Bud Adams moment (for the time when Titans owner Bud Adams demanded that his team draft Vince Young despite reservations from his draft people who thought Statue Left - i.e., not Vince Young - would be a better pick).

Drew: Boise State didn't invent this defense, and they don't use it exclusively ... but switching this to the "base defense" in 2008 was a stroke of genius by Justin Wilcox and made the nickel a star.

Nick: I'm putting these two together because they both involve Doug Martin and Idaho. The first is only rumor and no video evidence exists, while the second will live in YouTube infamy forever.

Kevan: He helped put Boise State quarterbacks on the map and started the trend of everyone expecting the world out of the guy under center, including but not limited to Joe Southwick. Sorry, Joe Southwick.

Drew: Someday people will wonder why number 12 is retired and not number 11. I wonder the same thing right now. Jim McMillan must've been quite a guy.

Nick: He was the first coach I remember, and he was very memorable.

Kevan: ESPN has given us so much - a national audience to showcase Boise State football, unfathomable amounts of publicity, a College Gameday appearance, the fantasy football teams of Rod Gilmore and Joe Tessitore. It's almost enough to forgive them for spawning Mark May and Craig James.

Drew: Clady recorded a number of "firsts" for the Broncos. First first-round draft pick...first player to leave early for the NFL...first Boise State alum to play in the Pro Bowl...first O-lineman to weigh more than a compact car. Clady should be considered Boise State's standard-bearer at offensive tackle and thus gets my pick at No. 23.

Nick: He paved the way.

Kevan: I can't believe this game fell to pick No. 25. It is the proverbial Randy Moss-to-the-Vikings of draft slides, which I guess makes me the Vikings and also makes me teams like the Bengals and Saints who took Takeo Spikeses and Kyle Turleys earlier. Also, I am not insinuating that the 2001 Boise State - Fresno State game had a drug rap, except for the drug that makes you dream Dinwiddie-Swillie dreams in early-00s retro ESPN graphics 11 years after the fact. Besides, I'm not even sure that drug is illegal, nor should it be.

Drew: Some don't know that the Broncos had their own Four Horsemen, only Grantland Rice didn't write about these guys. In the late 70s and culminating in the Broncos' 1-AA national championship in 1980, Cedric Minter, Terry Zahner, David Hughes, and Joe Aliotti cut quite a swath of destruction across the college football landscape-albeit at the FCS level. Hard to believe that to date, Minter's career rushing mark hasn't been equaled at Boise State and no other Bronco running back has had as much success in the NFL as David Hughes (we're counting on you, Muscle Hamster).

Nick: This was the turning point in the second Fiesta Bowl and should have been the moment that Kyle Brotzman was remembered for. Credit also goes to Jason Robinson for being the guy to see the opportunity.

Kevan has traded pick No. 28 to former KTVB sports anchor David Augusto in exchange for a DVD copy of Mark Johnson's blooper reel, $500 in Wendy's coupons and IOUs, and the No. 4 pick in Augusto's five-feet-and-under celebrity mock draft (which I shall use on Kiefer Sutherland).

David Augusto: Hawk was the greatest coach in Boise State history, a master motivator, and one of the most inspiring best friends I ever tailed to and from work on the weekends. They don't make them like him anymore, at least not with the hair samples I shipped off to that Soviet lab.

Drew: I can't believe you took Kiefer Sutherland, Kevan. I thought we had a gentleman's agreement!

I'm taking Dirk Koetter because, frankly, I think he was the one that ushered in the Tom Scott-called "golden era" of Bronco football. Koetter's 26-10 record as Bronco head coach would probably be unacceptable by today's standards, oddly enough...but he led the Broncos to their first ever FBS bowl wins and challenged the team, and the fans, to do better. They have and we have.

Nick: This was Kellen Moore's coming out party. It was a huge game on the road in Autzen where nobody wins, except for Kellen Moore.

Drew: Yes, I'm pandering with this one...but I really think that the way Boise State fans have stepped up their game in the last few years has aided the program's meteoric rise. We've had The Blue for quite a while, but the confines of Bronco Stadium weren't always hostile territory for opponents. Now, Bronco Stadium is considered one of the best home field advantages in all of sports, and we're starting to get superfans coming out of the woodwork. Y'know ... Bronco Pimp, The Blue Elvi, The Muscle Hamster (actually a Peruvian Guinea Pig), Bronco Libre, and the Bronco StormTroopers. Chris Petersen might've been the first to bring the "nation" moniker to Boise, but the fans have eagerly embraced it and painted this town blue and orange twice over - to the consternation of the few Idaho fans still living here.

This concludes the first round of the mock draft of Boise State things.