ed's note: This post has been percolating in the FanPosts all week, and I finally decided it was too good not to share with you all. Enjoy some light-hearted speculatin'.

Let's be honest, QB races are so last Saturday. RB depth is not as big an issue as people want to make it...unless too much depth is a problem. Defensive Line questions are rhetorical and debate over blocking tight ends vs pass-catching tight ends simply needs to wait until fall. 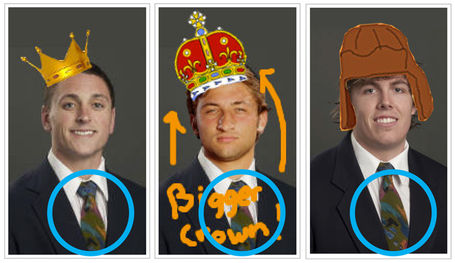 After seeing Kevan's post / artwork of Southwick and Patti side by side, it was clear that though Southwick may have had crown-envy, neither QB would envy the other's tie. I know that the "rocking the same tie in the roster photo" has been going on for quite some time, and seeing that particular piece of neckwear got me all weepy nostalgic for a certain mop-haired southpaw. So nostalgic, in fact, I devoted myself to a wildly wasteful 12 minutes of investigative journalism.

What I found will neither shock nor surprise you, but I do hope it sheds some light on why BSU's program has been so successful over the last decade: Solidarity. The age-old adage, "the team that accessorizes together will win BCS bowls together" has never held more true.

1. The tie that Patti, Southwick and Kellen sported seems to have made its debut in 2007...Kellen's freshman campaign. Could it have come from Prosser? Will that tie end up in the college football hall of fame?

2. Dan Paul's standalone effort is a 2006 holdover that appeared on fellow fullback Michael Lose. The tie may very well have appeared in BSU roster photos prior to the 2006 season, but my resources and desire to to find out waned exponentially after 12 minutes.

3. I did a quick run through this season's roster (so far...loads of incoming player pics missing) and made the following chart which shows the tie and the number of times it is pictured. Though tied (if you will) to greatness, Kellen's "Cosby" tie is not my favorite. The tie made of what may very well be vintage sleeping bag lining is, however, and it is amazing. 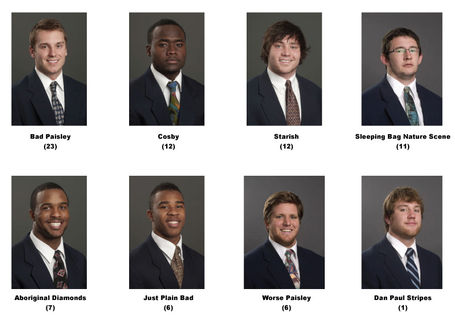 Every tie has a story, and I'd like one of the OBNUG journalists to do an exposé piece this summer detailing the origins of each tie, when a tie is retired and if there is any significance associated with particular patterns. The Nation wants to know. The Nation deserves to know. Sadly, The Nation has nothing better to do until August. Ugh.