Share All sharing options for: Four reasons to be hopeful about Boise State's chances in the Mountain West tournament 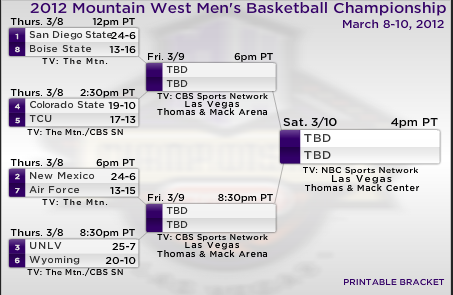 Thursday on the networks of the Mountain West that so few of us actually get, the road to the Final Four begins for the eight MWC teams - a road that no BCS computer or blowhard troll with Senate aspirations can dictate. Every team, even the No. 8 seed Boise State Broncos, has a chance at a Cinderella March and a college basketball national championship. Novel idea, eh?

Boise State's road, which is slightly more uphill than the other seven MWCers and accessible only on off-road Segway, begins against No. 1 seed San Diego State in the tourney opener on Thursday afternoon (1:00 p.m. MT, The Mtn.). But take heart! Boise State has a chance. Here are five reasons why:

1. Leon Rice has a winning record in postseason play. Rice went 3-2 last season with the Broncos in the WAC tournament and the College Basketball Invitational thing-a-ma-jig. He is obviously some sort of postseason wizard Lombardi.

3. The Broncos might be due to pull an upset. In addition to nearly beating the Aztecs in Aztec land, Boise State took ranked UNLV to overtime. Of their games against the top three teams in the conference, Boise State very nearly won one-third of them.

4. Australian freshman X factor. When Anthony Drmic and his band of young'uns is on its game, the Broncos can be a pesky team. Pesky = dangerous, in my book.

And I'll leave you with one reason not to be terribly hopeful about Boise State going on a MWC tourney run: San Diego State is the No. 23 team in the country. Boise State is No. 156.

How do you think Boise State will do in the conference tournament? Do you have high hopes? Share your thoughts in the comments.