With Boise State football in the throes of spring practice and Kellen Moore and friends on the cusp of NFL riches, the Internet is rife with burning questions about the Broncos and college football and Dreamcasts. Wait, really Dreamcasts? Man, these Yahoo Answers people are a curious bunch. I'll see what I can do.

The following are actual questions submitted by actual persons. Click a question to enlarge it. Submit your own question at Yahoo Answers.

That is an excellent question. Let's consult the Big East's map of the United States. 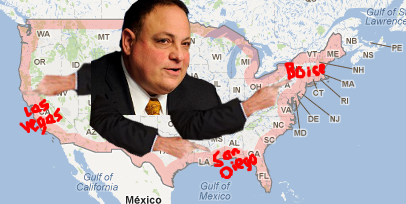 Any time you lose college football's all-time winningest quarterback, college football's all-time muscle-per-capita running back, an entire defensive line plus one, and half of your coaching staff, expectations are going to change. This is not the Boise State football team that returned 20 of 22 starters and landed on Sports Illustrated covers. This is a team that Andrea Adelson will pick to lose four games, Mark Johnson will mistake for stranger danger, and Lee Corso will forget exists. It's nice to know the Broncos bring back talent, yet it hurts to see other, favorite talent moving on.

But to answer your question, people are dumb. Don't they know that their doubts are the Duralog of Boise State football's eternal disrespect flame?

I think you are mistaking Boise, Ohio, for the campus of Bob Jones University.

I know, right? It's not like you're in the ghetto. Unless you are in certain parts of Garden City. Then you might actually be in a ghetto, and I would drive pretty fast if I were you.

This seems like an absolutely insane idea. So yes, we should totally do this.

I would absolutely want Kellen Moore on my team - my team being the 2012 Boise State Broncos.

Nice bowl picks. Allow me to provide some commentary.

Are you Nick Patti? Please tell me you're not Nick Patti.

Replacing Kellen Moore won't be easy, but the Broncos will be fine. Do you remember life before Kellen Moore? I do. There were bowl wins and record breakers and 10-win seasons and Taylor Tharp. OK, scratch that last one. I mean, Jared Zabransky. Doh! Er, how about Ryan Dinwiddie? Yes, there was Ryan Dinwiddie. Boise State will be fine.

On a related note, Kellen Moore is indeed as good a pro prospect as Peyton Manning except for the minor areas of size, pedigree, unanimously positive scouting reports, and a team wanting to draft him No. 1 overall.

Dreamcasts are rare collectibles, like the Gamecube except worth more money and in higher demand. But let's see the Dreamcast play Mario Tennis! That's what I thought.

I've got to be honest. I thought you were going in a different direction with this question.

You would probably not be a monster receiver in the NFL. Monster NFL receivers have about 10 inches on you, bench press more than two of you, and can run about three 40-yard dashes in the time it takes you to run one.

But don't lose hope! There may be a career in football for you yet.

Best of luck to you!