Who is Boise State's next great NFL prospect?

Share All sharing options for: Who is Boise State's next great NFL prospect?

Last year's Boise State seniors take to the practice field today to run and jump and stretch and three-cone in front of scores of ogling NFL scouts. There is nothing quite like Pro Day, except for meat markets and car show auctions.

I'll have a recap of Boise State's Pro Day later this afternoon, but until then, I thought it might be fun to see what type of NFL prospects the next wave of Boise State players will make. Here is a list of the top guys as NFL Draft Scout dot com sees it: 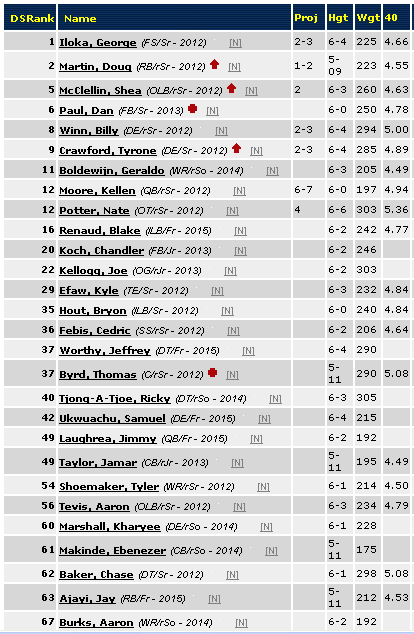 From the looks of things and from the inerrant conclusions drawn by Google searches, Dan Paul is Boise State's next great NFL prospect. Only problem is that he plays fullbacks, and fullbacks don't so much exist in the NFL any more.

You'll remember that last year Nate Potter was Boise State's can't-miss prospect - a first rounder depending on what helmet-haired analyst you asked. He is now a fourth rounder and far from the most talked about Bronco player in the draft.

Could a similar fate befall Paul? No doubt NFL scouts will love his measurables and SUV-like qualities, but when it comes to the Bronco with the best draft chances in 2013, a fullback / H-back / tight end hybrid is an odd choice. Here is a list of other Bronco seniors-to-be who might see their stock rise over the next 12 months:

If next year's NFL talent is a little lacking, the Broncos figure to more than make up for it with prospects in 2014 and 2015. Geraldo Boldewijn has scouts talking because the Dutchman has sexy, sexy potential. Same thing goes for 2015 draft class candidate Blake Renaud. And then there's this: On CBS Sports's list of the top 100 prospects for 2014, Joe Southwick sits at No. 70.

Who do you think will be the first Bronco drafted from the 2012 senior class? Which current Bronco has the best NFL prospects? Share your thoughts in the comments.