Share All sharing options for: The tournament bracket of Boise State media people

Tomorrow's NCAA tournament and my loads of free time got me to thinking: What would a tournament bracket look like if it were filled with members of the Boise State media universe? 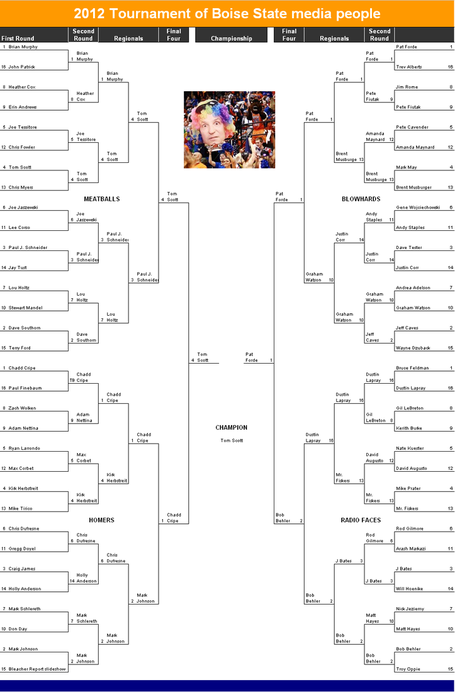 (Click to enlarge or to print out and second guess my picks in the Homer Region.)

The tournament bracket of Boise State media people contains anyone and everyone even loosely associated with journalism and Boise State. From Idaho Statesman lifers to ESPN bloviaters to former Vandals turned soap opera actors, the bracket is a battle royale of Boise State media royalty. And the winner is ...

Tom Scott! Mr. Slant survived the Meatball Region, pulling upsets over Brian Murphy, Paul J. Schneider, and Chadd Cripe to make his way to the final where he slay the mighty Pat Forde in the championship.

Other highlights of the made-up tourney included

Check the full version of the bracket for all the other details and matchups, and share your favorite in the comments.

And now seems like as good a time as any to mention that OBNUG's Tourney Pick 'Em contest is still taking entries. Sign up at the Yahoo website. OBNUG's group ID # is 97191, or you can just search "OBNUG."

Winning bracket gets cash to spend at the Bronco Shop ... on a dad polo, most likely. I know you all too well.

Yahoo! Tourney Pick'em supports SBNation and the best college sports tournament of the year. Join the bracket pools of Drew Brees, Michael Phelps, and Lil Wayne-- all while competing in the $5 million Perfect Bracket and $10,000 Best Bracket Sweepstakes. Be part of the best and biggest Yahoo! Sports tourney game yet – sign up today!