Learn which players were voted Most Valuable by their own teammates. Plus, check out Washington's QB. Anyone on the Huskies' squad can have an impact, but these four in particular should be on Boise's radar.

Share All sharing options for: Washington Players to Watch

In the PAC-12, everyone is good. Well, except for Washington State. Err... like I said, in the PAC-12, partity rules and everyone is good for at least one game. Like any other BCS team, Washington is stacked with talent. After struggling through a brutal mid-season lineup (Oregon, USC, Arizona), the Huskies recovered to play up to their ability and reeled off 4 consecutive wins. Then, there was the Apple Cup Incident of 2012. However, anyone who knows rivalries knows the best team doesn't always win. Yes, I said that, Washington State. Much like the NFL, the difference between a top-tier team in the PAC-12 and a mid-tier team is often just a few bounces of the ball. So don't be fooled by the Huskies' record. This is an excellent BCS team, headed in the right direction. Head Coach Steve Sarkisian will have Washington fired up and ready to go on Bowl Day. Our Broncos will have to stay focused, play smart football, and treat every down as if it were their last if they want to have a chance of bringing home the trophy this year. On with the profiles. On offense, the Huskies have some gems who will be ready for NFL prime time once graduation day comes. 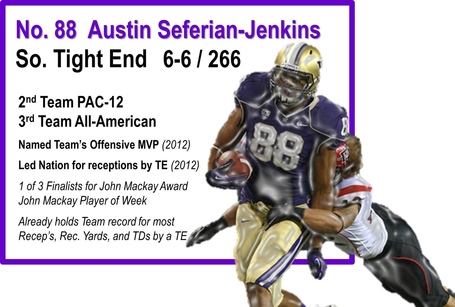 Not profiled with his own photo, but an amazing talent nonetheless, RB Bishop Sankey (3rd Team PAC-12) has the ability to wreak havoc on our defense. Also not profiled with his own photo, WR Kasen Williams (2nd Team PAC-12) will test our secondary like few have. If QB Keith Price is on, expect our Broncos to have a long day. Coach K will have his hands full dealing with the Huskies' balanced attack. With one of the nation's best Tight Ends, a premier Wide Receiver, and a top-end Running Back, Mr. Price has any number of options with which to move the ball. It will be up to our Boys in Blue to figure out where they're going and stop 'em before they get too far. 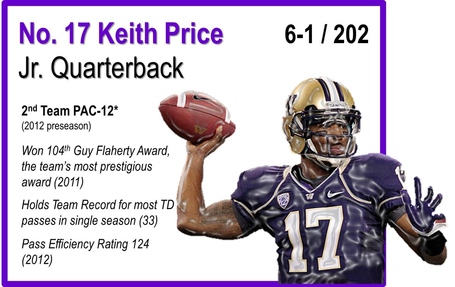 On defense, Washington has two great players in the secondary, and one amazing defensive box. Although not profiled with a picture, pay close attention to the trenches when we are on offense. Five of Washington's defensive linemen and linebackers made honorable mention PAC-12 this year. That's nearly their entire unit. It will be an enormous challenge for DJ and Jay to navigate through these beasts. 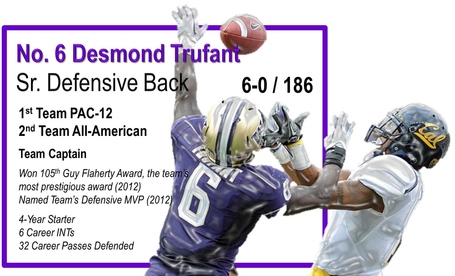 While Desmond is ready for Prime Time, the Huskies have some serious talent backing him up at Safety. His teammates thought enough of him to vote him Special Teams MVP, so watch out when we're running 'em back. 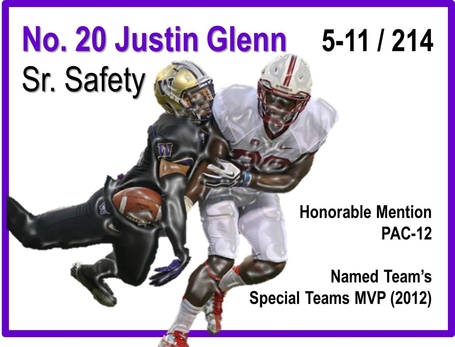