Three stars and one goat of Boise State's win over Hawai'i

Naming Three Stars is a hockey tradition that over the past few years has become a Bronco tradition. More info here if you are interested.

Share All sharing options for: Three stars and one goat of Boise State's win over Hawai'i

The Boise State Broncos cruised to an impressive victory on the island against the Hawai'i Warriors Saturday night. A stout defensive effort, solid passing, and big efforts from a few new names helped the Broncos improve to 8-2 on the season.

Joe was uncharacteristically above average on Saturday night. Okay, that's maybe a bit hard. Joe played quite well against the Hawai'i Warriors. He didn't even have an interception! He was a few dropped passes away from having even better numbers than what he ended with. He looked as calm and poised as he has looked all season. Of course playing a 1-7 Hawai'i team would do that for just about anyone. Joe ended the night as follows:

Not too shabby, eh? I especially like the part where he threw lots of complete passes to our team, and not Hawai'i. Joe's abilities have been endlessly argued by fan and foe alike, but it sure seemed like he had most of the answers on Saturday.

Congratulations, Joe, on being Star No. 3 of Boise State's win over Hawai'i.

At 6'3" tall and 200 lbs, Aaron Burks would be a great target for any quarterback. Throw in the fact that he is lightning quick, and this kid is even more impressive. Burks follows in the footsteps of the great receivers before him, and Saturday night was no different. With his best game of the season, Aaron Burks is no doubt deserving of his Star No. 2 accolade. His numbers for the night are below:

His most impressive catch of the night came from a bomb by Joe Southwick down the left sideline. He caught the ball in stride and galloped in for the easy score. His hands were equally impressive on the night, securing several wobbly passes. Of course had he dropped them we would be talking about how bad his hands were at handling wobbly passes. Regardless, he got the job done, and was instrumental in the Broncos trouncing of the Warriors.

Congratulation, Aaron, on being Star No. 2 of Boise State's win over Hawai'i

I had been planning all night and this morning on going with Sam Ukwuachu on Star No. 1. He was arguably the most impressive defender on the night, rushing the Hawai'i quarterbacks on countless occassions. Ukwuachu playing opposite Demarcus Lawrence is an absolutely beautiful thing.

However, when I started analyzing the complete defensive numbers, I couldn't simply give the star to one person. Especially after seeing that True Freshman Donte Deayon, who's red shirt was burned last night, led the team in tackles, and also had an interception. Check out the full defensive numbers below. 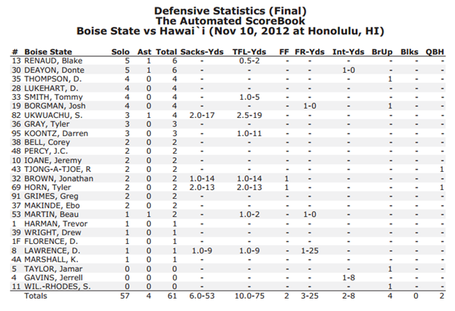 I couldn't possibly give the award to just one person. Everyone played lights out. Had special teams not dropped the ball (again), this game could have easily been a shutout.

Congratulations to every defender on this squad, for continuing to play great and earning Star No. 1 of Boise State's win over Hawai'i.

Sorry, guys. Two weeks in a row is just plain unacceptable. And I thought you didn't enjoy running stairs at Bronco Stadium? Special teams has long been a staple of the Boise State Broncos uber successful program. One would not know that based on the last two weeks. The Broncos let another opponent score on a kickoff, allowing him to run 100 yards without being tackled. That is 300 feet without being tackled. And even more disgusting: that is 3,600 inches without being tackled! Yuck.

Had it not been for a few shoelace tackles, it's possible that Hawai'i could have taken one or two more to the house. The coverage was simply atrocious. The only highlight to special teams play was getting to see Blake Renaud take a few people's heads off. Guy is an animal. There better be some changes quick, or it's going to be a lot worse than running stairs.

Who were your stars, and who was your goat? Did I get my stars right? Too hard on the special teams? Sound off in the comments, Bronco Nation!