Most of Boise State's 2013 verbal commits were in action this weekend as they approach the mid-way point of their senior seasons.

Join me after the jump to see updated team records and individual statistics for the class of 2013.

It was another good outing for Finley and another win for Paradise Valley on Friday evening as they defeated Arcadia 38-23 and moved to 5-2 on the year. Finley tossed 3 TDs and accounted for 229 yards through the air and also rushed for 81 yards and a TD in the victory. Finley now has 2,072 yards and 23 TDs (22 passing) on the year with just 6 INTs

Fruitland destroyed Homedale on Friday night 44-0 and are now 7-0 on the year. Martarano threw for 173 yards in the win on just 4 completions. Fruitland will play Weiser this Friday.

Chino Hills lost to Charter Oak 41-13 on Friday night and now sit at 3-2-1 on the season. Stats were not yet recorded for the game. Chino Hills will try to get back on track this Friday against Ayala. 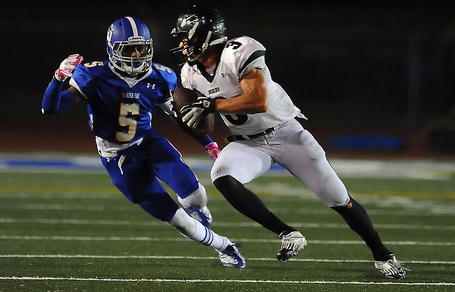 Eastlake moved back into the win column on Friday night and to 4-2 on the year after defeating Chula Vista 49-21. Baltazar had 190 yards rushing on just 17 carries in the win, and scored a 6-yard TD in the contest as well. Full season stats on Baltazar are missing because last week's game stats have not been logged.—leaving that game out, Baltazar would have 790 yards rushing and 9 TDs on the season...but clearly those totals will creep higher, when the St. Augustine stats are unearthed.

Nevada Union had a disappointing showing against Rocklin following their bye week and dropped the contest 31-9 to move to 3-3 on the year. Again, Vallejo was a bright spot for the Miners despite the loss and finished the game with 12 tackles, a PBU and a safety. Tanner has 73 tackles on the season with 1 sack, 3 hurries, 1 forced fumble, 2 fumble recoveries, and a pass breakup. Offensively, he has 243 rushing yards and 3 TDs.

Bingham notched a 33-0 shutout over American Fork on Friday night and moved to 6-2 on the year. The Miles-led defense surrendered just 98 total yards in the game and recorded six sacks—how many were attributed to Miles is anyone's guess as individual game stats were not provided. Prior to Friday's contest, Miles had 37 tackles and 5 sacks on the season, as well as 2 PBUs and an INT.

West suffered their first loss of the season on Friday night—losing a wild one to Mira Costa 62-42—and now sit at 5-1 on the year. Boesen had 5 catches for 71 yards in the loss as well as 16 tackles (1 TFL). On the year, Boesen has 53 tackles, 8 sacks, and 11 tackles-for-loss as well as 25 receptions for 393 yards and 3 TDs. West will take on Redondo Union this Friday night.

Taimatuia's Greyhounds dropped to 2-4 on the season after losing to Independence yesterday 54-17. The game stats are not yet recorded for yesterday's contest, but I've compiled the stats from the previous 5 games and it looks like heading into Saturday's contest, Taimatuia had 23 tackles (6.5 for loss) and 1 fumble recovery.

East Central had a bye week. They are 3-2 on the year.

Rocky Mountain remains unbeaten (6-0) after defeating Mountain View 20-6 on Friday night. The Grizzlies will play Eagle next week in a game that will likely decide the 5A SIC title.

That's it for this week...but hopefully we'll be adding to our list of recruits as the season wears on. If you have any stats, info, or otherwise to report, I would greatly appreciate it. Just send HERE.