Coming off a 12-2 season, Southern Miss knows how to ball. With talented players on both sides of the ball --- and particularly on special teams --- Southern Miss has the talent to take down our Broncos. Four of their top athletes are profiled below.

Southern Miss is much better than their record indicates. This is a team that finished the 2011 campaign with a Conference Championship, a Bowl victory, and a 12-2 record. At 0-4, most of their goals for the 2012 season are long gone. At 0-4, their primary motivator is pride. Nothing could redeem their season more than a win over a perennially ranked, BCS-busting team, a model for all non-AQ's: Boise State. And guess who's coming to town on Saturday?

Southern Miss came within a cat's whisker of defeating No. 16 Louisville last week. QB Tracy Lampley, making his first start, saw the silver lining in the loss, "I saw us come together as a team (Saturday night). I feel this game truly showed us what we are capable of, no matter what the conditions are, who the other team is. We came together as a team, and that’s one of the biggest things that we could ask for." Teamwork and comraderie go a long way, especially when it applies to emotionally charged young men.

Southern Miss is like a cornered animal right now: fearless, focused and fighting for its life. Saturday's Southern Miss matchup has trap game written all over it. If Boise State is to win, it must respect its opponent for the talent that lies beneath and play with its own sense of purpose and urgency. Southern Miss is putting the pieces together and still has the chance to save its season. Beating Boise State would be the perfect start.

Senior Special Teams specialist Tracy Lampley is one of the players our Boys in Blue must contain if we are to leave Hattiesburg with a victory. Mr. Lampley is Southern Miss' best player. A gifted athlete, he plays kick returner, punt returner, wide receiver, and running back. Beware Boise State defense! Tracy has the ability to change the course of the game with just one touch. And he gets many.

Tracy's numbers for 2012 are suspect, however. The student newspaper mentions a minor injury early in the 2012 season, but no details were provided. If Mr. Lampley fails to light up the playing field, this lingering injury could be why. 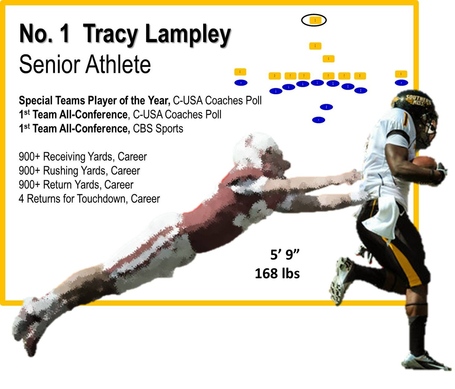 Protecting Redshirt Freshman QB Ricky Lloyd are senior Offensive Linemen multi-year starters Austin Quattrochi, Darius Barnes, and Jason Weaver. Leading them is senior Left Guard Joe Duhon, a talented big man with plenty of experience. Keep an eye on how well he and his teammates open holes for Southern Miss' running game. Boise State's defensive line cannot allow themselves to be bowled over by Mr. Duhon's line. If they do, it could be a long afternoon for Coach K and his men. 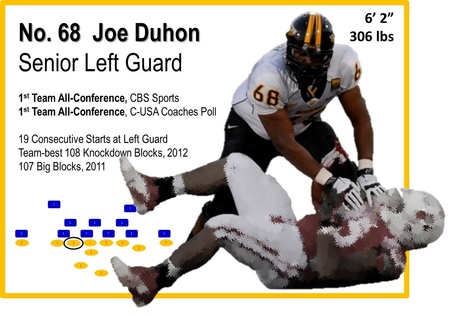 On the defensive side of the ball, senior Jamie Collins keeps opposing offenses in check. Playing my new favorite position - the "Bandit" - Jamie has tremendous freedom to go where he wants while playing. A hybrid Defensive End / Outside Linebacker position, the "Bandit" is every linebacker's dream position. Hopefully Coach Prince's offensive schemes keep Jamie from causing too much havoc. No matter the schemes, it will all come down to execution by our Boys in Blue. 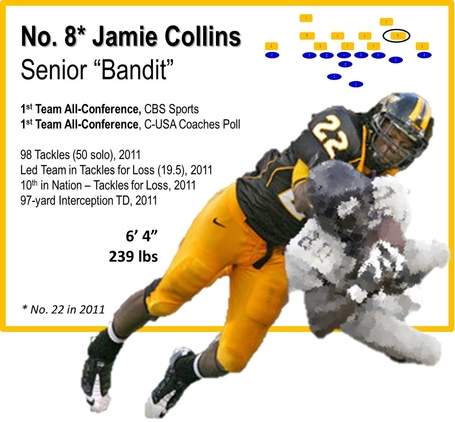 Joining Jamie on the defensive front is Junior Khyri Thornton. A four-star recruit, Khyri had lots of potential out of high school. However, his low academic scores kept him from joining the big leagues. Undeterred, Khyri took a year to study at a prep school. With acceptable test scores, Mr. Thornton was ready to join USF on a football scholarship. At the last minute, USF recinded its offer. Sensing an opportunity, Southern Miss offered right away, and Khyri gladly accepted. It has been a great match ever since. Not only are NFL scouts interested in him, but Khyri made the honor roll last semester. No matter what Khyri does on the field, he should be most proud of what he has accomplished in the classroom. 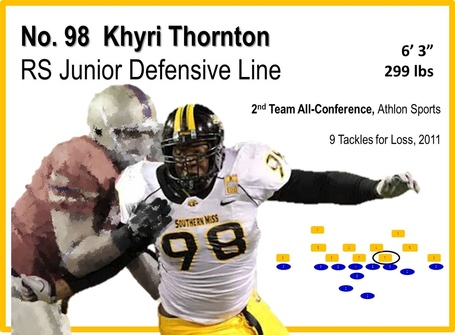 As always, here's hoping for a well-played game by both teams, no serious injuries, a fun time had by all players, and of course - a Bronco Win!