"Tis best to weigh the enemy more mighty than he seems." —William Shakespeare

The 3-1 Broncos will take on the 0-4 Southern Miss Golden Eagles this Saturday and how this one will end is anyone's guess. If this game was played any time in the last 4 years, I would've said the reeling squad had no chance...but Saturday's Bronco outing showed us that we're in for an "interesting" year to say the least. You've probably already done the chalk talk by now...so might as well just get to know some random facts and figures about Southern Miss and their very Southern past.

Join me after the jump and we'll get to know our enemy...

10) Hattiesburg, Mississippi—the home of the University of Southern Mississippi—was founded in 1882 by pioneer lumberman and civil war captain William H. Macy Hardy. Positioned at the fork of the Leaf and Bouie rivers, the town site was originally called Twin Forks, and then Gordonville for a time...but Hardy decided that, in lieu of flowers, he'd just name the town after his second wife, Hattie. Hardy later went on to found (or maybe just name) the towns of Gulfport, MS and Laurel, MS. Yes, you read that right—a guy named Hardy founded the town of Laurel. Mel Brooks couldn't have written that better.

9) Southern Miss was founded as Mississippi Normal College in 1910 ("Normal" being the distinction given to schools that trained teachers). The school kept this moniker until 1924 when it became the State Teachers College—then again changed to Mississippi Southern College in 1940. 22 years later, university status was finally granted to the school and its fourth name change is the one we see today—University of Southern Mississippi. In case you were wondering, there were also "Abnormal" schools, but those were to train carnival workers.

8) Southern Miss has gone through more mascots over the years as the university has names. The first athletic teams competed as "The Tigers", but soon switched to "The Normalites' as a none-too-subtle hat tip to the school's reputation as a teacher factory (by the way...3 things to watch out for in caves: stalactites, stalagmites, and normalites). In 1924, the teams became "The Yellow Jackets" for a spell, until the school was renamed Mississippi Southern—at which point the student body voted to rename the team "The Confederates" /wince. "The Confederates" lasted but a year before it was changed to "The Southerners", but it's doubtful that the change was made to promote more sensitivity...the Southerner's mascot was "General Nat", named after General Nathan Bedford Forrest—a confederate general that later became the first Grand Wizard of the KKK. In 1972, the general finally ran his course and all athletic teams were renamed "The Golden Eagles". The current eagle mascot's name is Seymour, but his full name is "Seymour d'Campus" (this is not a joke)—who of course was preceded by Seymour d'Freshmanquadresidencehalls (that was a joke). 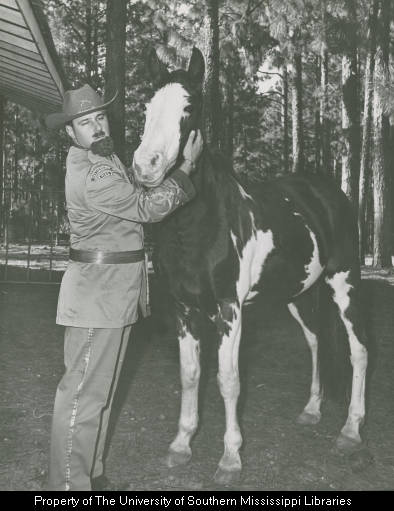 "General Nat" with "Son of Dixie". Doesn't get any more "Southern" than that.

7) Southern Miss played their first year of organized football just two years after the school's founding, in 1912. The Tigers(?) went 2-1 under coach Ronald Slay—outscoring a murderer's row of military academies and Boy Scout Troops (really) 36-6. Unfortunately, the manly-named Coach Slay bolted after the inaugural season and gave way to the not-so-manly-named "Blondie" Williams, and their second season was a 1-5-1 letdown. The USM coaches were fly-by-night posts for the next 20 some-odd years, with coaches rarely staying more than a season or two. Thad "Pie" Vann changed all that in 1949, when he took over coaching duties and didn't relinquish them until 1969. Pie won at a respectable 70% clip during his tenure, upset Alabama twice, and was inducted into the College Football Hall of Fame in 1987. As for the "Pie" nickname? No clue...but I'm positive the pie was rhubarb. 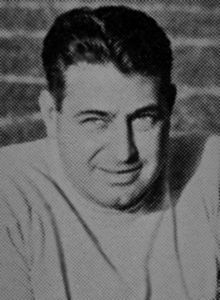 Any way you slice it, Pie is a USM legend (my rimshot now, if you please)

6) The Golden Eagles play their home football games at M.M. Roberts Stadium (capacity 36,000, no relation). Prior to 1976, the Confederates Southerners Something-or-others played at Faulkner Field...which started out as a small 4,000 seat venue that was financed by businessman F.E. Faulkner and built with "free" labor by out-of-work Depression-era workers. The stadium soon became known as "The Rock" in reference to prison rock-breaking crews because when the permanent concrete stands went up in 1938, the Southern Miss football players helped haul the concrete—voluntarily or not. When the stadium was basically rebuilt in 1976, the new name became M.M. Roberts Stadium, to honor a board of trustees member by the same name. People still call it "The Rock", of course—but Dwayne Johnson would prefer if they didn't.

5) You probably already know that a Wrangler Jeans pitchman named Brett Favre played quarterback for the Golden Eagles, but you might not have known that he was recruited as a defensive back. Favre received his only scholarship offer from USM in 1987 and after expressing his desire to play QB faced a daunting depth chart climb—he was seventh on the team's QB depth chart (apparently—in the 80s, teams had 7 quarterbacks). By the second half of the third game of the 1987 season (against Tulane), Favre took over the starting job and never gave it up. He led the team to upset wins over Alabama and Florida State and survived a near-fatal car crash during his time in Hattiesburg. Favre went on to an illustrious NFL career (mostly) and threw over 500 TDs and 70,000+ yards (300+ INTs too). He officially retired in January of 2011...but don't hold him to that!

4) Some claim that Hattiesburg, Mississippi is the birthplace of rock and roll since 1936 recordings in Hattiesburg by Blind Roosevelt Graves and his Mississippi Jook Band "featured fully formed rock & roll guitar riffs and a stomping rock & roll beat". The "rock band" consisted of a guitar, piano, tambourine, kazoo and more than one blind guy. The kazoo remains a staple of rock and roll music to this day. 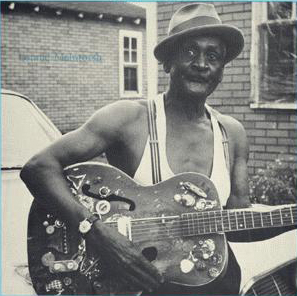 3) Cabana-wear musician Jimmy Buffet is a Southern Miss alum. The executive director of the school's student union has been trying to get ahold of him for 30 years to tell him his shaker of salt is in their lost and found.

2) Southern Mississippi's campuswide "rock" obsession runs deep, and one of their most highly prized campus landmarks is the "Little Rock"—a not-so-little sedimentary (guessing) boulder that is given a fresh coat of gold paint before each home game along with some "spirited words" about that week's opponent. Which reminds me of my favorite Little Rock joke: Q: How many teamsters does it take to paint the Little Rock? A: Seven...you got a problem with that?! 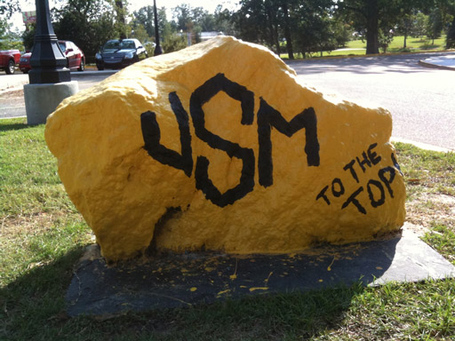 1) Because Southern Miss doesn't exactly have the best history when it comes to race relations (General Nat, anyone)...they now take a pretty hard line on any cultural insensitivity. Take the example from the NCAA tournament when Southern Miss band members stirred up a controversy by chanting "Where's your Green Card?" at Angel Rodriguez—a Latino player for Kansas State. The school didn't just wag their finger at the offenders, but revoked the scholarships of the five guilty pep band members, kicked them out of the band and made them take a 2-hour cultural sensitivity training course. Let that be a lesson to all: think before you chant (or heckle a student athlete at the supermarket).