After eight weeks of football, the Broncos are on track to do something they do pretty much every year: create hot debate and stir America's hatred in the BCS conversation. At No. 19 in the BCS standings, now would be a good time for the rest of the country to get apoplectic about the 2012 Broncos busting a big bowl. A big bowl like ...

The Broncos are still getting little help from the computers (stupid formulas that do not account for spending the weekend in Laramie, Wyoming, as a traumatic event), but that's okay. Human voters are stuck in their ways enough to keep moving the Broncos up, as decades of polling reflexes have taught them to do.

Boise State must only get to No. 16 in the final BCS standings and have a BCS conference champion - probably the Big Ten, maybe the Big East - finish below them. This seems very possible now that the Big Ten's best hope is a flawed Nebraska team.

Why the Orange Bowl for the Broncos? The Orange Bowl gets last pick of BCS eligible teams, and I would bet that the other BCS bowls saw what happened when the Broncos played BYU and they all want no part of that. The opponent in Boise State's fairy tale Orange Bowl would be the ACC champion, which figures to be either Florida State or Clemson. One of those schools will draw maybe Duke in the ACC title game.

Conceivably, the Broncos could be a more attractive option than the Big East champion should Rutgers or Syracuse or - gasp - Temple pulls out a conference title out of its hat. If so, then the Sugar Bowl would take Boise State and leave the Big East to the Orange.

Possible opponents include: an SEC team (to replace the one the Sugar loses to the national championship) or Notre Dame (Bronco fan pipe dream).

The Vegas Bowl gets first choice of MW teams, and its first choice is and always will be Boise State. If a BCS bowl doesn't happen, this figures to be the next most likely landing spot, maybe even if the Broncos fail to win the conference. Bronco fans travel. Most other MW teams' fans do not.

The Pac-12 currently has five bowl-eligible teams, and the Vegas Bowl's pick here could be UCLA, Arizona, Arizona State, or Washington. How weird would a bowl game against Washington be, with the Broncos opening against the Huskies in 2013?

The Pac-12 looks to have eight bowl eligible teams this season, and if more than one makes the BCS, then that would leave the New Mexico Bowl with last dibs. Last dibs could be the same options as the Vegas Bowl, so ditto what I said up there. 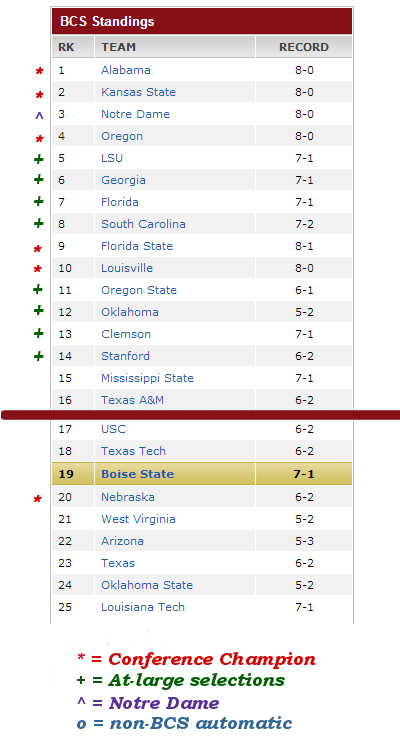 If the season ended today, Boise State would not be in a BCS bowl, but not for lack of trying. Here are the teams that would be.

What follows is an NCAA postseason according to my favorite playoff format (16 teams, 11 conference champions, five at-larges, seeds from the AP). Conference champs are in italics, even the Sun Belt one.