Despite their horrific record (1-6), Wyoming is a D-1A team. And any D-1A team is capable of beating another on any given Saturday. It is for that reason, if no other, that Boise State must bring its A-game and treat Wyoming with the respect it deserves. Peel back the layers however, and you'll see that Wyoming is much better than their record.

Share All sharing options for: Wyoming Players to Watch

The theme of Boise State's opponents this year seems to be "Wolves in Sheep's Clothing". Yet again, we face a team whose record belies its actual performance. Bad luck, injuries, and strong opponents have conspired against the Cowboys in ways no one could have expected.

Wyoming's 2012 campaign is a shock to everyone. The Cowboys were the surprise of the MWC last year, finishing with a conference record of 5-2 and going to their second bowl in three years (The New Mexico Bowl). Surprisingly, the Cowboys really haven't underachieved this year. They've just had the law of averages - and then some - come back to haunt them.

The collective winning percentage of the six teams the Cowboys lost to is .750. Here's a brief rundown of their season:

Most of these are what one might call "Quality Losses". The Cowboys are not getting blown out. They're not losing to the Idahos of the world (although they somehow allowed the Vandals to stay in the game during their sole win). They aren't losing when all their players are healthy. In short, don't think about their record. Think about the totality of their work.

With a healthy Quarterback, how will the Cowboys respond after such a disappointing season? Don't be surprised if they give us a test. And don't be too surprised if they actually pull off a win. This is after all, a team that could just as easily be 5-2.

Wyoming was picked to finish 4th in the MWC by Athlon Sports. They are angry, healthy, and playing in front of the home crowd. For those making the trip, do all you can to cheer on our Broncos. They're gonna need it.

This season, despite missing two games to injury, Wyoming QB Brett Smith has passed for 1335 yards and has a TD to INT ratio of 14:6. His QB Ranking is the 25th best in the nation.

Unfortunately, Mr. Smith wears his emotions on his sleeve. He was penalized not once, but twice in the loss to Nevada for unsportsmanlike conduct. The second penalty resulted in him being ejected from the game during the 4th Quarter; after he left the game his teammates lost the lead and the game. If he can control his extracurricular activities, he could have a huge impact on the outcome of Saturday's game. 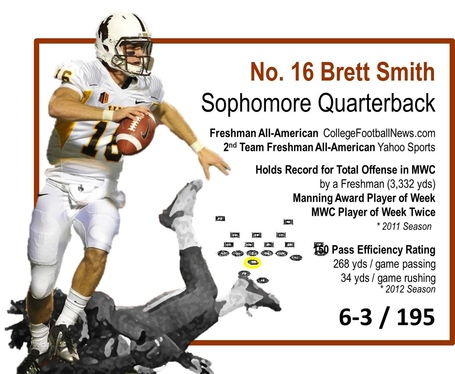 Mike Purcell brings experience and leadership to a defensive line depleted by defections to the NFL. A four-year starter, Mr. Purcell will do his best to contain DJ and Jay Ajayi up the middle. If he and his fellow linemen can limit our rushing attack, it could be a long day for Joe Southwick. 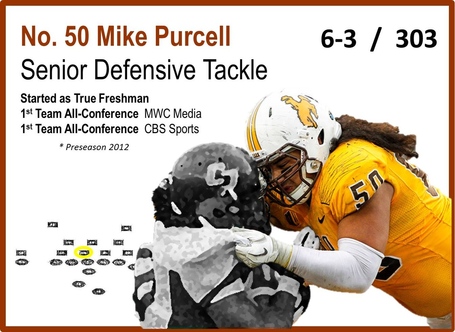 Luke Ruff anchors a solid defensive backfield for the Cowboys. He landed on this year's Lott IMPACT Trophy Watch List. By the very nature of the award's name, Mr. Ruff has the ability to have a major impact Saturday. Last year, Luke earned 2nd team MWC honors. Carrying a 3.5 GPA in civil engineering, Mr. Ruff is not only athletic, but smart. He has earned academic honors every year and uses that intelligence to his advantage, playing defensive coach on the field. Keep an eye on how well he is able to adjust his defensive formations during play. 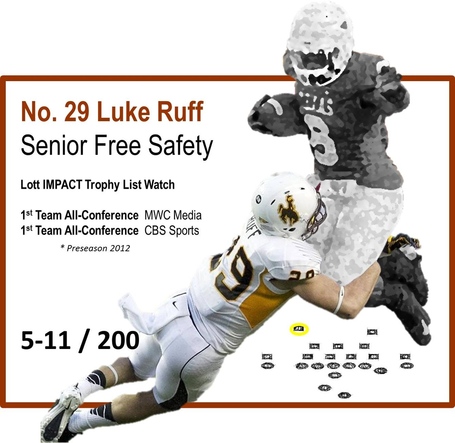 Sophomore Cornerback Blair Burns is probably Wyoming's most talented athlete. Starting every game as a Freshman, he earned Freshman All-American honors at the end of the year. Joe will have to be selective in his throws with both Mr. Burns and Mr. Ruff in the secondary. 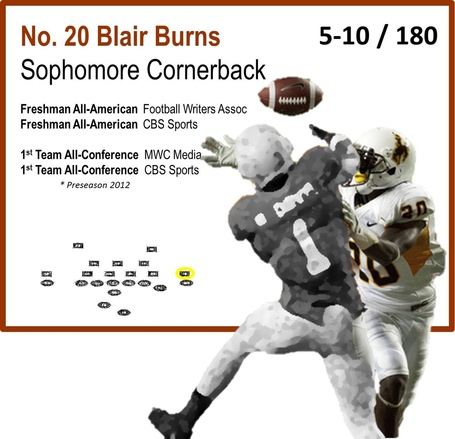