Last week, I pegged the Orange Bowl as Boise State's most likely bowl landing spot, so what went wrong in one week's time to change my mind? Boise State beat UNLV by four scores, and the BCS computers counted this against them.

Boise State's strength of schedule will be an issue from here on out for the computers. Human voters could care less, which might be BSU's saving grace. The Broncos lost ground in the computer polls, gained ground in the BCS standings, and look very much on the bubble for getting to the magical No. 16 spot and a (mostly) guaranteed BCS bowl. If it's going to happen, it's going to be close. This week, I'm pessimistic. Next week, SUGAR BOWL YOU GUYS!

As far as who Boise State might play in this projected Vegas Bowl, the Pac-12 has developed a few tiers so far this season. Oregon, Oregon State, and USC are in the top tier. Colorado, Washington State, and Utah are in the bottom tier.

The Orange Bowl has last pick of BCS-eligible teams, so the thinking is that a No. 16 Boise State squad would land in Miami as the least desirable of the bunch. That's fine by me. They still give millions of dollars out regardless of how desirable your resume and starting quarterback are.

The opponent in the Orange Bowl would be the ACC champion, which figures to be Florida State or Clemson but could conceivably be Duke or NC State or anyone other than Boston College really.

The second-to-last choice among BCS bowls goes to the Sugar, which might want a Boise State team with tradition and history over a three-loss Big East champion that struggled to beat South Florida. To get to three losses, Rutgers and Louisville will need start losing games fast - a challenge no Big East team has ever backed down from.

The New Mexico Bowl will only take the Broncos if Boise State fails to make a BCS bowl, fails to win the conference, and fails to convince someone - anyone - to take them. A bowl eligible New Mexico team would make more sense here, kind of like how a home town Boise State team made sense in the Humanitarian Bowl so many years back (when the Broncos were just happy to make a bowl and didn't have the courage to tell people they didn't want that bowl to be the Human one).

This would be worst case scenario and probably lead to more people razzing Joe Southwick at Winco. 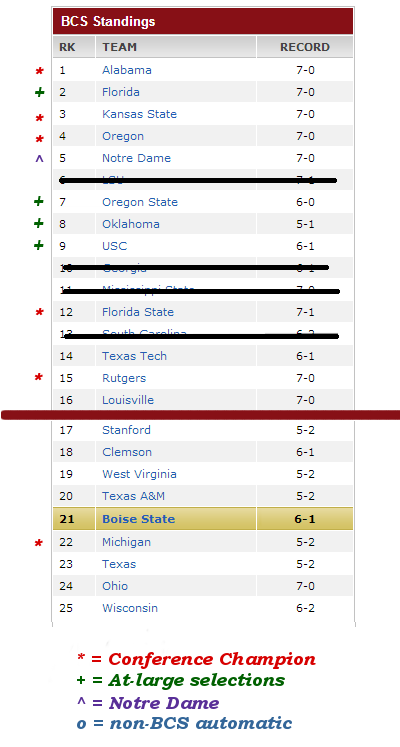 It's the same five bowl matchups as last week. Give it a couple more Saturdays and I'm sure none of this will be teh same.

What follows is an NCAA postseason according to my favorite playoff format (16 teams, 11 conference champions, five at-larges, seeds from the AP). Conference champs are in italics, even the Sun Belt one.