Boise State will be wearing black jerseys on Saturday in honor of college kids thinking black clothes look cool. It will be the gothiest game yet! A funeral on the field! An Idaho Vandals tribute! The uniforms do look sharp, as most things do in all-black. Fans are encouraged to wear black to the game, which is Boise State's kind way of saying, "Go buy some black Boise State stuff at full price because we know you don't have any." 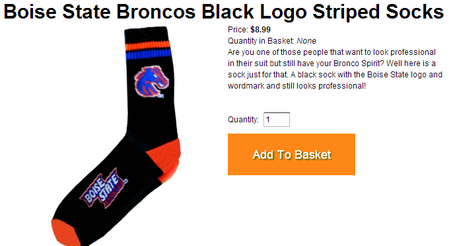 The soft underbelly of the Boise State schedule begins this week and continues through November with games against Wyoming, San Diego State, Hawaii, and Colorado State. How will the Broncos perform against less-than-stellar competition? Can Nike dream up enough new uniform combinations to get Boise State players geeked about traveling to Laramie? All-pink unis would do the job.

It is Chris Petersen's job to say nice things about the opponent in his weekly press conference, and so he did. Should we believe him? The Runnin' Rebels did take Nevada to the wire last week, but a) that game was at home and b) UNLV hates Nevada with such passion that they refuse to call them anything but Nevada-Reno. I can get behind hate like that, but it will take some awful creative marketing folk to come up with hate-filled motivation for playing Boise State.