With the release of the BCS standings and the debut of all the important polls in America, it must be time to start making wildly inaccurate predictions about the postseason. Hey, I'm good at that! Here's proof.

If the season continued to play out the way it has over the past seven weeks - with Boise State continuing to beat everyone by 10 to 15 points - the Broncos will find themselves in a BCS bowl, by definition if not merit. That BCS bowl? Probably the Orange one, considering it has the last pick of the BCS bowls and a one-loss non-BCS team will always be the last choice.

The Orange Bowl also features the ACC champion, which at this point in the year looks to be either Clemson or Florida State. The game takes place on New Year's Day for those of you who like to confidently book air travel and hotel based on blog posts.

If, say, Boise State qualifies for the BCS and so does a three-loss Big East champion, the Sugar Bowl may choose the Bronco brand over the Cincinnati albatross.

In all likelihood, if Boise State fails to make the BCS, the Vegas Bowl would be thrilled to welcome the Broncos for the third straight year thanks to Bronco Nation's affinity for travel and spending money in Las Vegas. The Vegas Bowl gets first choice among Mountain West teams, so it could take the Broncos even if BSU doesn't win the conference championship. In-state Nevada and nearby Fresno are other options.

One difference with this year's Vegas Bowl than in past years is that the 2012 version will be played on a Saturday afternoon. So you could see a football game, hit a buffet, and get hypnotized on stage all in the same day.

The New Mexico Bowl kicks off bowl season at 11 a.m. MT on December 15, just two weeks after Boise State closes the season against Nevada. I would imagine this game would love to have the hometown Lobos get bowl eligible and lose a home bowl game to a Pac-12 team.

The last landing spot for a MW team is in Fort Worth on December 29. See below.

There are not a lot of good CUSA teams (only three are above .500). The one saving grace of this game is that it is in one of Boise State's recruiting hotbeds. 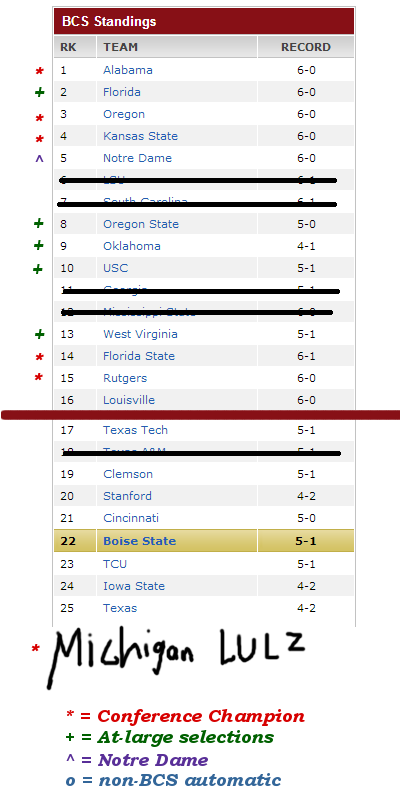 It is way early to be making pronouncements about BCS bowls, but sensibility has never been one of the Internet's strong suits. OBNUG will feature much more well-reasoned BCS discussion later this week, but for now, here are some guesses.

Playoffs are coming to college football in the barest of minimum forms (four teams, three games). It is progress, but it is still a ways off from ideal. What follows is an NCAA postseason according to my favorite playoff format (16 teams, 11 conference champions, five at-larges, seeds from the AP). Conference champs are in italics, even the Sun Belt one.