The Boise State defense, playing at its BYU level, completely crushed the previously high-powered Fresno State offense, limiting the Bulldogs to one late touchdown in a 20-10 win. Defensive line studs Demarcus Lawrence, Mike Atkinson, Ricky Tjong-A-Tjoe, and Sam Ukwuachu pressured Fresno quarterback Derek Carr all afternoon, turning the Fresno offense into the - I don't know - Idaho offense? It looked bad and the opposite of explosive.

Points came courtesy of a Joe Southwick touchdown pass to Geraldo Boldewijn, a 28-yard touchdown run by D.J. Harper, and two shorter-than-extra-point field goals by Michael Frisina. For the day, Harper had 122 yards rushing, and his yards combined with those of Jay Ajayi topped 200. The Broncos outrushed Fresno State 215 to 56.

Next up for Boise State: UNLV, which lost 42-37 to Nevada today.

Demarcus Lawrence got to Derek Carr for the third time, forcing a fumble that Mike Atkinson landed on. The Broncos failed to score, but the turnover came late in the fourth when the one thing Fresno couldn't do was turn the ball over.

D.J. Harper's 122 yards and a touchdown were the difference in the Bronco win. Give a runner-up MVP to Jay Ajayi and his 91 yards.

Did Boise State cover? Yes, actually. The Broncos were seven-point favorites and won by 10.

What to look forward to

The Broncos host UNLV next week, and BSU will be wearing all black uniforms and playing in front of a blacked-out crowd (fashionably, not TV-wise). 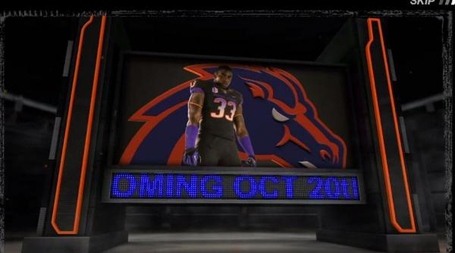