"If you know the enemy and know yourself you need not fear the results of a hundred battles." —Sun Tzu

This weekend will mark the end of an era for the Boise State Broncos—the last meeting with the Fresno State Bulldogs (for the foreseeable future). Fresno State once was thought to be a hair's breadth away from becoming what Boise State eventually did become...and a lot of it came on the heels of the Broncos' 2001 defeat of the then-8th-ranked Bulldogs. The series has never even really been close after that—every year (save 2005), the Bulldogs look like a formidable foe, but just can't seem to get the better of the Broncos. Will this last meetup be more of the same, or will Fresno State finally get back in the win column in a bit of an off-year for the Broncos? It should be fun to find out.

Given that this may be the last meeting between the schools, I figured I'd do a bit of a "best of" know your enemy this week. Some facts are new, some aren't...but they're all good, so take this opportunity to know this enemy for possibly the last time. WIll it be "see ya soon" or "requiem for a team"?

8) In 2009 and 2010, Fresno was ranked last and third from last, respectively, in a study of the smartest cities in the United States. If you're looking for a yardstick comparison—based on the study's grading criteria (college grads, voter engagement, reading habits, etc) Fresno was tagged with an IQ score of 3, while Raleigh, NC...the top performer in the same study had an IQ score of 170. This reminds me of a great joke a friend from Fresno always tells me: "Banana".

7) In 1893, an illiterate building contractor named Joseph Spinney sat on the Fresno board of trustees. Spinney was an enormously corrupt figure and had gained influence by representing the vice interests of the town (you know...gambling, booze, prostitution, hamster racing...)—he also held a powerful swing vote that he used to push through political appointments, secure building contracts (for himself) and influence the hiring of police officers and firemen. Spinney was made chairman of the board, effectively making him the mayor of the city...a position he held for a full ten minutes before resigning and nominating pal C.J. Craycroft to take his place (a slam-dunk nomination, since he still held that mighty swing vote). Spinney's portrait still hangs in Fresno's City Hall along with all the other past mayors despite him having served just slightly longer than Kellen Moore usually played after half-time. Bummer too...shady businessmen that amass wealth and influence by operating brothels and saloons generally make really good politicians. 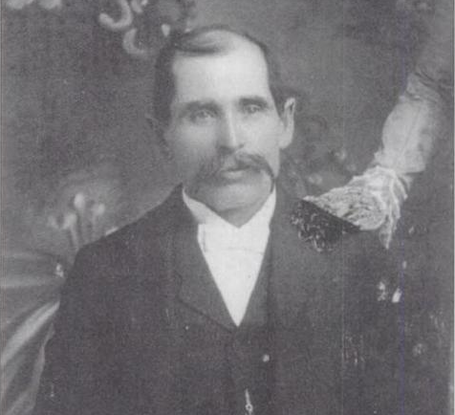 5) Former Boise State head coach Lyle Setencich is a Fresno State alum. After serving as DC for the Broncos during some of their Big Sky glory years, Setencich—which is pronounced "Skip Hall"—became one of the more "meh" head coaches in the program's storied history. Setencich was a shade over .500 in his 4 years at the helm (24-20), but committed the unforgivable sin of never beating Idaho (a very en vogue thing to do in the 80s) and guiding the team to the first losing season in 40 years—something that made Lyle Smith very angry. 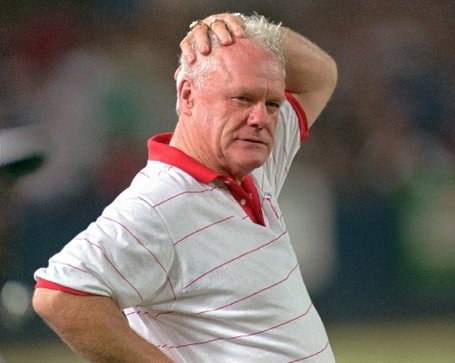 2) Fresno played their first season of collegiate football in 1921, but had a disappointing 2-5 season under head coach Arthur Jones (not the guy from Laugh-in...that's Arte Johnson). The fledgling squad's only wins came against the Modesto JC and Cal Tech, and suffered two losses to Fresno High School and their first ever loss to future-rival San José State. The next year, Jones righted the ship and led the team to a 6-1record and a California Coast Conference Championship, although against still largely high school squads and possibly traveling bands of hobos.

1) Since 2006, Fresno State and Boise State have competed for the coveted "Milk Can", which to the surprise of many turned out to be an actual milk can—albeit a glorious one. The Milk Can was actually created in 2005, but was not finished in time for the annual contest—which, in a hilarious twist...was actually won for the first and only time in the modern series by Fresno State. The following year, the Broncos took down Fresno en route to an undefeated, BCS-busting campaign and took home the chromed-out can that rapper Lil Jon would probably get his milk delivered in if that sort of thing were still fashionable. The can has resided with the Broncos ever since and Chris Petersen will wear it around his neck, Flava Flav-style, when he goes clubbing (which is never). Since the Fresno series may well end this season, this is the last chance for the Bulldogs to take home the prize. From our cold, dead HANDS! 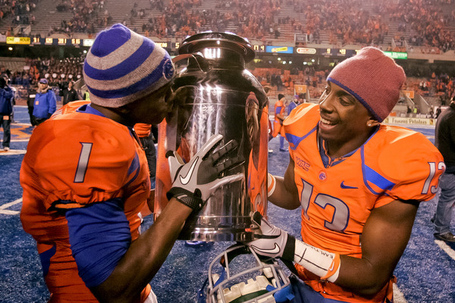