Yep, it's time to do battle with another one of them Carr boys from across the tracks. Seems they can never get enough of us. This time, little brother brings with him some pretty tough fellas. It'll be a fight to the finish. Here's hoping we end up on top when the dust settles... or the cows come home to roost. Or somethin' like that!

If Coach K was looking for a team to test his defense, this is it. Fresno State is loaded with weapons on the offensive side of the ball. And their defense ain't bad either.

Just a point away from being 5-1, Fresno State has played some solid ball this year. Their only "real" loss is to Phil Knight's Chip Kelly's No. 2 Quackers. Although it matters not, the Bulldogs did manage to keep Oregon's margin of victory to its lowest of the year, a * cough * respectable 17 points.

Tulsa (Fresno State's other loss) might argue with the statement above. At 5-1 themselves, the 2012 Hurricane team might do some BCS-busting of their own this year. If so, Fresno can say it lost two "real" games so far.

One things's for sure: rookie Head Coach Tim DeRuyter does not want to make Saturday their third.

Some of Fresno State's Impact Players may be familiar; others may not. Let's start with the obvious: Derek Carr. These dang Carr brothers have been occupying Fresno State territory so long, you'd think they'd be wrestlin' for a border war. 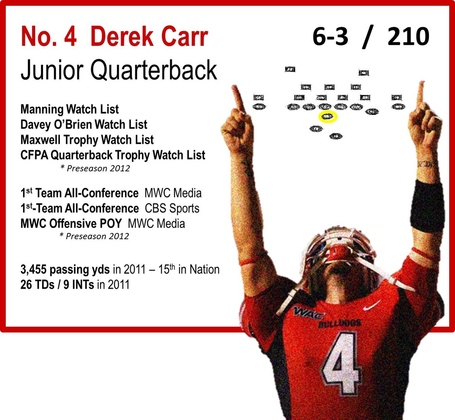 Backing up Derek is yet another of Fresno State's famed running backs. This time around, it's Robbie Rouse. Shattering the school record for rushing yards just a few games into his Senior Season, Robbie has already made a name for himself. Can he cement his legacy by being part of the Fresno squad that finally gets revenge? Let's hope not. But beware... Robbie's got tons of talent. I'd be shocked if he didn't run for his season average of 129 yards. Yes, that's right... Robbie's averaging 129 yards per game this year, up slightly from last year. 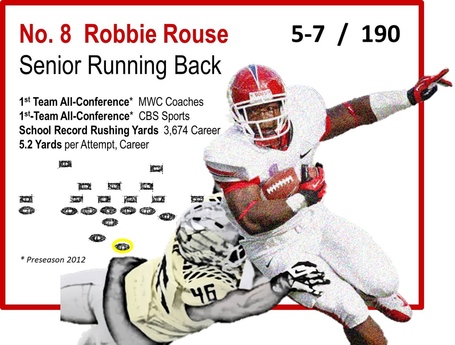 If Fresno State doesn't scare you on offense, I'd like some of what you're smokin'. To make matters worse, Fresno State is far better on defense this year than they have been in years. Moving from a 4-3 to a 3-4 has worked well for the Bulldogs. It probably didn't hurt that all-everything Strong Safety Phillip Thomas is back after breaking his leg in last year's Fall camp. Plus, Mr. Thomas is defining the word IMPACT whenever he can. Making up for lost time, this year he's already had 6 INTs, 2 of which were returned for a touchdown. Add to that 2 forced fumbles, a fumble recovery, 2 sacks!?, and 29 solo tackles. Let's hope we figure out some way to slow him down, cause Mr. Thomas has got IMPACT written all over him. 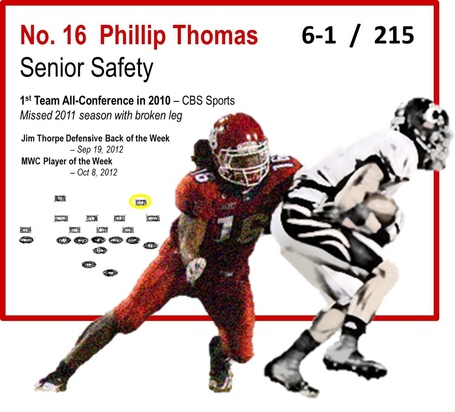 Phillip isn't the only one who can quickly turn a game around. His pal Travis Brown plays linebacker and is mighty good at it. Those in the know seemed to think pretty highly of Travis too, placing him on a couple of Blue-chip preseason award lists. Last year, Travis led the 'Dawgs in tackles. He's hungry for more, and will be chomping at the bit to get him some Bronco tackles. Ummm, let's not. 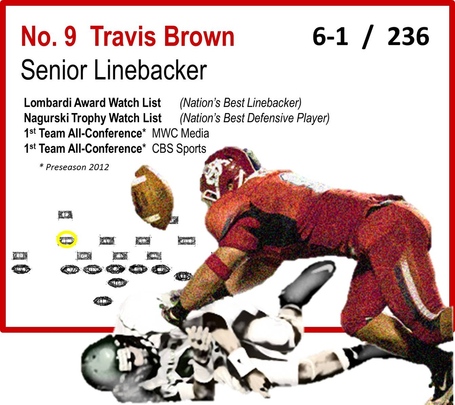 As always, let's hope all players play up to their potential, have a blast playing the finest team sport in the world, and remain injury free. Oh and of course... here's hoping our Broncos come out on top!