Share All sharing options for: Chris Petersen to replace Chip Kelly at Oregon, says everyone [UPDATE: Kelly's not going anywhere]

UPDATE: Chip Kelly has turned down the Tampa Bay Buccaneers coaching job. Get ready for these rumors all over again when the Raiders start sniffing around. (HT: nearmiss) 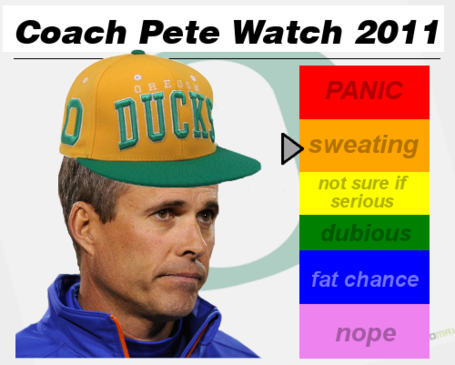 Sources say that Oregon head coach Chip Kelly is in talks to become the next head coach of the Tampa Bay Buccaneers. Everyone in Bronco Nation feels that should Coach Pete ever leave Boise it would be for the head job at Oregon. I'm just connecting the dots here, but THE SKY IS FALLING. THESE ARE THE END TIMES. PAT HILL WILL BE COACHING THE BRONCOS IN TWO WEEKS!

Deep breaths. For starters, Chip Kelly is still employed at Oregon. The rumor mill is on standby just in case.

There are even members of the local Boise media who think that Petersen would spurn the Oregon job to stay at Boise State.

So where does that leave us poor, terrified Bronco fans? For the time being, Coach Pete is in no danger of leaving Boise for Eugene, mostly because there are no open jobs in Eugene. The second that Chip Kelly signs on the dotted line with the NFL, you have permission to weep and gnash and set up vigil outside of Petersen's Boise home. It would be the practical thing to do. Stuff's going to happen pretty fast if it gets to that point.

What do you think about the Oregon job rumors? Are you on the side of the local media that thinks Pete will stay? Are you already making a wish list for the next BSU coach? Share your thoughts in the comments.