OBNUG roundtable: Who would you like to see as the Broncos' 13th game in 2012?

Share All sharing options for: OBNUG roundtable: Who would you like to see as the Broncos' 13th game in 2012?

In case you didn't remember, the offseason is kinda long and in between stops on LOI day and Spring ball can also get a bit boring. That's why here at OBNUG we've decided to begin a series of roundtables where we'll discuss topics both pressing and non-pressing alike. We'll wait to see how many more assistants we lose this week before attacking that one...this week's roundtable seeks answers to the question "who would you like to see as the Broncos' 13th game in 2012?"

Things get testy after the jump.

Drew: Besides giving Coach Pete a chance to work on his man tan, a trip to Hawaii during the regular season gives the Broncos a chance at a 13th game in 2012. Thank you NCAA by-laws, you owed us one! I've heard lots of game options being floated out there from the ridiculous (Idaho) to the sublime (Arkansas at JerryWorld). Frankly, neither of the aforementioned really get me all that excited, Boise State either needs a big money game or a sweet home game and the latter is what I believe must happen. With the move to the Big East in 2013, we've got some money coming our way, so I'm not so sure we need to be tackling these "big money" games out of necessity, and we already have a nice little opener against Michigan State to get up for. I think it's high-time the Bronco Nation was rewarded with a solid home game...the likes of which we haven't really seen since the 2009 opener against Oregon.

We got the SEC monkey off our back in 2011 and have punked the Pac-12 of late (with WSU and UW on future schedules for payback). We get the B1G game I've been coveting for a while with MSU, and the ACC seems old hat after our victory over VT. This all leads me to one conclusion: we need to schedule a Big 12 game for a 13th and we need to throw the kitchen sink at them to get them in Bronco Stadium. Oklahoma is right out—the hype surrounding the rematch would be big, but throwing such a young Bronco squad at them probably wouldn't be the best idea and we'd never get them in-house. Texas would have a nice storyline with Harsin in the booth and they did play at Wyoming a few years ago, so getting them in Boise wouldn't be impossible, but I'm sure they'd want a 2-1 out of the deal and I'm not sure we have the future schedule space to accommodate that move. I'm basically winding my way towards Texas Tech or Oklahoma State...two high-flying offenses that would add a fun dimension to the match up. Of the two...I think we have the best shot at landing Texas Tech. They played in Reno a few years ago and Mackay Stadium is a notch or three below Bronco Stadium. If they have an open date (or want one), I think this is a realistic match up from a conference I wouldn't mind a piece of.

Nick: I like your thinking about a Big 12 team. And Oklahoma State could be a really fun game, especially with them in a reloading year losing Blackmon and Weeden this year. The Big 12 is shrinking to 9 teams next year with the losses of Missouri and Texas A&M and the addition of TCU. This means that they will only have 8 conference games to play and currently the Cowboys only have 2 non conference games scheduled. Ditto for Kansas State and Texas Tech while Oklahoma only has one non conference game scheduled.

Surprisingly Texas Tech is already scheduled to play AT New Mexico and Texas State so I doubt they would be looking for an extra road game. Oklahoma State has already agreed to travel to Arizona for an opening week game so they might not be willing to travel again. Kansas State has two home games scheduled for their non conference slate, one involving Miami traveling to Manhattan. Now Oklahoma only has Notre Dame scheduled to come to Norman in late October so they should definitely be looking to fill their schedule, although they will probably be looking for an early date.
The Big 12 is going to have a bunch of open dates with their conference size once their conference schedule drops, so I think a call from Mark Coyle to those schools should happen very soon.
Found this site with all the schedules, by the way: http://www.fbschedules.com/ncaa/2012-college-football-schedules.php

Drew: Why'd you have to ruin my hypotheticals with scheduling realities? By the way, I did look for open dates and was unsuccessful, so you win the "how to use google" award for the day, Nick. I did, however, find this picture of a really ripped dog so I guess my googling did net some results.

Frankly, Texas Tech isn't a dream game by any stretch it's just that we've kinda run the gamut lately with OOC scheduling and the Big 12 has gotten off easy. Boise State has done well to schedule some games with geographical significance/appeal with the additions of UW, BYU, and WSU and I'm fine with waiting for those to come along. I think we play right into the hater's hands if we fill the open date with another MAC or C-USA game. This game needs to be against an AQ...and it needs to be a game that will provide our young team an opportunity to make another statement—the "home game" aspect is purely for selfish reasons (I really love those fresh mini donuts they sell at the games). The best way for Mark Coyle to step out of Gene Bleymeier's shadow and put his own stamp on the program would be for him to get out there and snag a solid home game and put to rest any suspicion of timidity.

Kevan (shows up late and looks rather flush): I'm not opposed to timidity with scheduling. Today's college football finds timidity sexy, or so it would seem since the most timid non-conference schedules matter very little by the time you get to the end of the year. Alabama, anyone? Here's where it hits home for me: Would you rather have a 12-1 Boise State team that is still very much alive for the Top 15 BCS threshold or would you prefer an 11-2 team that played a tougher schedule and then went back to the Vegas Bowl for the third year in a row? BYU, Southern Miss, and Michigan State are enough of a non-conference murderer's row (or, more accurately, a non-conference breaking-and-entering row) for me.

I propose the easy way out. Schedule a cupcake to go with the eclair of Miami (OH). Bring Idaho State to town. Throw a couple grand and coupons to the Anniversary Inn at Montana.

Personally, I would love to see Idaho fill that spot. Yes, I'm one of those guys, the type who enjoys incredibly lopsided rivalries that few people in the Boise State community find valuable. I missed beating the Vandals by four touchdowns last year. There was a hole inside.

And I guess if we're going to go the Big 12 route, then I'd really like to see a Big 12 pushover. What does the non-conference schedule look like for Kansas and the Fighting Charlie Weises? My Google skills always seem to turn up Ron Swanson cats. 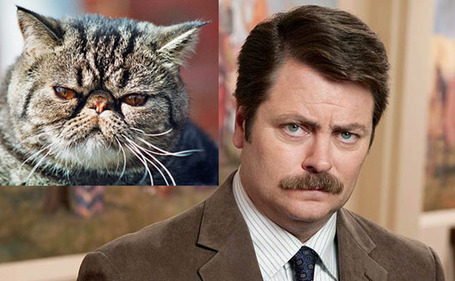 Drew: I guess maybe I tipped my hand there a little bit. I don't think Boise State will be a contender next year on the BCS level. I think we'll win the MWC in a walk, but I don't think we'll start the season ranked highly enough to make a huge dent nor do I think we'll make it through our OOC unscathed. For that reason alone, I say throw caution to the wind and bring in a big name to Bronco Stadium that gets the city buzzing again. Hey...if we can get by MSU early we might even be able to lure the GameDay crew back...you know, the one with Lee "@#$%" Corso at the helm. If anyone deserves to wear a stinky Bronco head in mid-September—it's Lee Corso.

Maybe it's the fact that Kellen Moore and co. barely made a single BCS appearance that's soured me on your approach, Kevan. Maybe it's that it will all be rendered moot next year with the Big East move. I just think that if there's a year to really go nuts, scheduling-wise, 2012 is the year. We're non-AQ and MWC lame ducks and will be incredibly young at the skill positions. Throw them in the fire and see what they've got (load them up with S'mores first).

Kevan: I have a feeling that our season prediction roundtable is going to have a very emo vibe to it. I'll put Dashboard Confessional on notice.

So is Idaho completely off the table for you guys? I know the Vandals are football challenged and all, but I'd like to think that history and tradition and rivalry and Robb Akey malapropisms at least entice you to entertain the idea. I'm on board. I'd love some company (I get bored easily).

Drew: The Vandals are dead to me and the regular season is too serious for a week of buffoonery. If they want to play in Boise every other year I suppose we could put down a tarp or something but I don't want them thinking that return trips to the Palouse are in order. I'm going to have to side with Bob Kustra on this one—mainly because I'm a horrible sycophant.

Nick: I do see what you're talking about with timidity in scheduling, Kevan, especially this year when we'll be breaking in a new QB. But I still would love to see a good, semi big name team come into Bronco Stadium to get the city buzzing like you suggest Drew. But I'd rather try to focus on the timing of the game. I would love to see a big time game in Bronco Stadium in October. In a perfect world, our new QB could get his legs under him like Kellen did against Idaho State during his first game. Unfortunately this won't be the case with the baptism by fire in East Lansing. But I still like the idea of giving everyone a team to look forward to down the stretch like the TCU game last year.

Kevan: So you're saying a TCU rematch? I'm in. 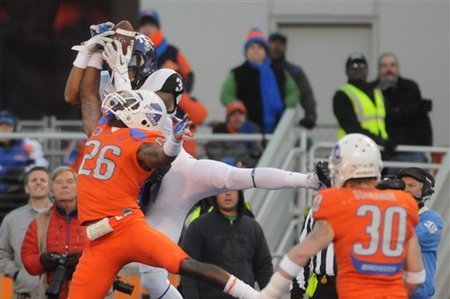 Which team do you think the Broncos should play in their 13th regular season contest next year? If you say "Idaho" an angel loses his wings.