Top 25 analysis: When does Boise State make its next jump?

Share All sharing options for: Top 25 analysis: When does Boise State make its next jump?

On the heels of their Georgia-whupping on Saturday, Boise State climbed in both the AP and Coaches polls to spots No. 4 and No. 5, respectively. At this rate and if my math is correct, the Broncos will be No. 1 by October. Hooray!

Of course, stuff will have to happen ahead of the Broncos for BSU to make its next move upward, specifically "stuff" in the form of losses to some BCS elite. When can we expect those losses to come? Join me after the jump for a taste of what to expect in the coming weeks and months.

Below, I've listed the four teams ahead of Boise State in the polls as well as when we can expect some downward mobility in the form of the Big L from each school. Let's start scoreboard watching.

Of the teams behind BSU, the one with the best shot of passing the Broncos is Stanford. The Cardinal dropped below BSU this week thanks to a blowout win over frosted cupcake San Jose State. Stanford has Duke this week (for some reason), so I wouldn't expect things to change just yet. 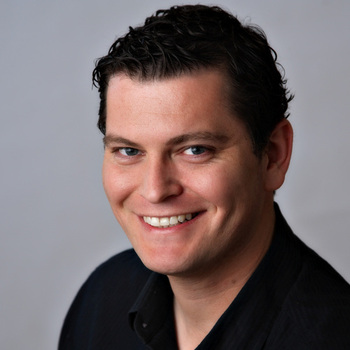 One of college football's leading writers and analysts, Andy Staples turned in a turd of a Week Two poll when it came to ranking the Broncos.

Boise State is No. 12, according to Andy Staples, and No. 4, according to most everyone else. What could Staples possibly have been thinking? He took to Twitter to explain himself.

@BadWillHunting @OBNUG I really liked what I saw from Wisconsin and Virginia Tech, and I thought they deserved to move up.less than a minute ago via TweetDeck

To recap, Wisconsin beat UNLV by 34 points, failing to cover the spread. Virginia Tech stomped Appalachian State, whose claim to fame is being an FCS school and beating Michigan half-a-decade ago.

The worst part is that Andy Staples was at the Georgia Dome on Saturday night, watching Boise State in person. If he liked what he saw from Wisconsin and VaTech on the TV, then he sure should have enjoyed a complete evisceration of an SEC school in front of his stark naked eyes. Do people visit the Mona Lisa and go away wanting to hang framed Garfield cartoons on their walls? I highly doubt it. Staples saw football perfection on Saturday night and thought it was slightly better than Nebraska beating Chattanooga by 33. 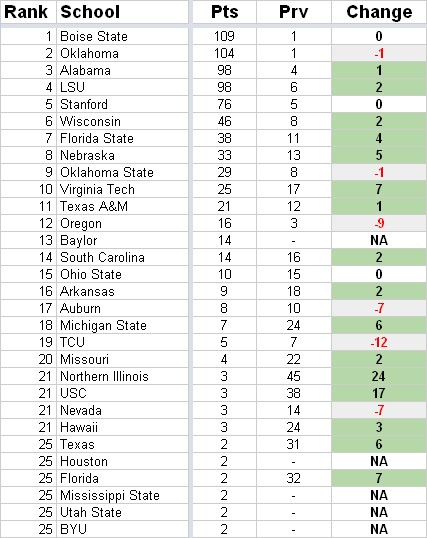 This week's poll pretty much went as expected with the Broncos maintaining their first-place spot, Baylor joining the party at No. 13, and those plucky Utah State Aggies tying for 25th with two points for their efforts against Auburn. Who says winning is everything? Not OBNUG poll voters, obviously.

Abstained from voting due to washing their hair: no one.

OBNUG is proud to be part of the BlogPoll and humble enough to admit that our poll probably could use some fine-tuning. Do the fine-tuning in the comments, correct our obvious biases, and I'll update the final BlogPoll version before it hits the Internet presses on Wednesday. Make your voice heard. Share your thoughts in the comments.