Gameballs for Boise State vs. Georgia

Share All sharing options for: Gameballs for Boise State vs. Georgia

What a way to start a season. Boise State cruised to a win over Georgia, sparking national title conversations across the country and "Georgia's no LSU!" cries from SEC country. Personally, it was just thrilling to see Boise State back on the field, picking right back up where they left off from a season ago. Why should I have thought anything different?

Gameballs are after the jump. Feel free to award your own in the comments.

Player of the game as voted on by readers

I should probably get used to typing his name in this space because Moore is great and readers love him. He was clearly the better quarterback on Saturday night, which is no offense to Aaron Murray. Zeus would be a pretty cool guy until you sat him beside God Almighty and started noticing the differences.

Moore finished the night with three scores and 82 percent passing. He hit nine different receivers and found seven different guys for at least two completions. It helped that the Georgia defense was playing tight zone coverage on grass, leaving BSU receivers to run free. It helped even more that Moore always knew the right place to go.

Player of the game as voted on by Aaron Murray

Clark McKent sacked Murray two-and-a-half times and was the poster boy for a Bronco defensive line that was clearly superior on Saturday. My favorite McClellin sack of the night came on the first play of Georgia's final possession when McClellin took off like a blur around the right edge and was draped on Murray's back before Murray knew what hit him.

In Andy Staples' recap of the game, he had a line about the physical-appearance difference between Boise State and Georgia. I like to think he was talking about McClellin when he said this:

Watching the players warm up left little doubt ... Georgia looked like an NFL farm team. Boise State looked like a Mountain West team, and a recently minted one at that.

Well, looks can be deceiving. I think we can all agree on that now.

Several different Bronco newcomers played lights out on Saturday night, but I am going to give this gameball to the sub who had the least amount of time to prepare for his baptism by fire. When Joe Kellogg went down early against Georgia, it could have been a huge advantage for the Georgia defense. But it wasn't.

Quite the opposite in fact. Spencer Gerke played the game of his career filling in at guard, and the Bronco offense didn't miss a beat. Combine Gerke with fellow newbies Jake Broyles and Charles Leno, and you had three Boise State players getting their first significant playing time in one of the most significant games in program history.

I think the photos speak for themselves. 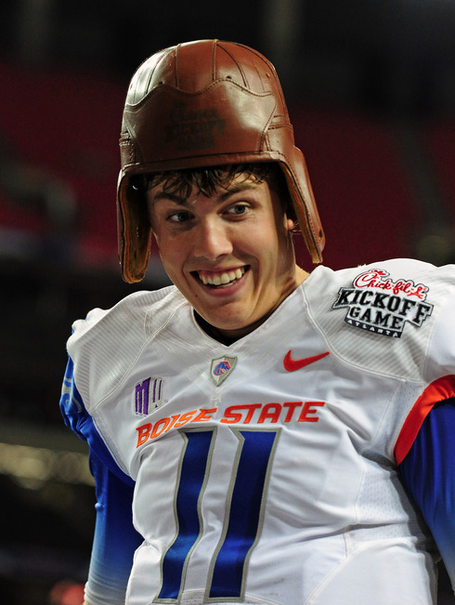 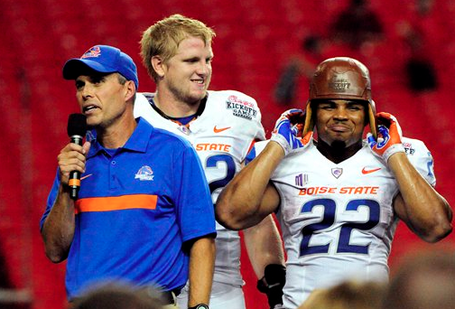 Stat of the game

The Boise State offensive line allowed zero. The Georgia offensive line did all they could to only give up six. Seriously, it could have been a whole lot more than six.

The Broncos benefited from super playcalling from a guy who was playcalling a Bronco game for his first time. Pease was dialed in pretty much from the moment his scripted playsheet ran out and he started freestyling. You know how there were always Bronco players wide open all over the field? Some credit should go to Pease. You know how Boise State was able to control the clock with the running game late? Pease again. Keep that man away from BCS-conference job boards.

Favorite moment of the game

Boise State came out of the halftime lockerroom with a no-huddle drive that was simply unstoppable. I mean that literally because Georgia did nothing to stop it, watching helplessly as Kellen Moore completed six straight passes and marched the Broncos inside the Georgia 30. The Bulldogs had no answers, so they called timeout. And at that moment, every single person in the stadium knew that Georgia was in over its head. It was instant singularity of Boise State's greatness.

Breakout star of the game

The former Montana state player of the year scored Boise State's first touchdown and finished with five catches for a team-high 57 yards. I hear the state of Montana closed its schools today to honor him. 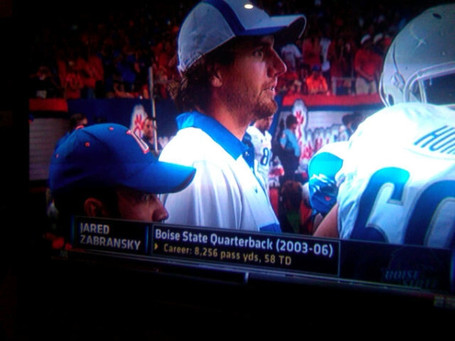 Worst interception of the night: Kellen Moore. I think he threw that one up for grabs just to make sure Aaron Murray would get no gameballs whatsoever today.

Best formation of the night: The Grant Hedrick read option. Hedrick came close to breaking a pair of runs and finished with 18 yards on two carries.

Worst gameplan: Picking on Jerrell Gavins. Georgia was obviously trying to test the Broncos' new corner, and the 'Dogs obviously failed. Gavins finished with a pick, a pass break-up, and shutdown defense all game long.

No one enjoyed himself more than Moore.

Worst surprise of the night: Boise State not having any fullbacks. The Broncos obviously did all right, and it was fun to see Mike Atkinson blast his way into the line of scrimmage a few times. Still, this is information I might like to know a little sooner than five minutes before kickoff.

What gameballs would you give out to Boise State players and coaches? What did you notice in the game that deserves mentioning? Share your thoughts in the comments.