The most important body part in Bronco Nation this week is Kellen Moore's right knee, a joint that has been discussed and analyzed ad nauseum. Was Moore limping Saturday night? Was he in pain? Was he as good on one leg as he is on two? We know the answer to the last question (a resounding yes). We're not so clear on the first two.

Join me after the jump for a look at Moore's sensational start to 2011 as well as other news and notes from the depth chart. Feel free to share your thoughts in the comments. 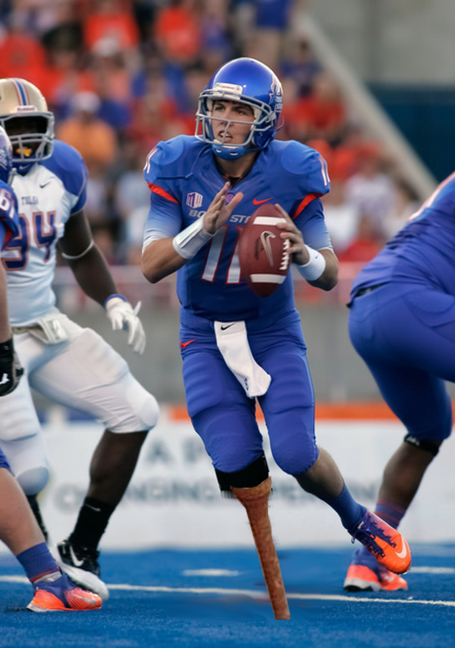 The good news is that Kellen Moore is playing better than he's played in his entire career. He is carrying this Boise State offense, and he is on pace for one of the best seasons in Bronco football history. The bad news is that he has no right knee.

At least that's the speculation on the talk radio stations this week as fear rules the day. Is Kellen Moore hiding a torn ACL? Did he give Thomas Byrd a knee for a knee replacement? Is Moore's knee acting as a drug mule? I should probably point out that I don't listen to much talk radio, so I'm just assuming these are the theories.

But even with a bulky knee, Moore had a stellar game and his first in 2011 without an interception. He has nearly 1,000 yards and 12 touchdowns through three weeks. That puts him on pace for a record year. Here are his stats, assuming Boise State makes a bowl and plays 13 games.

For perspective, the Bronco record for passing yards in a season is Ryan Dinwiddie with 4,356 in 2003. Kellen Moore's best season (and the No. 2 all-time) was 3,845 yards last year. The single-season touchdown record is 39, set in Moore's 2009 season. He and Jared Zabransky share second place with 35 TD passes. At the rate he's going, Moore will have 35 touchdown passes by the November 12 game against TCU.

Not bad for a guy with no right knee.

But enough about Kellen Moore, let's talk about Joe Southwick

Note: I may be the first person ever to have typed the above sentence.

Southwick came on in relief of Moore last week, and his performance was unanimously ... praised? Seems so, judging by the consensus in the local media and in postgame interviews. If my reading comprehension is true, this would be the first time that a quarterback earned rave reviews during a game in which no one really wanted him on the field. Stick that in your BroncoSports bio, Joseph!

How do we all feel about Joe Southwick quarterbacking the team next year?

My personal opinion: I did not see anything from him on Saturday night that made me think this won't be a two-, three-, or four-man competition in 2012. But I see the world through Moore-colored glasses, so what do I know?

There remain no updates about "ineligible" players Geraldo Boldewijn and Ricky Tjong-A-Tjoe or the reason for their "ineligibility." Coach Pete is just as frustrated as you are.

This week's completely-made-up explanation: Idaho-area Dutch Brothers Coffee locations named drinks after Boldewijn and Tjong-A-Tjoe. The Geraldoughnut latte and Capa-Tjong-a-Tjoe were best sellers, which drew the ire of NCAA officials. 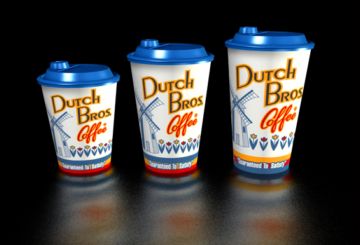 Defensive line depth under the microscope

Boise State was without three of its four starting defensive linemen for parts of Saturday's game. The Broncos survived, in part because they are used to running 8-deep on the line. But the medical trauma and drama in the trenches brought a harsh reality. If Chase Baker isn't healthy and Ricky Tjong-A-Tjoe is ineligible, the depth at defensive tackle becomes awful shallow. You buy some healing candles, I'll consult the Dutch embassy, and let's get this fixed.

What do you make of this week's depth chart? Worried about Kellen Moore's knee brace? Impressed by his passing stats? Glad he's not Dutch? Share your thoughts in the comments.