Share All sharing options for: How I learned to stop worrying and love Boise State football games

Three weeks into the season, the Boise State coaching staff is still looking for the Broncos to give a complete performance. (Also, no word on that churro machine.)

"I know we haven't seen it. I don't know if we have it in us. That's to be determined," coach Chris Petersen said. "There's no question we've got a long way to go. We better get there in a hurry."

As Coach Pete delivered that quote in Saturday night's postgame presser, Bronco Nation could be seen in the back of the room, nodding vehemently and crying, "Amen!" as if Petersen had just laid down the salvation message. We Boise State fans have been hard to please so far this season. And whose problem is that exactly?

Some might blame the problem on the Boise State football team for its aforementioned lack of precision. Do the Broncos not know they are God's gift to football? Among the nits there are to pick, we have ...

And yet somehow, this Bronco team is 3-0 and ranked No. 4 in the country, with the inside track to a BCS bowl and a standing invite to Pat Forde's dinner parties. We Bronco fans have it pretty good, sideways extra points notwithstanding. As such, I don't think the blame for our displeasure lies with the foibles of the football team or the ultimatums from the coaching staff. I think it lies with us.

And therein lies the problem in our Fall of Discontent. We Bronco fans have been finely tuned to expect great things play after play and season after season, and when greatness eludes us - even for a quarter-and-a-half in a 34-point blowout - we gripe. I've been there. In fact, I was just there on Saturday. And while I was trapped in my glass case of emotion, I realized this: There is nothing wrong with wanting the Boise State football team to succeed, but when success is determined on a play-by-play basis and on the touchy-feelies of a pretty win, something's not right.

A better outlook, in my opinion, is to just let go and enjoy the ride. Like Splash Mountain. So what if Disneyland replaces Brer Rabbit halfway through the ride with a backup Brer Rabbit? You're still having a blast at the happiest place on earth (and it was probably in Brer Rabbit's best interest to be subbed out anyway). Being a Bronco fan should feel the same, except with nachos and noisemakers and Star Wars-themed costumes. 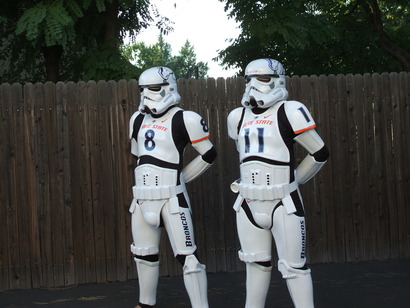 Let the coaches do the dirty work of fine-tuning. They get paid for it.

Recognize that this year's team is not last year's team. And that's okay.

Football is much more fun without the second-guessing and the Chicken Little routine. It's not an easy place to get to as a fan, but it's worth the trip. Plus, I hear there might be churros when you arrive.