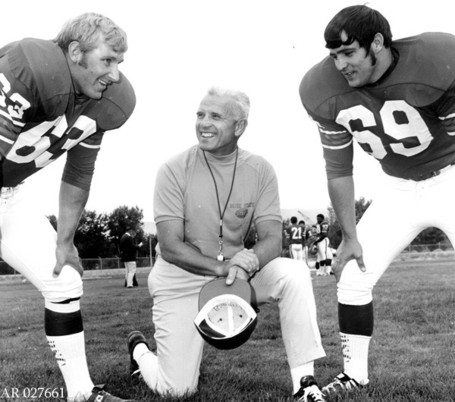 Somewhat buried in this weekend's local news feeds about Races for Cures and Bronco victories was the not-so-small item of the passing of ex-Bronco coach Tony Knap. Tom Scott, in yesterday's Scott Slant column, appropriately marked his passing  with a bit of perspective—Tony Knap is still the winningest coach in Bronco football history...and with the recent spate of coaching successes, that is saying something. If the Broncos continue on their current trajectory, coach Chris Petersen will likely pass Knap's record 71 wins some time this December, but Knap piled up his victories at a time when the future success of the Bronco program was still in doubt and at a time when the failure of the program to compete as a certifiable four-year school could have halted any progress the program has made since. It may be for that reason alone that Knap is the most important coach in Bronco history...and he'll always be remembered as one of the best.

Even Idaho Vandals have reason to mourn the passing of Knap, who, like Lyle Smith was an Idaho alum. Of course, the Vandals might have been mourning the loss of both of the aforementioned to the Treasure Valley years ago, and probably won't forget that it was Knap who took down the favored Vandals 42-14 in their first ever meeting in 1971. Truth is, Knap's legacy transcends both schools...before being handpicked by Lyle Smith as his successor (Smith had moved to the AD office), Knap had a successful career at Utah State, and after leaving Boise in 1976, became the winningest coach ever at UNLV.

But back to Boise.

Knap's 8 years at the helm are still the longest of any coach in the post-JC era, and his win percentage of 78% is behind only Dan Hawkins (82%) and Chris Petersen (92%). He won 3 conference championships with the Broncos and, more importantly, successfully oversaw the Broncos move to the College Division and then Division II, moves that some weren't sure the Broncos could handle (same folks that thought we'd flounder in Division 1, I wager). Here's something to think about though—even with the Broncos high level of success in Division 1, their first year they were just 2-10. In 1968, the Broncos first year as a four-year institution, and their first competing in the College Division, Knap led the team to an 8-2 record. The following year, they went 9-1 and Knap's teams never lost more than 4 games in a season during his tenure. That's consistency, folks...and consistency that defied the odds. The Broncos still are known for their consistency, even through adversity...and now you know why the Broncos, and really all of college football, lost a great coach, mentor, friend, and innovator the other night in Pullman, Washington.

As a young(ish) buck, I never had the opportunity to see Knap coach...if you're one of the resident OBNUG blue hairs (Munson...I'm looking at you oops, looks like you already got to it, Munson), we'd all love to hear some of your best Tony Knap stories. Also, if you'd like to read a very thorough retelling of Knap's storied career, check out this 2009 article from BroncoCountry.