Boise State and TCU are the only non-BCS teams in the Top 25 of the two major polls, so with a remaining schedule of all non-BCS teams, don't expect the Broncos to get a whole lot of help in the strength of schedule department. TCU will look good on the old resume, but who else is there?

I'm glad I asked. Here's a look at the remaining teams on the Broncos' schedule that might be ranked when BSU plays them.

See? Not a whole lot of help there.

Fortunately, rankings can be viewed in present time and future time. The Broncos might not face many ranked opponents on game day, but when the season is over and we're celebrating our BCS bowl berth, things could look a lot better. Georgia could be back in the Top 25. Toledo and Tulsa could be ranked if they challenge for their conference championships. If the WAC winner is either Fresno State or Nevada, the Bulldogs or Wolf Pack could be a candidate for some votes.

And hey, if things don't fall Boise State's way, it wouldn't be the first time. As Coach Pete likes to say, "Only worry about what you can control."

Note: I think he means bribes. 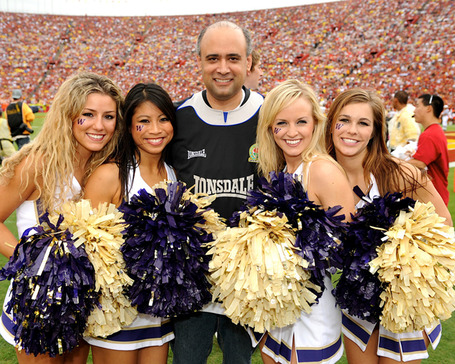 Traditionally this space is reserved for the voter who really screwed the pooch on his weekly ballot, but I thought I'd give someone credit for a job well done this week.

USC beat reporter Scott Wolf is the only voter to have Boise State as the No. 1 team in America, keeping the Broncos there despite impressive wins by Alabama, Oklahoma, and LSU. The man has convictions. He was one of two voters to start Boise State at No. 1 in the preseason poll. Arkansas' Tom Murphy was the other, but SEC speed finally got the best of him.

The Boise State love from Wolf is also impressive because he has done something that not even Boise State's own beat writer would dare to do. The Idaho Statesman's Chadd Cripe has the Broncos as the No. 4 team in the country. The OBNUG Top 25 poll (spoiler alert, below) even has the Broncos at No. 4, and we're a bunch of unapologetic homers.

This is the part where I hesitate to mention that Wolf is also in the lead for worst voter of the week at the Pollspeak website. And he has an odd fascination with cheerleaders. But other than that, this guy is totally legit. 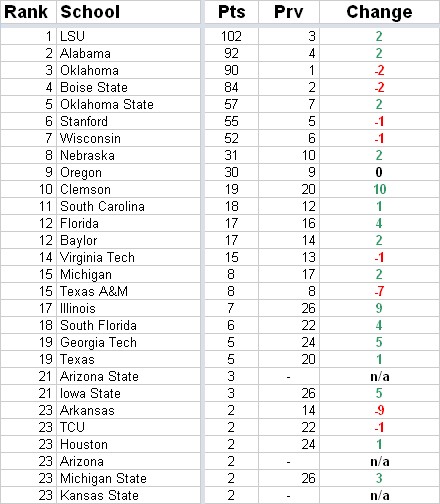 When it comes to polling, I think it's safe to say that the consensus among OBNUG Top 25 voters is that impressive wins over quality opponents trump all. This explains the two SEC teams at the top of the rankings despite our SEC-opposite bias and the Broncos being at No. 4 despite our BSU love affairs. Don't worry. We'll vote with our hearts and not our minds before this thing is said and done.

Abstained from voting due to washing their hair: OBNUG Intern, greekpadre.

What do you think of our Top 25 poll? See some ways that it can improve? Like, maybe putting Boise State at No. 1, for instance? Share your thoughts in the comments.