So what's the deal? Bronco coaches don't know, so I certainly don't know either. But join me after the jump for some ideas and an overview of how the Boise State run game is supposed to work. Your theories are welcome in the comments.

"I really don't know. We'll get that going at some point. We're going to continue to run the ball. Eventually things will pop.'' - Kellen Moore

"We've got to analyze that. I think this team is capable with the line that we have and the backs that we have. We need to run the ball better. We expect more (in the run game) and we will get better." - Coach Pete

Per Coach Pete: They will get better. And it probably won't be because they read this article.

Still, for fans who want to know just what in God's blue earth is going on around here, the following explanation of the Bronco running game might shed some light. I'll be building off a Bronco run game analysis I did two years ago.

The Boise State running game consists of five basic plays and then an exponential assortment of variety based on those five plays. Throw in formation, shifts, alignments, motion, and whatever other legal offensive chicanery you can think of, and suddenly your playsheet goes from five to 5,000.

What's going on here: All Bronco blockers move forward and block whoever comes into their path, hopefully not Billy Winn. Zone blocking lets the running back choose a hole, and hopefully there is one.

What's going on here: The guard pulls behind the center to wham the opposite defensive tackle. The center blocks the pulling guard's guy. The other guard goes upfield to find a linebacker or defensive back. Everyone wins (except the defensive tackle who was sure he would make the play on this one).

Play No. 3: The double pull

What's going on here: The center and playside guard pull around the end to block linebackers and defensive backs who wished they wouldn't have been in the way.

The double pull was what got Doug Martin his 33-yard touchdown on Saturday night. Boise State ran the play from the singleback formation with two receivers to the wide side of the field and tight end Kyle Efaw to the short side. The alignment gave the Broncos a numbers advantage to the playside, an advantage that worked out pretty good in their favor. 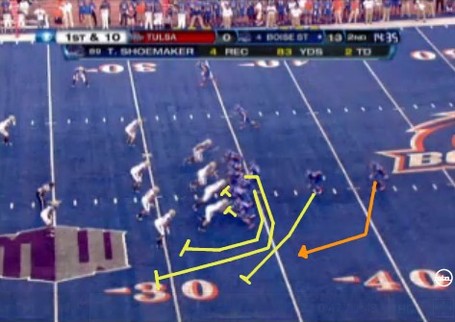 Play No. 4: The pulling guard

What's going on here: The backside guard pulls into the hole, and the running back follows. Simple, unless you weigh 300 pounds and have to pull.

Play No. 5: The reach block

What's going on here: A reach block is similar to the zone block in that you block the guy in front of you, only with a reach block you have to also get your body from one side of the defender to the other, reaching around him, if you will. For instance, if the play is going right and you have to block a guy who is on your right shoulder, you would need to reach block in order to seal the defender back to the inside.

Prior to the Tulsa game, offensive coordinator Brent Pease opened up about what was ailing the Bronco ground game through Weeks One and Two. Here is his diagnosis:

"The first game, there were men out there," Pease said. "Those guys were big. (Toledo) is a team that did a lot of line stunts up front and that's tough on our guys. ... They were smart - they didn't go for him shoulder pad to shoulder pad. They were going for his legs."

The problem against Georgia was that Georgia had some big guys. It's hard for anyone to gain rushing yards against a defensive line that weighs and resembles a sedan.

The problem against Toledo was line stunts, which are slanting, looping, confusing movements by defensive linemen after the snap. Here is one of Boise State's standard zone blocking plays:

Now here is what it looks like with line stunts:

It's not impossible to block, but it is certainly more difficult.

Other possible theories on what's wrong with the run game

Of Tulsa's 56 plays, probably 30 or 40 of them were the same two. One was a read option play that G.J. Kinne handed off every single time. The back took the handoff and ran outside or cut upfield if he saw a seam. The second play was play-action off the read option where a tight end would leak out into the flat. That was it. The entire gameplan probably fit on a napkin.

What is your analysis of the Boise State ground game? Any theories on how to fix it? Any questions on what these play diagrams mean and why they look like I photocopied them from an 1860's journal? Share your thoughts in the comments.