Share All sharing options for: Final pregame thoughts on Boise State versus Tulsa

The Broncos kick off their home schedule Saturday night (6:00 p.m. MT, CBS Sports Network) against Tulsa, a team that could really use a game against Memphis right about now. Instead, the Golden Hurricane get a Bronco team that wants to make a statement after their 40-15 "letdown" against Toledo. Wrong place, wrong time, Tulsa.

Join me after the jump as I go over some miscellaneous thoughts on the game and vent some fears and worries. Then feel free to add your Friday afternoon feelings in the comments.

Normally speed doesn't worry me, but this week I had flashbacks to Georgia's Brandon Boykin racing 80 yards untouched to the end zone in the season opener. Speed matters in a lot of ways - from the angles you take on defense to the assignments you need to make on offense. I don't expect Tulsa's turbo button to be the difference between winning and losing on Saturday, but I do expect it to be a factor in Boise State's gameplan.

Need tickets to the Tulsa game?

I would suggest avoiding the Southeast corner upper deck unless you have hundred dollar bills to burn.

Cheaper seats can be found elsewhere, like anywhere else. The Southeast end zone is nice, but unless those seats give you an unobstructed view of Valhalla, I'm not sure they're worth a grand a game.

That gives the Broncos a pretty good idea what to expect from the Hurricane's defense.

Boise State never found points and yards hard to come by during Guy's tenure at Utah State. The lowest Bronco output against the Aggies during that four-year span was 45. So welcome back, Brent Guy. Make yourself at home with that 4-3-Generous defense of yours.

Here are some links to posts that appeared on OBNUG over the last several days. There will not be a test later, so feel free to skim. 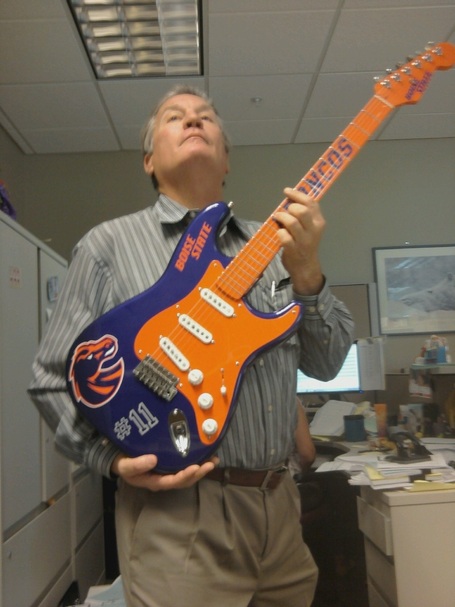 If you see it at the OBNUG tailgate on Saturday, play "Stairway to Heaven" on it for good luck.

The following are some Tulsa-based comments pulled from the hivemind of OBNUG readers.

From hatemay's keys to the game:

Limit Tulsa's young quarterback Kalen Henderson's big plays. He is young, but he runs well. It scares me that a young quarterback who is athletic, who can run well, who we have little film on is coming to Boise. Sound familiar?

"Win the turnover battle" was probably the key of the keys of the game last week with our D getting a couple of them inside the 10. Glad to see it show up as usual. Gladder if we are the winners of this battle again.

Rec'd for using the word "gladder," and rec'd for being right. Turnovers are one way that Tulsa can get into the game and Boise State can make it a laugher.

Not having Dan Paul is part of the problem with the running attack.

It certainly doesn't help. Coach Pease mentioned that Toledo was stunting on the defensive line, which can cause problems for linemen to pick up. So there's that, too. In short yardage situations, the lack of a true fullback is most glaring. You wonder if the Broncos would have called for the option on 3rd and 1 if there was a healthy fullback on the roster.