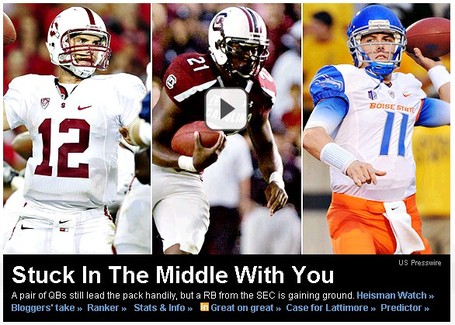 Everyone else seems to be doing it. Moore is No. 2 in ESPN's Heisman Watch behind Andrew Luck. He is dueling Marcus Lattimore over on the Yahoo site. Chadd Cripe found 10 real Heisman voters whose combined polls have Moore first. Quick! Someone cancel the rest of the college football season and let's vote now.

Pac-12 will not expand. Ask them again in two months.

Pac-12 commish Larry Scott cites Texas's inexorable greed as the reason why his conference will remain at 12 teams. In other fun news, Air Force and Navy are being considered for the Big East because ... uh, I don't have a reason. Just because. Feel free to talk about all this on the realignment open thread.

You drive that bus, Pat Forde

Bronco Nation's People's Champion was back at it in his Forde-Yard Dash column, giving Boise State credit for something no one has yet to give them credit for:

On the other end of the spectrum is Boise State, the only unbeaten that hasn't played a home game yet this season. Everyone loves taking shots at the Broncos' schedule, but you don't see any other big boys willing to wait until Sept. 24 to play at home. Bus.

Andy Staples puts Broncos at No. 6, compares them to Perseus

Happy birthday to Boise State running back D.J. Harper. May all your birthday wishes come true.