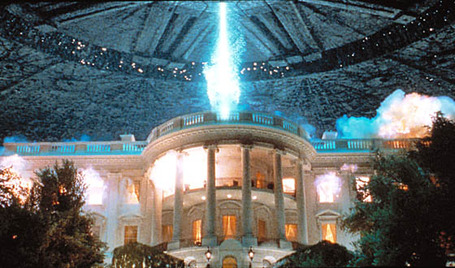 The White House in the above picture is college football. The alien warship shooting its alien laser represents an amalgam of realignment, money, TV contracts, good old boys, and the state of Texas. Will Smith, not pictured, is you. Conclusion: It's too late to save college football, but you still have that Men in Black thing going for you.

A lot has happened over the past couple days and a lot will happen over the next couple. Consider this your hitching post for realignment conversation. Share links, share theories, share memories. I'll do my best to update this thing with important news and answer any questions.

Question No. 1: What is going to happen to Boise State and the Mountain West (but mostly Boise State)?

Second things second, the Mountain West is preparing for some wild wheeling and dealing should things come to a head.

Craig Thompson has been in discussions with the Big East and Big 12 and Conference USA about contingency plans for his Mountain West conference to ensure that the MWC and its member institutions not get left in the dust. Here are some of his ideas:

The MWC-CUSA merger would be an ideal option if it would mean an automatic berth into the BCS. Dennis Dodd of CBS Sports explores that option in a blog post that says a lot without saying very much. The Orlando Sentinel says a lot more in this one sentence:

According to Sentinel sources, the BCS board of directors has suggested that to continue operating, it needs six automatic qualifying conferences.

If the Big 12 and Big East merge, that would leave only five AQ conferences, and the sixth might be the new MWC-CUSA.

Things we know for sure

But then the Big East remembers that air mattresses are the gateway drug to sex parties, and the whole thing gets called off.

P12 commish Larry Scott announced that Texas was not open to equal revenue sharing and therefore the Pac-12 was not open to Texas. Now we all get to do this superconference thing again in another two months.

The Big East considers Air Force and Navy, which would be a very Big East thing to do

Having lost Syracuse and Pitt to the ACC, the Big East needs football teams for its very fragile grip on an automatic BCS berth. Solution: Military schools. If you can't beat them on the field, make them feel guilty for not being willing to die for our freedom.