Top 25 analysis: Does Boise State no longer have to win pretty?

Share All sharing options for: Top 25 analysis: Does Boise State no longer have to win pretty?

The onus of winning pretty has been on Boise State for years. As the saying goes, "If you can't beat Utah State by 50, then have you really beat Utah State?"

Well, the times may be a-changing if this week's college football rankings are any indication. The Broncos remained at No. 4 after a 25-point win over Toledo on Friday night in a game many fans expected to be a 35-point win or better. And the punishment for only winning by four scores on the road? Nothing.

What a relief, though. Boise State may finally be at that place among voters where their every performance is not judged on style points but rather on winning and losing. It is easy to point out reasons why Friday night's win in Toledo was a challenge (road game, good Toledo team, etc.); it just seems like no one ever listens.

Well maybe things are changing. It's nice knowing that Boise State doesn't have to beat a Wyoming or UNLV by 50 points simply to hold steady in the polls. That said, I'd still like to beat Wyoming and UNLV by 50. Sounds fun. 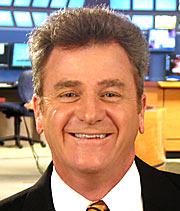 Guess which two Mountain West teams Mr. Wogan has ranked? I'll give you a hint: Boise State is one of them and TCU is not the other one.

Wogan has the San Diego State Aztecs as the 22nd-best team in the nation, rising from the ranks of Wogan's unranked this week following a win over mighty Washington State. Wogan is not only drinking the Kool-Aid on the Aztecs, he is hawking it on street corners and renting space at farmer's markets. This guy is ahead of the curve.

That said, it sure would be nice if San Diego State would be ranked when the Broncos play them in November. Keep up the weird, crazy work, Jim.

Sidenote: Jon Wilner is still being Jon Wilner. Look at all these extreme votes. 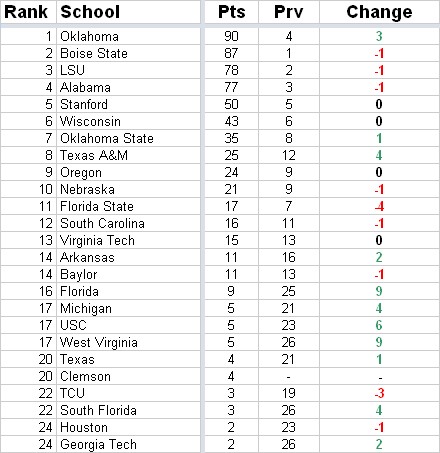 The Broncos are no longer the No. 1 team in our poll put together by Bronco fans, so obviously we're doing something wrong. Solution: More blind homerism, less respect for ACC opponents.

The Sooners beating the Seminoles gave Oklahoma its big boost, and the other high risers were Florida, West Virginia, and Texas A&M, the latter of which beat Idaho by 30 points. The Vandals have Fresno State this week, so I wouldn't be surprised if the Bulldog got some votes in the Week Five poll. I can be bough pretty easily.

Abstained from voting due to washing their hair: OBNUG Intern, Nate Peters, mikrino.

Do you see some areas where the OBNUG Poll can improve? Weigh in with your thoughts in the comments, and I'll make eleventh hour changes before the poll goes final.