Kellen Moore had one of those magical games against Toledo, the type in which Toledo defenders swear Moore had to be using actual magic because how else could you throw a football so well. Moore ended the night with five touchdown passes, courtesy of five great plays - a zone buster, a timely screen, a bizarro go route, play-action perfection, and whatever that Tyler Shoemaker fade was.

Join me after the jump for a breakdown of each, and feel free to share your analysis and questions in the comments.

Between drawing unfortunate telestrator anatomy and breaking down the Toledo touchdown cannon operation, ESPN analyst Rod Gilmore helped explain some of what was going on in Kellen Moore's tour de force against the Toledo secondary. On the first touchdown pass from Moore to Shoemaker, Gilmore said that Moore fit the ball in between the safety and the corner. Correct. Now let me show the work.

Toledo was playing Cover 3 defense, which I have diagrammed below. Cover 3 splits the deep half of the field into thirds with a defender responsible for each third. The corners play the outside thirds, and a safety plays the middle third. The extra safety and the linebackers play a combination of underneath zones. 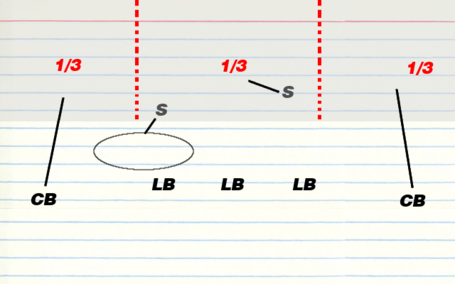 One way to attack this defense is to pressure the deep safety by running multiple routes into his zone. The goal is that he chooses the wrong receiver (or panics and hyperventilates). Here is Boise State's play. 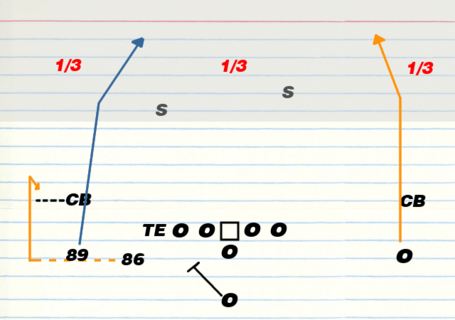 In the realm of Boise State touchdown plays, this one is rather simple on the surface, but it works because of a two hugely important factors.

The first is tight end Kyle Sosnowski (86) going in motion from right to left, stopping outside Tyler Shoemaker (89). The corner follows Sosnowski outside, which creates more space for Shoemaker. Before the ball is even snapped, Shoemaker has the corner easily beat to the inside.

Here's the before shot. Note the corner at the bottom of the screen and how well-positioned he is. 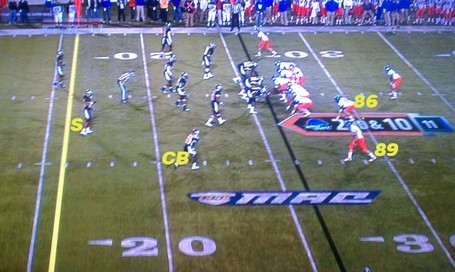 And here's the after shot. Note the corner and how out-of-position he is, mostly obscured by the Buffalo Bills injury report. 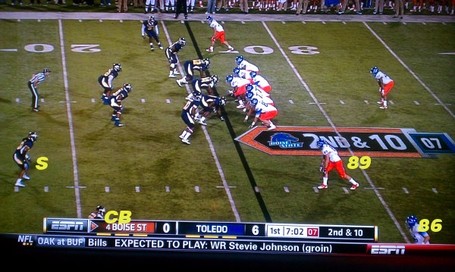 The second factor in this play occurs after the snap. Kellen Moore pump fakes to the receiver on the right who is running a deep seam route. That pump fake freezes the middle safety who gets stuck between defending the two Boise State receivers running deep routes into his zone. The pump by Moore and the hesitation by the safety provides more space for Shoemaker and gives Moore just enough room to fit in the deep ball.

Screen plays are an obsession of mine, I think because I was never allowed to run them in high school football. I was not the most agile 150-pound center.

So I love seeing screen plays that work. Moore's screen pass to Doug Martin was the perfect call at the perfect time. Rumor has it this play was an audible by Moore when he saw that the blitz would be coming from his left. I'm not sure it was an audible or just a really convenient play call. The best time to throw a screen is when the other team is blitzing (there will be fewer defenders behind the ball to make a play), and the best advice against a blitz is to throw it where the blitzer came from. It was the Perfect Storm, minus George Clooney. 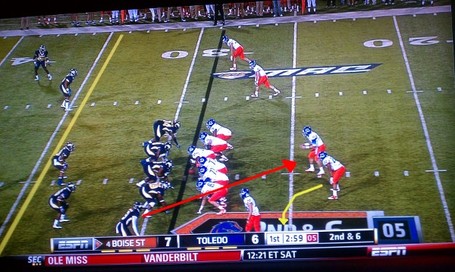 Here is the play diagram, if you're interested. It is pretty standard screen stuff with Thomas Byrd and Spencer Gerke getting downfield to block alongside Gabe Linehan (87) and Mitch Burroughs (20). Byrd did a nice job peeling back to pick off a trailing defensive lineman who had read the screen. More often now, offenses design screens with a blocker turning around to take any defenders who got wise to the playcall. 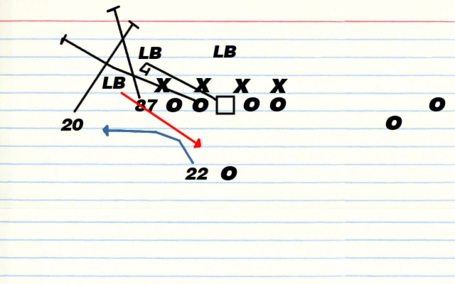 Not a whole lot going on here. Everyone blocks, Tyler Shoemaker goes to the corner, Kellen Moore throws it real high-like.

Offensive coordinator Brent Pease opened the secret compartment in the playbook for this one. 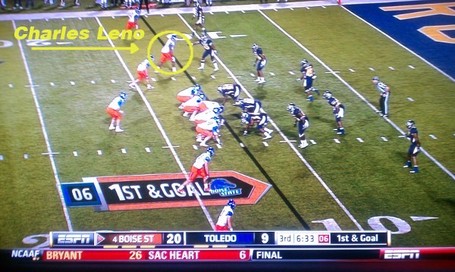 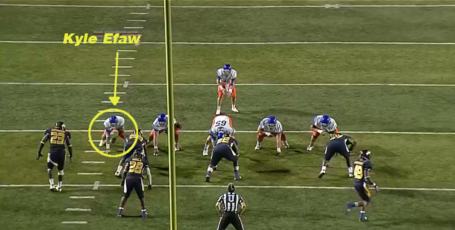 You're not taking crazy pills. That's really Charles Leno (78) in the slot and Kyle Efaw (80) at right tackle.

The formation is perfect legal, too. In college football, you cannot have more than four players in the backfield, and in this formation, the Broncos have three wideouts and Moore (Doug Martin looks like he might be in the backfield in the screengrab above, but he may have checked with the linesman on his side to confirm he was lined up on the line). One fun aspect of this formation to stick in your noodle is that some day the Broncos could throw a quick screen out to Martin who would have giant person Leno blocking for him.

Not only did Boise State have a unique formation but Toledo also did the Broncos a favor and blitzed two players right over the top of Efaw. Easy touchdown (says me who cannot consistently throw a spiral). 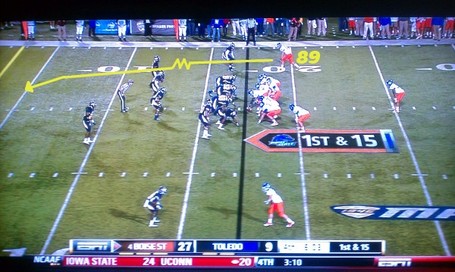 Moore's final TD of the night was a play-action pass to Shoemaker that could have won an ensemble Emmy. The play was incredibly similar to Shoemaker's TD grab against Georgia near the goalline. What sells the play is the way Boise State sells the run. Kellen Moore is a play-action wizard, and to make matters even tougher on the defense, Shoemaker comes off the line and pretends to block. After miming a few blocking moves (note: don't ever call them "blocking moves"), Shoemaker takes off for the end zone, and Moore finds him.

The play-action helps hold the safeties in place (if they had deep zone responsibilities) and Shoemaker's route makes it almost impossible for a corner to defend one-on-one. Toledo, in what was a running theme for the night, never had a chance.

What did you pick up in watching the Boise State - Toledo game? What questions do you have about Cover-3 or other strategies? Share your thoughts and questions in the comments.