Share All sharing options for: Game balls for Boise State versus Toledo

Boise State earned a hard-fought road win and Kellen Moore earned fantasy starts for life from Rod Gilmore and Joe Tessitore in the Broncos' 40-15 victory over Toledo on Friday night. What players, plays, and performances stood out? I hand out game balls to some deserving candidates, and I invite you to dish out your own awards in the comments. Is Kellen Moore to game balls like Modern Family is to the Emmys? Always. Hit the jump for more.

Moore won this award in a landslide, possibly because he was the only option I listed on the postgame poll but more likely because he was quarterbacking like a Greek god on Friday night. Moore was on the money more often than he has been in his entire career, completing a career-high 32 passes to nine different receivers. I joked after the game that Toledo's defensive gameplan was to let Kellen Moore beat them. All joking aside, I'm pretty sure that was their actual gameplan. Sure, they held Doug Martin to 3.7 yards per carry, but that's kind of like turning off a faucet when you're standing in a rainstorm. Toledo still got really wet. 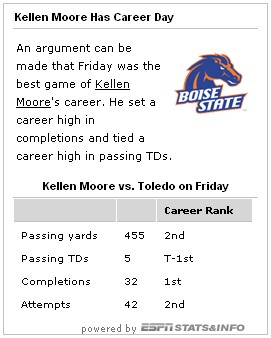 In the pantheon of Moore passing days, the Toledo game ranks right up there with Moore's 2010 Hawaii performance where he threw for 500 yards. Take away a couple early drops by Bronco receivers, and his Friday night numbers could have been even better.

Gameball for play of the game

There is a movie called Sliding Doors about a Gwyneth Paltrow lady whose life takes two different paths based on whether or not she catches a train. We movie watchers get to see both lives, which is kind of trippy but not too trippy because it's ultimately a chick flick. Point being, Chase Baker's INT moment was a Sliding Doors moment. We got to see the happily-ever-after side with Boise State stopping a Toledo drive that could have cut the score to seven, taking the turnover and driving downfield for a touchdown, and sitting in the catbird seat the rest of the way. We did not get to see the side where Toledo scores and Bronco fans rend their clothing and Gwyneth Paltrow never finds love. Good thing because that side is a downer. 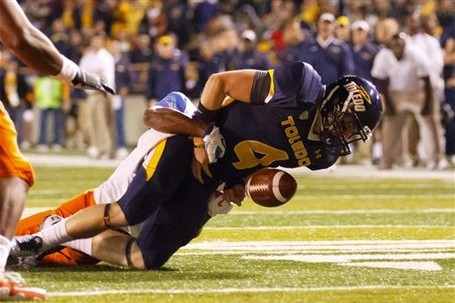 Gameball for best play by a Dutch person

Amsterdam Ced came up huge for Boise State with Toledo again driving to cut into the Bronco lead (following a Moore interception that I have scrubbed from my mind). The less athletic half of Toledo's quarterback duo, Austin Dantin thought he was putting a juke on Febis, kind of like how deer think you can't see them if they stand really still. The juke didn't work, Febis wrapped Dantin and pulled the ball free, and J.C. Percy recovered to squash Toledo's fleeting momentum.

On a related note: Worst play by a Dutch person goes to Austin Dantin, assuming Dantin is Dutch.

Fanbase least committed to being upset

On multiple hilarious occasions, ESPN cameras found Toledo fans in agonizing grief and/or white-hot rage ... until they realized they were on camera. Then the Rocket fans were just fine thanks.

Miracle of the game

Boise State's defensive line not really being a factor

Apart from Chase Baker's game-changing interception on Shea McClellin's game-changing batted ball, the Bronco defensive line recorded one sack before garbage time and nary any pressure. Credit Tim Beckman for having a gameplan that essentially boiled down to "Get the ball out as fast as you can! Save yourself!" It worked. Everyone lived.

The one to Matt Miller just before half

Oh, what's that? The refs didn't notice that Miller broke the plane of the end zone twice? OK, then. I'll go with the Doug Martin 71-yard screen pass. That one was pretty good, too.

Comedy of errors of the night

And now a recap of Friday night's placekicking:

Toledo and Boise State combined for four missed extra points - one by way of bad snap/hold and three more by way of sideways kicking. The Broncos tried out both Michael Frisina (wide left) and Dan Goodale (wider left) who are competing for the starting placekicker job. Guess they're still neck-and-neck, huh?

The Toledo receiver-returner extraordinaire finished with eight catches for 69 yards, six kickoff returns for a 17-yard average, and zero punt returns. He was not a factor, and had I not spent the past couple weeks worrying about him, I would have thought RB Adonis Thomas or QB Terrance Owens were the Rocket's biggest playmakers. Good job, Bronco defense and Brad Elkin.

What players, plays, and performances do you think deserve game balls? What did you notice on Friday night that hasn't been mentioned? Share your thoughts in the comments.