Share All sharing options for: Know your enemy: Toledo edition

Well, it looks like we survived the bye week. Congratulations are in order.

The Broncos take on the Rockets in a rematch of last season's lopsided Boise State win. Toledo has considerably more confidence this year and are sky-high after a moral victory over in-state bully Ohio State. Whether UT can hang or not will be determined tomorrow evening, but in the meantime there's trivialities to be memorized! It's time again to know your enemy, everybody! Take good notes.

10) The area now known as Toledo, Ohio was first settled in 1794 as Fort Industry, but all but abandoned during the War of 1812 (a war—to the best of my knowledge—that  occurred in or around 1812). About 5 years later, the area was re-settled when a Cincinnati syndicate purchased some prime real estate (with beads, furs, and wenches no doubt) at the mouth of Swan Creek and named it Port Lawrence. Later, another syndicate (syndicate fight!) purchased a different tract of land and named it Vistula. To better compete with other small bergs vying to be the end terminus of the under-construction Erie Canal, the two towns merged in 1833—Toledo was born...sort of.

The town was nameless and filled with smelly "Canal folk" until a local merchant by the name of WIllard Daniels suggested the name "Toledo" as it was "easy to pronounce, pleasant in sound, wouldn't share the name with any town on the American continent". Daniels lobbying was key and "Toledo" was chosen by the citizenry over the equally easy to pronounce, pleasant sounding, and unique to the American continent suggestion: "Diarrhea".

9) The University of Toledo was founded in 1872 after receiving an endowment from a wide-eyed dreamer and pamphlet publisher named Jesup Scott. Scott's pamphlet opus—panned by critics as "too predictable"—was titled Toledo: Future Great City of the World and in it, he predicted that Toledo would be the center of world commerce by the year 1900. Derisive snickering can still be heard to this day. Scott's other successful pamphlets were: Hoboken, New Jersey: Land of Enchantment, Waukegan: Modern Day Atlantis, and Detroit: One Thousand Years of Prosperity. 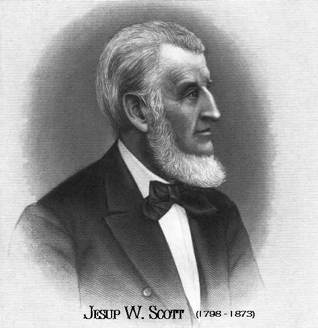 8) Toledo played their first game of collegiate football in 1917 under coach John "Which way's the goal line" Brandeberry. Brandeberry's squad could have been the inspiration for the movie "Little Giants", that is, if that movie had ended with Rick Moranis being brutally killed. Brandeberry's squad not only went 0-3 on the year, but failed to score even one point against such powerhouses as Detroit, Findlay, and Ohio Northern. The following year, Brandeberry was replaced by James "Even Steven" Baxter, who got the fledgling club back to respectability by posting a 1-1-0 record.

But what of Brandeberry? Legend has it, he received a restraining order signed by president Woodrow Wilson himself, declaring that he wasn't to come within 100 yards of a football field in the state of Ohio. Upon receiving said document, Brandeberry quipped, "what's a football field?"

7) Toledo's oldest and bitterest rival is none other than MAC conference mate Bowling Green, whom they've played 75 times since 1919—winning 32 of the contests to 39 losses. The two squads, just 20 miles apart, compete yearly for the coveted "Peace Pipe", in what many wordsmiths have dubbed "the Battle of 1-75". The current iteration of the peace pipe trophy has been around since 1980, but the original peace pipe was just that, a six-foot, fully-smokeable indian relic that was given the "puff, puff, pass" treatment at half-time of the BGSU/Toledo basketball contest starting in 1948 (when smoking at halftime was akin to drinking Gatorade). In 1953, a small placard was added to the old pipe, saying simply "No Bogarting".

6) The Rockets play their home football games at the 26,000 seat "Glass Bowl" stadium—slogan, "you break it, you bought it." The stadium was built in 1936 and the wildly creative administration originally dubbed it "University Stadium". In 1946, aided by the cities numerous glass manufacturers, the stadium was renovated and given many new glass accoutrements (the blown glass helmets only lasted one season)—the Glass Bowl moniker has stuck ever since.

5) The most schizophrenic coach in Toledo history has to be Frank X. Lauterbur, who coached the Rockets from 1963–1970. Lauterbur was likely on the cusp of getting canned after averaging less than 3 wins per season over his first 4 years before he somehow squeezed 9 wins out of his 1967 squad. The following year, however, it was more Lauterball...as he managed to barely get above .500. Then, a really strange thing happened—Lauterbur's squad didn't lose a single game for two straight seasons and climbed as high as #12 in the AP in 1970. Like most coaches with a hot hand, Lauterbur was headhunted by Iowa...but whatever deal with the devil he made in '69 and '70 was non-transferable—he managed just 4 wins in 3 years with the Hawkeyes and was summarily canned. All told, the Rockets pieced together 3 straight undefeated seasons between 1969 and 1971, finally having their win streak snapped by Tampa in the 1972 opener. 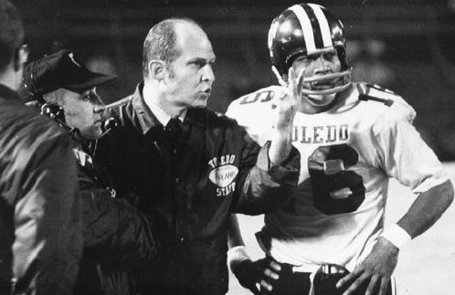 "Alright, heads we're good...tails we suck—call it in the air."

4) NFL Hall of Famer Emlen Tunnell once played for the Rockets. Tunnell was with the Toledo squad prior to 1946 but suffered a broken neck while playing and, with a desire to fight in World War II, hung up his cleats. The Navy's stringent "no broken necks" rule prevented him from enlisting, but the U.S. Coast Guard gave him a break (no pun intended) and he served in that capacity until deciding to play ball again for the University of Iowa. Tunnell was undrafted, but landed with the Giants anyway (their first African American player in franchise history) and ended up a 9-time Pro Bowler with New York and Green Bay. 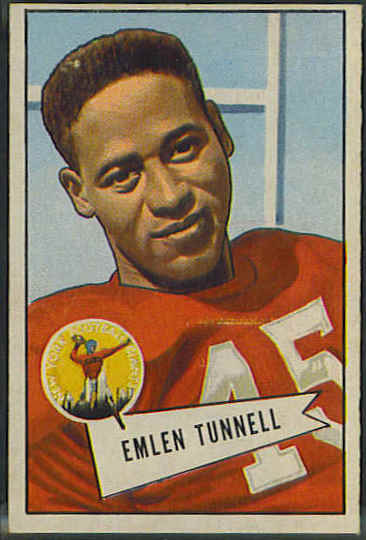 3) Noted chemist Frederic John Bauer is a University of Toledo alum. Bauer never cured any diseases or discovered unknown elements, however. Oh no...he actually did something important. He designed and patented the Pringles can. Legend has it that Bauer was working long hours in the lab trying to crack the potato chip matrix when he slipped on a discarded Penn tennis ball can. He hit his head on the side of his desk and when he woke up, he not only sketched out a schematic of the flux capacitor, but had changed snack packaging forever.

2) Actor Jamie Farr, as well as his M*A*S*H character Maxwell Klinger both hail from Toledo. In 2007, redistricting left Farr's nose a resident of Birmingham, while the rest of his face still resided in Toledo proper. 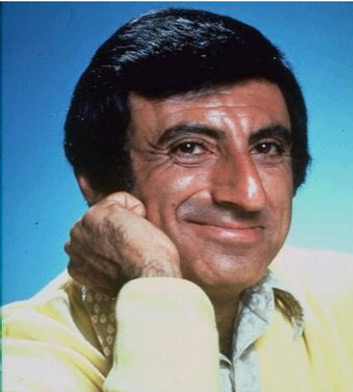 ...because his nose is large, you see.

1) Toledo's official mascot, "Rocky the Rocket", was created in 1967, and is not—as you might expect— a flying squirrel. The mascot has gone through many iterations in the last 40+ years including an androgynous inflatable version that came on the scene in 2002 and whose cold, dead eyes spawned a thousand nightmares. 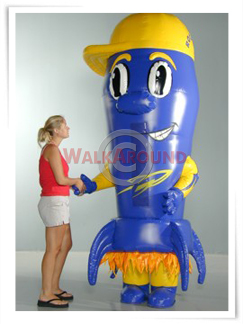 "Please sir or madam, may I have my soul back?"

Most recently, Rocketman Rocky, a Tron/Power Ranger mashup has been the mascot of note. The visor precludes us from seeing who's inside the getup, but I have a hunch it's Jamie Farr. 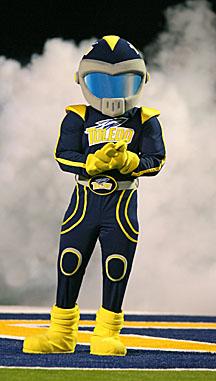