After the latest Best Win In Program History, the Broncos regroup for a Friday night showdown at Toledo (6:00 p.m. MT, ESPN) with a new-look depth chart. Gone are the three eligibility-challenged Dutch players, in is Travis Stanaway and a cast of a few. Join me after the jump for a look at the changes and a look ahead at what it might mean. As always, share your thoughts in the comments.

Disclaimer: Depth charts mean as much as you want them to mean. Keep in mind that things change over the course of a game week and that game situations, injuries, and performance will render some of this depth chart moot. Still, it's fun to speculate ... with hyperbole! The NCAA hates foreigners! 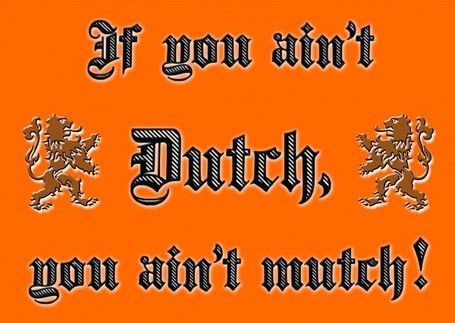 The most notable changes on this week's version of the depth chart are the exclusions of Boise State's three Dutch players who are currently on the shelf due to eligibility concerns. With the Dutch in limbo, Matt Miller takes the starting job at wideout, Travis Stanaway the starting job at safety, and Darren Koontz the backup job at defensive tackle.

Now, about this whole Dutch imbroglio, I think I speak for everyone when I ask, "What is going on here?!"

Follow-up questions: Why now? What did they do wrong? Will wins be vacated? Will the players play again this season? Are we just jealous that Amsterdam gets three months of paid holiday every year? Of course, there have been no answers to any of these questions, which is one of the most frustrating parts of all. As Boise State has blossomed into a Top 25 program, there have been growing pains, not the least of which has been communication with fans and media. This is a perfect example. Something huge went down. Nothing is being shared about it. If I may put on my peer counseling hat for a moment, "So what I hear you saying, Boise State, is that you do not value my devotion as a fan." We need couples therapy.

And now a message from the NCAA:

An open letter to the Mitch Burroughs Experience

I have poked fun at your expense over the past few seasons, but I would like you to know that there will be no more poking fun. You proved yourself in the Georgia game to be a receiving threat, Perretta-esque even. From here on out, you will be one of my 83 favorite Bronco players and all teasing will be passed on to punter Brad Elkin.

An open letter to Brad Elkin

It was brought to my attention that you had a really good game against Georgia. My apologies for any ribbing that may have occurred over the past several seasons, up to and including the paragraph above.

Travis Stanaway > Jeremy Ioane, for this week at least

It should be noted that neither of Georgia's long touchdown passes were the fault of the Febis-less safety position. Bronco coaches maintained after the game that the TDs were all on the Boise State corners (presumably, Jamar Taylor).

Jeremy (Ioane) and Travis (Stanaway) were not the issue. Our corner was the issue. Had some communication issues. We've got to get that corrected.

BTW in all this I think "the Dutch Issue' sounds like a Jason Bourne movie Cc: @IDS_BroncoBeatless than a minute ago via TweetDeck

Jarrell Root no longer listed as co-starter at both DE positions. Speculate.

Tyler Horn shows up as a backup at defensive end this week, which is an ever-so-slight departure to the way the depth chart unfolded for the Georgia game. Is this a sign that the Heavy 3-4 (outlined here) was a one-off? Probably not, but I can imagine Boise State going with a different look to face Toledo's much different personnel. The Rockets are not the Bulldogs, so it makes sense not to defend both teams the same way.

And your fourth defensive tackle is ... Darren Koontz

I was anxious to see who Boise State would choose to replace Ricky Tjong-A-Tjoe, more anxious than I probably needed to be considering the Broncos only rotated three defensive tackles all game against Georgia. Koontz beat out Greg Grimes for the backup role.

And now a word about Charles Leno, Jake Broyles, and Spencer Gerke

It's not quite Holyfield-Tyson unless things start getting weird, but the Michael Frisina - Dan Goodale kicking battle continues to be quite the story as the season progresses. Boise State still hasn't decided on an official kicker. Goodale handled the extra points against Georgia and was warming up on the sidelines for potential field goals that (thankfully) never came. I would give Goodale the edge with the obvious caveat that I know nothing.

Redshirts for linebacker Blake Renaud, wide receiver Dallas Burroughs, and defensive end Tyler Horn were burned hard and fast two Saturdays ago against Georgia. Next on the watch list: RB Jay Ajayi and S Lee Hightower. Ajayi wears No. 27 and Hightower wears No. 29, so if you see either of those guys on the field Friday, send me a text.

What do you make of this week's depth chart? Do you have a take on the Dutch situation? Should Bronco coaches give Mike Atkinson some carries at fullback this week? Share your thoughts in the comments.