Top 25 analysis: Wondering what could have been for Boise State's strength of schedule

Share All sharing options for: Top 25 analysis: Wondering what could have been for Boise State's strength of schedule

We Bronco fans had a weekend off to scoreboard-watch and bandwagon hop last weekend, and we almost had ourselves quite the time. Almost.

Instead of numerous upsets by numerous Boise State opponents, the Broncos' strength of schedule got skunked. Of course, the silly part of strength of schedule is that it really only cares about Ls and Ws and not about how Team A outplayed Team B at the Horseshoe in Columbus, Ohio. Close doesn't count, which is a bummer.

Now you and I and Bronco coaches know that the results of these games will tell a lot about the quality of future (and past) opponents. But do the polls see this? Nope.

Still, Boise State got a boost from TCU (which rose to No. 23 in the rankings) and a few good voters thought the Broncos worthy of jumping cupcake-scheduling Florida State. Maybe times are a-changing. Or maybe I'm delirious from throwing things at my TV all weekend. Who knows?

SB Nation poll widgets are down for now. Go ahead and use the ESPN link above.

Schoffel has the Broncos at No. 10, which is a full three spots lower than anyone else in America put Boise State. What teams does Schoffel think are better than BSU? Better hang on to your goatees:

In much saner news, last week's worst voter Andy Staples moved the idle Broncos from No. 12 to No. 7. So there is hope for Schoffel yet. 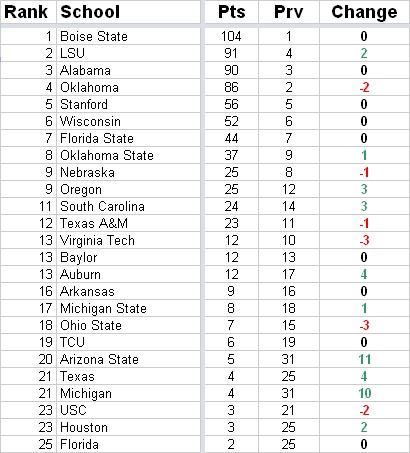 Boise State holds the top spot for the third week in a row, and I have a hard time seeing the Broncos giving it up any time soon. So long as Boise State keeps winning, we have every reason to let our homer flags fly. As is the case in the major polls, the OBNUG poll sees college football as a four-team town with the Broncos, Oklahoma, LSU, and Alabama as the cream of the crop and everyone else as slightly better than Idaho.

Meet your OBNUG poll voters, and guffaw in delight at how foolishly you think they voted.

Abstained from voting due to washing their hair: reflectivity.

OBNUG is proud to be part of the BlogPoll and humble enough to admit that our poll probably could use some fine-tuning. Do the fine-tuning in the comments, correct our obvious biases, make your voice heard. Share your thoughts in the comments.