The Boise State defense and coordinator Pete Kwiatkowski threw a surprise party for the Georgia Bulldogs two Saturdays ago, giving quarterback Aaron Murray a variety of different looks and debuting a pair of new formations for future opponents to sweat out. Join me after the jump for a breakdown of the new looks, some rudimentary photoshops, and analysis. Questions? Feel free to ask them in the comments.

Here is a snapshot of a traditional 3-4 defense with three down linemen and four linebackers: 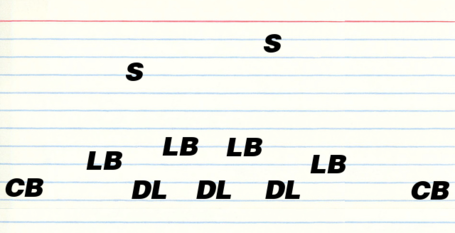 Now, feast your eyes on the version that Dr. Frankenkowski and the Boise State defense dreamed up: 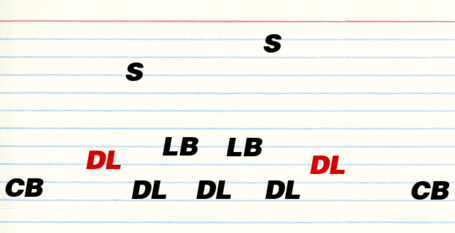 The Broncos replaced the two outside linebackers with defensive linemen, which helped in a number of ways, not the least of which was adding some size to the front seven. The formation is very close to a 5-2 if the outside defensive linemen were to play with their hand on the ground. Boise State played those outside lineman standing up, which gave it the 3-4 look. Plus, the outside guys can play the run, rush the passer, and drop into coverage just like a 3-4 outside linebacker should. If you need a real-world example, think the Steelers or the Packers and the outside guys would be your Clay Matthewses and your James Harrisons. Probably do not think about the 49ers. You will not know any of those guys. 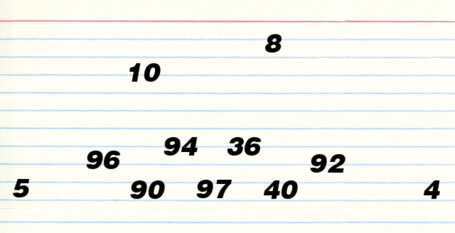 You'll notice that three Boise State defensive ends get to play in this formation (No. 96 Jarrell Root, No. 40 Tyrone Crawford, and No. 92 Shea McClellin), so it makes sense why Root has been listed as a co-starter throughout Fall Camp. Essentially, the Broncos have swapped Root for the nickelbacker and added about 50 pounds to the front seven in the process. That's like a large microwave. Or a three-year-old.

The Broncos opened the game in this formation and stuffed Georgia running back Richard Samuel for a two-yard gain on the game's first play. Boise State would use this formation often on run downs (1st and 10, 2nd and short) and to great success. A note of exoneration: This formation was not responsible for that 80-yard touchdown run.

On 3rd and long and other obvious passing downs, the Broncos switched to this hybrid nickel formation, subbing out the middle linebacker and replacing him with corner Quaylon Ewing-Burton. Then things just got weird from there. 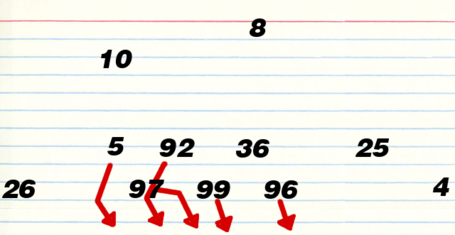 No. 5 is Jamar Taylor, the team's best cornerback who, in this formation, is playing the role of a blitzing linebacker. Next to him at middle linebacker: defensive end Shea McClellin, also blitzing. What sort of salsa-induced dream led Kwiatkowski to scheme this one up? And where can I get some of that salsa?

Here is a screenshot of the formation in action during a third quarter Aaron Murray takedown (end result pictured at the very top of this post).

The people are a blur because they are running so fast and because my screen-capture software isn't the best.

The personnel I included in the diagram is the same personnel from this play, but you would think the Broncos can and will fiddle around with the pieces and parts. Picture Billy Winn at defensive end, looping inside the blitzing Taylor and McClellin. Seriously, Toledo, picture it. It's probably going to happen.

Here is the play art from Boise State's first touchdown of the game. 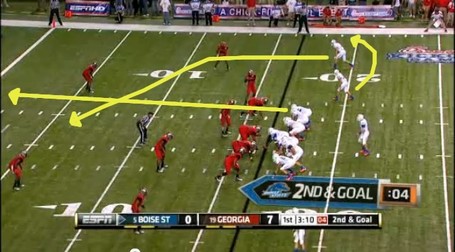 There are several keys to this play, including one I didn't highlight: Chris Potter's motion out of the backfield. Potter began beside Kellen Moore and motioned to the left of the formation, causing the Georgia defense to shift and open up space on Boise State's right. The go route from tight end Kyle Efaw cleared space for Matt Miller to work underneath, and the swing pass action from slot receiver Mitch Burroughs drew defenders to the outside. I don't know about you, but I think this is pure art. Clear out some of that existential stuff from the Boise Art Museum and make room for this play.

Did any of this make sense? Got some questions about these formations or football in general? This is the place to share them. Leave your thoughts in the comments.