Share All sharing options for: Know your enemy: Georgia edition

We are a mere 2 days away from the much-hyped battle in the Georgia Dome and you've basically seen the match up analyzed from all angles (even obtuse ones). Well, that's all well and good, but 'round these parts game week isn't over until we've analyzed the trivial, minute, and irrelevant parts of our opponents. It's called "know your enemy" and it is my Super Bowl. Take notes.

10) Georgia played their first football game in 1891, just a year after Idaho's statehood, with a mustachioed and be-sweatered group comprised of what looks to be several adolescents and apparently several intrepid 40-somethings. 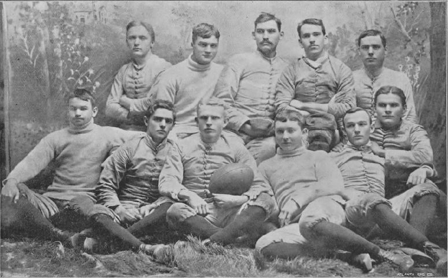 They went 1-1 on the "season" with a 50-0 beating of Mercer to kick things off and then fell 10-0 at the hands of Auburn about 3 weeks later. Their coach in their inaugural season was this intellectual looking fellow, Dr. Charles Herty: 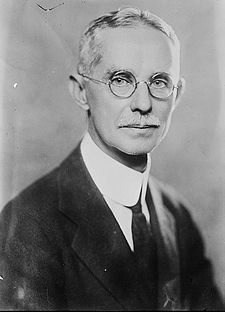 Herty's real claim to fame was not the creation of the Bulldog gridiron squad, however. No, Herty aspired to much loftier heights when he developed the "Herty System" of collecting pine resin for the production of turpentine. Herty later parlayed his resin-collecting successes into the Herty Turpentine Cup Company in 1909—hello ladies! Herty was posthumously inducted into the Paper Hall of Fame (don't visit during windstorms) and also lent his surname to a Naval Ship, a Forestry Institute, a town in Texas and an elementary school (go Fightin' TurpCups!).

9) Possibly the most famous coach in Georgia's storied history (no, not Branch Bocock) was Glenn Scobey Warner—known to the masses as Pop Warner. Georgia was Warner's second coaching stop after kicking off his career at Iowa State in 1895 (going a rather ho-hum 3-5, mind you) and he left after just one perfect 4-0 season, but his legacy lives on today. With stints at Carlisle Indian School, Cornell, Pitt, Stanford, and Temple and 4 national championships (3 with Pitt, 1 with Stanford), Warner was a true innovator of the game—credited with the development of—among other things—shoulder pads, the screen pass, the single- and double-wing formations, and the spiral punt. Possibly the biggest legacy of Pop Warner's career (besides the spiral punt) was the creation of the first youth football program in the country, Pop Warner Little Scholars—now known as simply as "Pop Warner". To this day, the Pop Warner football program is the only youth sports program with an academic requirement, churning out tomorrow's spiral punters and Charles Hertys every single year. 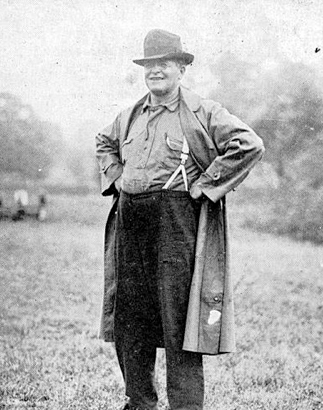 8) The Bulldog football program play their home games not at the "neutral site" Georgia Dome, but at the 92,000 seat Sanford Stadium, which is either named after a crotchety (and weak-hearted) junk yard owner or Dr. Steadman Vincent Sanford, the president of the university from 1932 to 1935. Dr. Stanford was the faculty chairman of UGA athletics from 1907 until he assumed the presidency and because he oversaw the football field moving from, you guessed it, Herty Field, to a central campus location, the 30,000 seat stadium was named in his honor. The first game ever played at the newly minted venue was against Yale on October 12, 1929, where the Bulldogs upset the heavily-favored, and heavily-ascotted Yale team. That day is still known in Yale lore as "the day the muzak died". 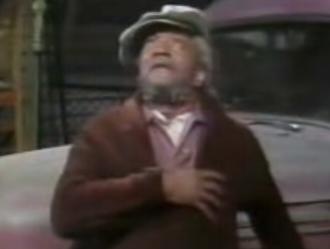 "You hear that, Elizabeth? Sanford Stadium is named after a scholar and administrator."

7) The Georgia football program has produced two Heisman winners in its history. You probably already know about wunderkind, and all-time leading rusher Herschel Walker, but you might not know about the first Bulldog recipient, Halfback Frank Sinkwich. Frank Sinkwich, whom I would have named "the Croatian Cruiser" had I been born as Grantland Rice, led the nation in rushing in 1941 and was voted "Athlete of the Year" by the Associated Press in 1942 (over Ted Williams, who won baseball's triple crown that year). After taking home the coveted Heisman trophy in that same year, Sinkwich joined the Marines, only to be ostensibly labeled "4F" on account of the ear due to having flat feet. Somehow the Detroit Lions were able to look past Sinkwich's flat feet as they selected him in the 1943 NFL Draft—he was NFL MVP within a year, beating out, among others a by-then incredulous Ted Williams. 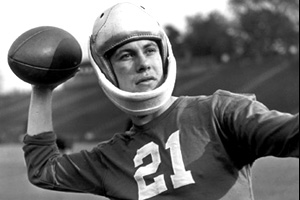 Sinkwich wearing a helmet on loan from Russian cosmonauts.

6) In 1913, Georgia showed their disdain for Presbyterians by trouncing Alabama Prebyterian 108-0—not a Georgia Tech–Cumberland beatdown, mind you...but impressive in it's own right. The Bill "Bloodlust" Cunningham led squad started the season with 3-straight shutouts in fact, scoring 179 points before giving up 13 in a losing effort against Virginia (Virginia?). The team recorded shutouts in half of their games that year, finishing 6-2 and even notching a win over rival Georgia Tech, just 3 years prior to their molestation of Cumberland. To this day, a Presbyterian chapel stands on Georgia's Athens campus, with a statue of coach Bill Cunningham facing it's front entrance giving visitors the finger. 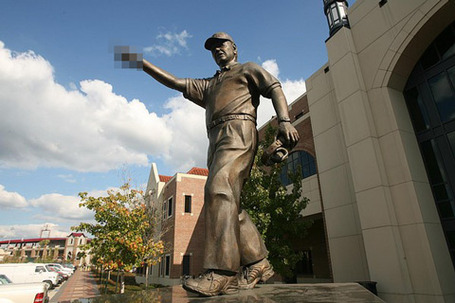 5) Some erroneously think that the Green Bay Packers swiped the Bulldogs logo, since Georgia had been playing football for about 40 years when the Packers organization came into existence. Not so. Green Bay owns the copyright on the "G" logo and allows Georgia and Grambling State to use it. Coach Vince Dooley actually "created" the "Georgia G" in 1964, 3 years after Packer equipment manager Gerald Braisher drew up the original. Ahh, the '60s...the golden age of non-litigiousness— a simpler time when schools and organizations wouldn't threaten good-standing fanblogs for use of their PANTONE© colors. Of course, I'm speaking metaphorically.

Frankly, I don't see the similarity.

4) UGA's home—Athens, Georgia—actually sprung up around the university and not the other way around. The current site of the university was once known as Cedar Shoals, until the Georgia General Assembly granted a charter for the university in 1785. The school wasn't built until 16 years later, when a board trustee named John Milledge purchased 633 acres and donated it to the school. As is the case today, if you make a big donation to a university, you get naming rights...thus, Athens, Georgia was born after Milledge suggested it as an homage to those heathen Greeks. Incidentally, the University of Miami stands on the future site of the town of "Nevin Shapiro, Florida."

3) 9-time Pro Bowl quarterback and NFL Hall of Famer Fran Tarkenton played for the Bulldogs...that much you probably knew. Did you know that Tarkenton was a member of the the Freemason youth group DeMolay? How about that he co-wrote a novel called Murder at the Super Bowl (loosely based on what the Giants did to Tom Brady in Super Bowl XLII) or runs a senior financial consulting business call Tarkenton Financial? I thought not. You uncultured types probably just think of him as "that guy from That's Incredible!". That's just sad. 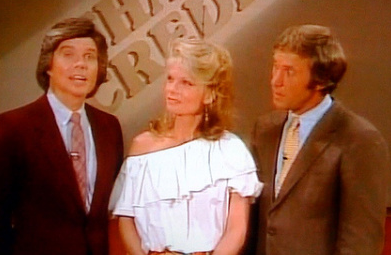 Tarkenton never hooked up with Cathy Lee Crosby. That is incredible.

2) Georgia's live bulldog mascot is known as Uga (get it?), and has been a staple at Georgia football games since 1956. The university is currently on their 9th iteration of UGA, as dogs only live so long, you see. The first 6 Ugas were actually quite long in the tooth, dogwise, serving for an average of 8.5 years, but the last two have only "been on the job" for a year apiece, with Uga VII suffering heart failure and Uga VIII dying of canine lymphoma (Uga V took his own life after a loss to Tennessee). All 8 deceased Ugas are entombed in a mausoleum near the entrance to Sanford Stadium. Good God, man...have these people not seen Pet Sematary?!

1) Chargin' Charlie Beckwith was once a member of the Georgia football team. He later was drafted by the Green Bay Packers, but said "no thanks, I'd rather stay a lieutenant in the U.S. Army". After stints in Korea and Vietnam, Beckwith formed the elite military group Delta Force, a unit so freaking awesome that Chuck Norris and Lee Marvin begged to be in a movie about it. If you want to read up on Delta Force, this article is a good place to start...or you could just watch this clip from the movie of the same name...it's practically a documentary.