There are 27 days left until kickoff and I needed a break...cue Mr. Mark Mace (hatemay) who jumped at the chance to do a write-up for who might be Boise State's next great running back. Thank you, Mark. You will join me in the hall of champions in Valhalla when this journey is through.

Pay no attention to the by-line...this countdown was written entirely by OBNUGer hatemay (except that amazing intro). 'Twas merely published by me. Well done, hatemay...thanks for keeping the countdown unbroken. 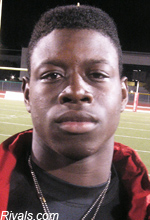 I think the highlight reel speaks for itself. Ajayi was a rushing machine out of Frisco Liberty High school where his senior year he rushed for an unreal 2,240 yards on 225 carries and 35 touchdowns. For those of us bad at math, that is 9.5 yards a carry, He also averaged a touchdown per 6.5 carries. As a junior Ajayi rushed for 1,627 yards on 209 carries. One can make a note of the increased rushing production of over 600 yards with only an additional 16 carries. Nothing in the schemes of Ajayi’s high school film suggests complicating or tricky schemes, in fact it is quite the opposite. Ajayi was the feature back in a zone-read offense, that allowed him to operate in the open space. Ajayi has great vison, extremely quick hips, hits the hole fast, takes long strides, and rarely goes down on first contact. Ajayi, despite making the roster for the 2011 Parade All-American team, only received other offers from, Minnesota, Tulane, Wyoming, and New Mexico State. Ajayi’s lack of overwhelming size must have limited his respect from "Blue Blood Programs" which must be why Boise State was all over this young man, and in return, Ajayi has been all about the Blue since LOI day.

Named second team all state as a Senior, first team all conference as a junior and senior, and made roster of Parade All-American high school football in 2011.

Being third string varsity running back as a sophomore… what a difference a year makes.

Ajayi will play. I expect him to be our third back behind Doug Martin and D.J. Harper. Martin will get the bulk of the carries, Harper will be used, but I expect the coaches to limit his reps early on, which will open up some carries for Ajayi. He will brought in to work on pass pro, and get accustomed to game speed. I expect as the season goes on for the coaching staff to have more faith in the young Ajayi and allow him more time. This year won’t be Ajayi’s time to shine but it will serve as a valuable teaching period for him to develop into a great Bronco running back. Ajayi takes long strides, reads his block, and has great speed in the open field, which will take the pressure off whoever replaces Kellen Moore. After the departure of Doug Martin, the Bronco backfield will be wide open. Depending on the health status of D.J. Harper, the scholastic status of Malcolm Johnson, I expect Ajayi to be getting most of the carries in the backfield. No disrespect to Raphiel Lambert or Drew Wright, but Ajayi possesses the qualities to be a big part of the Bronco offense of years to come.

To increase his strength, flexiblilty, and speed, Ajayi’s diet consists of large quantites of deer meat, carrots, lettuce, and whatever Chuck Norris is having.